After World War II, the United States entered a new modern age of technological innovation that profoundly changed the way that America cooked and ate. Through popular media, especially women’s magazines and the new medium of television, advertisers encouraged women to use Atomic Age technology to create the ideal home. Technology promised women the freedom from drudgery.

Appliance manufacturers, trade associations, and food product companies published dozens of cooking booklets in the post-World War II period to promote their products. They shared a common goal to market a modern, aspirational lifestyle in which the kitchen was a woman’s domain. At the same time, they trained women to adopt a new style of cooking.

Canned food as a commercial product dates to the 19th century. Van Camp, one of the earliest manufacturers still in operation, started in 1861 and supplied canned beans to the Union Army under a military contract. Returning veterans brought back a taste for the products along with an appreciation of the convenience. By the 20th century, canned food was common but it mostly supplemented diets rather than predominating at the table. This was in part because processed food was more expensive than fresh food. During World War II when nearly full employment brought canned goods and packaged foods within economic reach for more, rationing of canned goods limited their use in American kitchens. After the war, it was a different story. 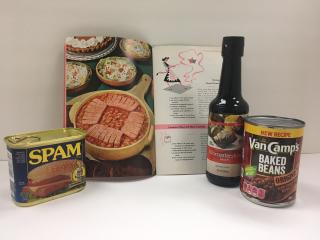 Where did women buy canned goods? From the supermarket. Between 1948 and 1958, the number of supermarkets in the United States doubled to over 2,500, with most of the expansion occurring outside central cities.

Supermarkets anchored a new post-war housing model. After World War II, planned communities sprang up across the country. Levittown on Long Island, in 1947, was the first of many. Marketed towards veterans eligible for low-interest, government backed mortgages, tens of thousands of families moved into the suburbs. The new suburban homes were constructed with the latest in modern technology, including the all-electric kitchen.

The modern 1950s kitchen included an electric range, refrigerator-freezer, dishwasher, washer and dryer, and an assortment of small appliances like skillets, blenders, and mixers. Consumers could even buy a Radarange microwave oven in the 1950s—though few did due to the exorbitant cost. Many of the appliances were marketed with cookbooks to teach women how to use them.

A housewife born in 1925 and living in a suburban tract house in 1950 did not grow up surrounded by electric technology. Her mother may have had a refrigerator, but it did not have a freezer with a separate door. And it didn’t come in a rainbow of colors. And she didn’t have five or six small appliances sitting on her counter top. 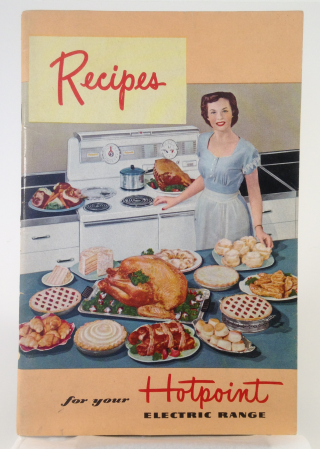 Push button technology took the drudgery, if not the boredom, out of housework. It also made it an incredibly isolating experience. At the beginning of the century, when women were cooking meals from scratch, sewing their own clothes, washing sheets and towels by hand, and buying fresh food from the market almost every day, it took a team of women to run a house. By the 1950s, it could be done by one person.

Lifestyle marketing recognized that many women found being a housewife somewhat less than fulfilling. There was a gradual transition from characterizing the womanly ideal from Housewife to Hostess. That was evident in the increasing number of recipes for party foods, party planning tips, and even more specialized serving pieces. 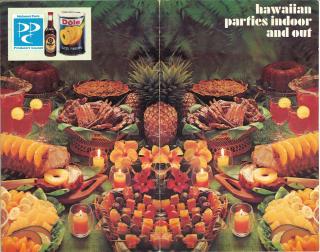 Some women took advantage of their increased free time by enrolling their children in activities like sports and scouts and ferrying back and forth to activities. Many women joined clubs and organizations. And there was an increase of the number of married women taking jobs, albeit mostly part time. Even as marketing touted the kitchen as a woman’s special domain, technology gradually reduced the amount of time she needed to spend there.

A 2016 study found that nearly 60% of the calories consumed in the modern, American diet come from processed foods. While the flavors and packaging have evolved with contemporary tastes, processed and packaged foods remain household staples. As does an emphasis on convenience.

Just like in the 1950s, technology has given women many more choices in how and where to spend their time. And no longer does the kitchen represent the aspirational ideal of womanhood. Contemporary women spend less time on household chores, including cooking, than their mid-century counterparts. Technology, media, and marketing in the 1950s changed the way women cooked and Americans eat.