The Truth vs. The Legend 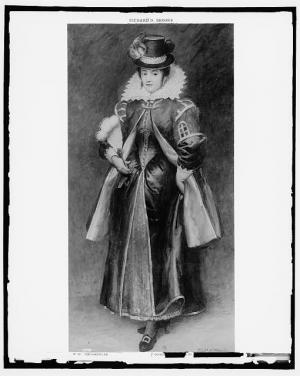 This lesson will provide students with an overview of Pocahontas’ short life and give them an opportunity to examine 5 different sources of information about the incident in which John Smith claimed that she saved his life. They will also look for similarities and differences between each account and cite evidence to support a declaration of what they believe happened to John Smith. The presentation in this lesson is accompanied by a cloze note activity.

One to three 50 minute class periods

Hand out copies of the Pocahontas Cloze Notes Student Handout.

Generate a KWL chart by asking the class to activate background knowledge. What do students already know about Pocahontas? What would they like to learn about her? What are they unsure about in her narrative? You can generate a class list on a board/document at the front of the class, or have students generate their own lists independently at the top of the Pocahontas Cloze Notes Student Handout in the area provided.

Pull up the Pocahontas Cloze Notes Presentation (either projected as an animated Powerpoint presentation or printed as a PDF for students to read with you). Have students complete their handout as you go through the information in the presentation.

After you discuss and review Pocahontas’ life, explain to students that they will now take a closer look at the singular event that John Smith made her name famous for. You can do this immediately after the Cloze Note presentation, or you can break these activities up over two or more separate days.

Guide students through the document, taking breaks to analyze each document together as a class or by working in small groups. Depending on the independence level of your students, this can be discussed entirely out loud in class together, document by document (recommended) or gradually released to small groups or even as independent student work.

By the end of the lesson, students should be familiar with variations in the story of Pocahontas saving John Smith’s life, as well as the romanticized misconceptions of her story as told by sources like Disney’s animated feature film. They will have learned about the Sedgeford Hall Portrait and how myths continue to be a part of Pocahontas’ narrative to this day. Students will be able to decide for themselves, and defend by citing sources, an opinion on what they believe actually happened to John Smith in 1607.

Students may read My Lady Pocahontas, a Young Adult Historical Fiction novel focused on the Pamunkey perspective of Pocahontas’ life. The author, Kathleen Kudlinski, named the protagonist Neetah, which is the Pamunkey word for “friend.” Students may complete one or more of the book report alternative assignment options from Scholastic. Alternatively, you may enjoy reading this novel out loud to the class.

You may have students who use the Disney movie Pocahontas as a frame of reference prior to this lesson. If you have enough free time and flexibility to watch the Disney movie as a class, you can create a Venn diagram of similarities and differences between historical accounts based on primary sources, and the animated movie. This can be a helpful exercise to correct student misconceptions about the romanticized relationship portrayed in the movie. There is an excellent chart that you can use to guide some of your class discussion points available at http://pocahontas.morenus.org/. Additionally, if students are mature enough, you can analyze whether or not the movie is itself a form of propaganda. The Disney movie may seem to divide well intentioned colonists from malicious colonists and this may present the genocidal war against Indians as the result of “bad” colonists instead of the era of colonialism and the original mission of the Virginia Company of London. The story is romanticized and may contribute to perpetuating the Pocahontas myth. Discuss with your class: If history is converted into a myth, then who is responsible for how the myth is disseminated into a culture? Who is responsible when myths and stories cause interference with history? Whose fault is it for not seeking out the truth in the difference if myths are perpetuated? Is it Disney's fault for telling an easy, seductive story that makes us feel better about what happened?

CS D2.His.16.6-8. Organize applicable evidence into a coherent argument about the past.

CCSS.ELA-LITERACY.RH.6-8.2
Determine the central ideas or information of a primary or secondary source; provide an accurate summary of the source distinct from prior knowledge or opinions.

CCSS.ELA-LITERACY.RH.6-8.6
Identify aspects of a text that reveal an author's point of view or purpose (e.g., loaded language, inclusion or avoidance of particular facts).

D2.His.15.6-8. Evaluate the relative influence of various causes of events and developments in the past.

CCSS.ELA-LITERACY.RH.6-8.8
Distinguish among fact, opinion, and reasoned judgment in a text.

CCSS.ELA-LITERACY.RH.9-10.6
Compare the point of view of two or more authors for how they treat the same or similar topics, including which details they include and emphasize in their respective accounts.

CCSS.ELA-LITERACY.RH.9-10.9
Compare and contrast treatments of the same topic in several primary and secondary sources.

C3: D1.5.9-12. Determine the kinds of sources that will be helpful in answering compelling and supporting questions, taking into consideration multiple points of view represented in the sources, the types of sources available, and the potential uses of the sources

CCSS.ELA-Literacy.RH.11-12.2 Determine the central ideas or information of a primary or secondary source; provide an accurate summary that makes clear the relationships among the key details and ideas.