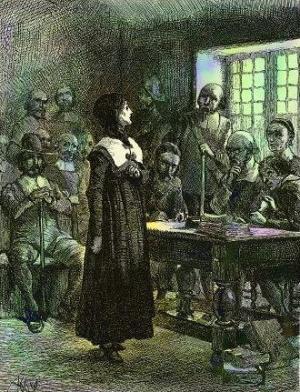 Anne Hutchinson, in the 1630s, dared to demand that women have equal status in the Massachusetts Bay colony.  This demand led to her leading mass meetings, then two court trials, banishment, and, finally her death.  This lesson discusses Anne Hutchinson’s life and defying the misogyny of her times.

Students will complete the “Packing for exile” worksheet.  Some examples of correct answers are below.   Multiple items in each section are acceptable, as long as each one is specific.

The following materials are good for extensions into Anne Hutchinson’s life, her trial, and the fate of the family.