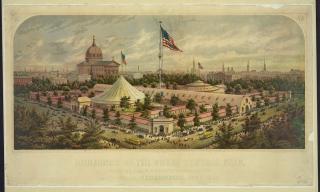 Buildings of the Great Central Fair, in aid of the U.S. Sanitary Commission, Philadelphia, June 186.

During the Civil War, reformers focused on the war effort rather than organizing women’s rights meetings. Many woman's rights activists supported the abolition of slavery, so they rallied to ensure that the war would end this inhumane practice.

African American women played a crucial part in the war effort. Harriet Tubman had been helping slaves escape to freedom since 1851. Because of her network of friends and familiarity with the landscape, she also became a spy for the Union Army during the war. The Women’s Loyal National League raised money to support Tubman’s work. Sojourner Truth, the prominent reformer and lecturer, envisioned what life would be like for newly freed men and women and led efforts to settle freed people in Kansas.

Although the Civil War temporarily disrupted the women’s rights movement, women’s efforts and the organizations they created laid the foundations for a stronger movement after the war.