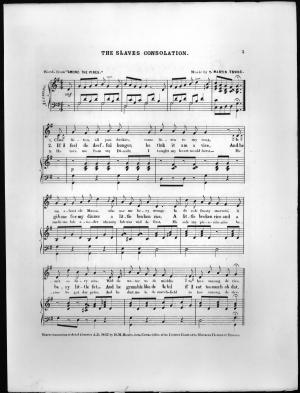 In the United States, the tradition of protest songs dates to pre-Revolutionary War and flourished during the war. Probably the best known is "Yankee Doodle," which was used by both armies to satirize the other. As the British marched away after the surrender at Yorktown, they ignored the American army. The Marquis de Lafayette ordered his band to play Yankee Doodle.

Throughout the 18th and 19th centuries, tunes familiar to the general public were repeatedly “recycled.” New song lyrics would simply say, sung to the tune of “insert song name here.” The melody for the Star-Spangled Banner, for instance, was taken from “To Anacreon in Heaven,” a drinking song from the Anacreon Club in London.

Popular protest songs of the 19th century, like other popular songs of the period usually gave instructions to use a well-known tune. Consider this mid-19th suffrage song which was set to the tune of “My Country tis of Thee”:

Our country, now from thee,
Claim we our liberty,
In freedoms name
Guarding homes altar fires,
Daughters of patriot sires,
Their zeal our own inspires,
Justice to claim.

Unlike many of the spirituals that defined abolition and slavery; the vast majority of suffrage music was not passed down through generations and was never recorded. However, sheet music provides a strong connection to the ideas and actions of the Suffrage Movement.

The music of the abolition movement embraced African musical traditions. The enslaved community used music to set pace for work, to worship, to teach, and to celebrate. The abolition movement and, particularly the Underground Railroad were defined by traditional spirituals. “Follow the Drinking Gourd,” “Go Down Moses,” “Swing Low Sweet Chariot,” and “Wade in the Water” are just a few of the songs associated with the movement. As the 19th century progressed, and more anti-slavery societies were established; anti-slavery songs and sheet music began to enter popular culture. “Get off the Track” performed by the Hutchinson Family was one of the most popular:

Ho! The car Emancipation
Rides majestic thro' our nation,
Bearing on its train the story,
Liberty! A nation's glory.
Roll it along, thro' the nation,
Freedom's car, Emancipation!

First of all the train, and greater,
Speeds the dauntless Liberator,
Onward cheered amid hosannas,
And the waving of free banners.
Roll it along! Spread your banners,
While the people shout hosannas.
Let the ministers and churches
Leave behind sectarian lurches;
Jump on board the car of Freedom,

Ere it be too late to need them.
Sound the alarm! Pulpits thunder!
Ere too late you see your blunder!
All the true friends of Emancipation,
Haste to Freedom's railroad station;
Quick into the cars get seated,
All is ready and completed.
Put on the steam! All are crying,
And the liberty flags are flying.

Other popular songs included "Stolen Souls from Africa,” "Jonathan's Appeal to Caroline," "Slavery is a Hard Foe to Battle," "We Wait Beneath the Furnace Blast," and "The Slave's Consolation.”

The music of the Civil Rights Movement was defined by a blend of spirituals, jazz, and blues including Nina Simone’s “I Wish I Knew How It Would Feel to Be Free” and Grant Green’s “Selma March.” Sam Cooke’s “A Change is Gonna Come” quickly became an anthem of the movement as did “We Shall Overcome,” a gospel song from the late 19th/early 20th century that was a standard song of protest for workers in the south. In the late 1950s, folk singer Pete Seeger recorded the song which quickly became a symbol of non-violent protest. “People get Ready” by The Impressions and “The times they Are a’Changin” written by Bob Dylan are just two of the many protest songs which became popular hits on the musical charts; carrying the message and ideas of protest across the nation and the world. The assassination of Martin Luther King, Jr. continues to resonate, and his legacy was honored through music by such groups as U2, Queen, Ben Harper, Stevie Wonder, Bruce Springsteen, Public Enemy, and Will.I.am.

For the first time in history, television brought the horrors of war into American’s living rooms during the Vietnam War. Americans were horrified by the scenes of destruction and of wounded and dead American soldiers being carried to helicopters. And, they questioned the purpose of the war.

The music of the Vietnam War became the soundtrack of the 1960s. From “Eve of Destruction” in 1965 to “Ohio” by Crosby, Stills, Nash & Young which decried the killing of student protestors at Kent State in 1970; the musicians and music focused attention on protesting the war.

We often forget that music is more than a means of deriving pleasure. In every generation of protest; music has played a key role in defining injustice, the struggle for equality, and the desire for peace. Music defines social and historic values.