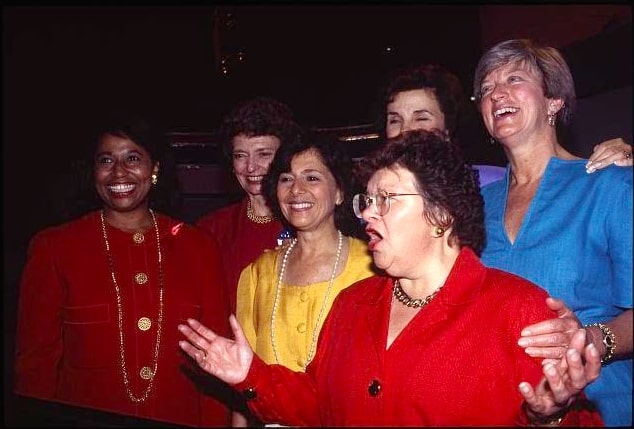 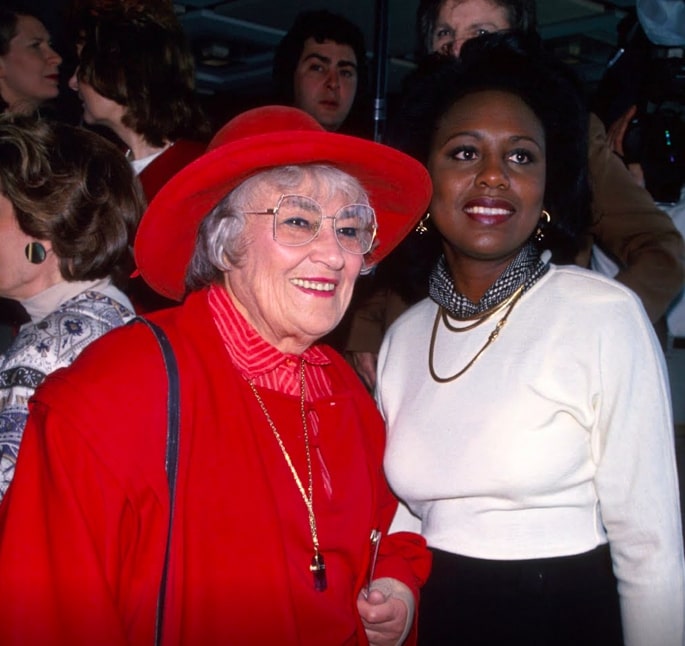 Much like the first and second waves, it is difficult to pinpoint exactly when the third wave of the feminist movement began. However, this resurgence of women’s rights activism is traditionally seen as a response to mainstream second wave feminism. As the third wave started in the 1990s, women’s rights activists longed for a movement that continued the work of their predecessors while addressing their current struggles. In addition, these women wanted to create a mainstream movement that was inclusive of the various challenges women from different races, classes, and gender identities were facing. Image: (L-R) Second Wave feminist Bella Abzug with law professor Anita Hill. 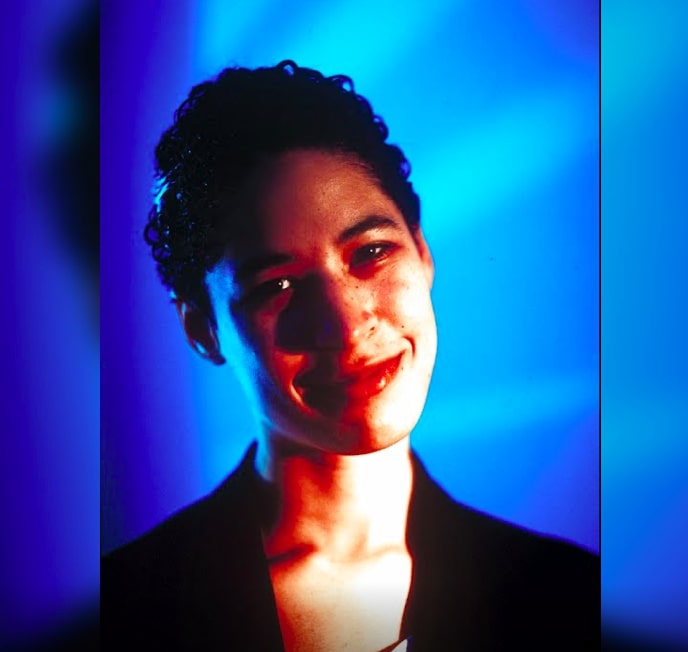 Although it is difficult to isolate the single incident that started the third wave, there are two events that are traditionally credited with inspiring a new generation of women’s rights activists. The first one was the 1991 Anita Hill hearings that sparked national feminist support when Hill testified against a Supreme Court nominee for sexual harassment. While watching the hearings, Rebecca Walker, daughter of second wave icon Alice Walker, began describing the political climate as ”The Third Wave.” In addition, beginning in the 1990s, underground feminist punk rock bands surfaced in “Riot Grrrl” groups. These “girrl” groups combined punk culture with politics, feminism, and style. Both of these occurrences helped to usher the feminist movement into a new era of women’s activism. 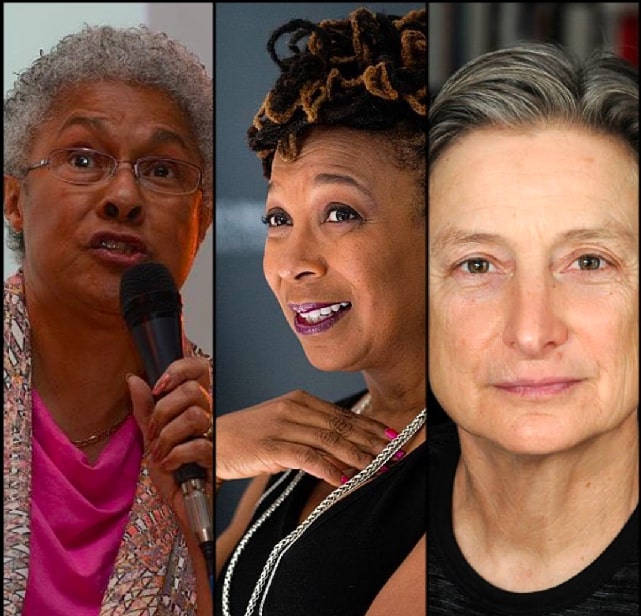 Right at the beginning of the third wave, feminist scholars started to publish new literature that helped readers better understand feminist theory. In 1989, lawyer and theorist Kimberlé Crenshaw developed “intersectionality” to show how someone’s various identities (race, class, gender, etc.) overlap to influence how they are treated. This theory led to “intersectional feminism,” that formed as a response to the multiple ways women are oppressed. In 1990, two other revolutionary scholars incorporated the idea of intersectionality into their work. Judith Butler’s “Gender Trouble: Feminism and the Subversion of Identity” and Patricia Hill Collins’ “Black Feminist Thought: Knowledge, Consciousness and the Politics of Empowerment” both approach feminist theory by studying women’s social and political identities. 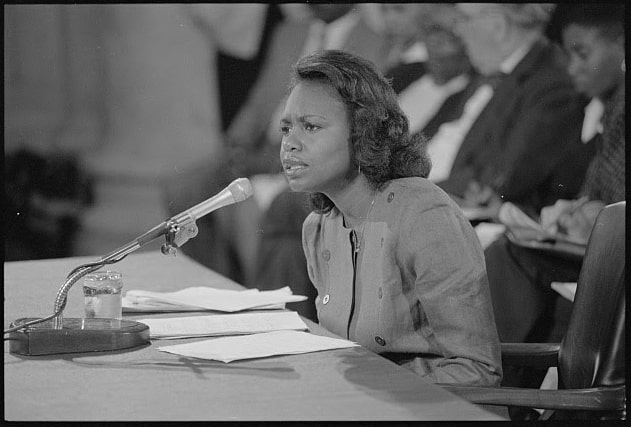 On October 11, 1991, the world watched as attorney Anita Hill testified against U.S. Supreme Court nominee Clarence Thomas for sexual harassment. In the televised hearings before the Senate Judiciary Committee, Hill declared that Thomas had repeatedly harassed her while she was his employee at the Department of Education and the Equal Employment Opportunity Commission. According to Hill, when she worked as his aide, Thomas frequently pressured her to go on dates and often made sexually inappropriate comments during their work conversations. Despite Hill’s testimony, Thomas was still confirmed as a Supreme Court Justice after the three-day hearings. 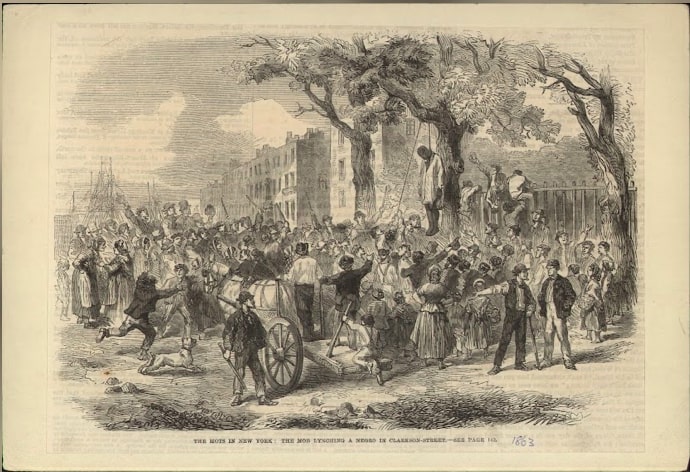 Although both Thomas and Hill were African American, Thomas believed that the hearing against him was equivalent to a “high tech lynching.” This metaphor suggested that he was being persecuted because of his race. As they both testified before an all-white, all male committee, the history of African American women also being lynched and persecuted was not discussed. Lawyer and author of the ”intersectionality” theory Kimberlé Crenshaw was a member of Hill’s legal team. She later wrote that the belief that lynching was the ultimate symbol of racist terror “erased black women from the picture.” In addition, one of the most prominent historical figures against the lynching of African Americans was a black woman. 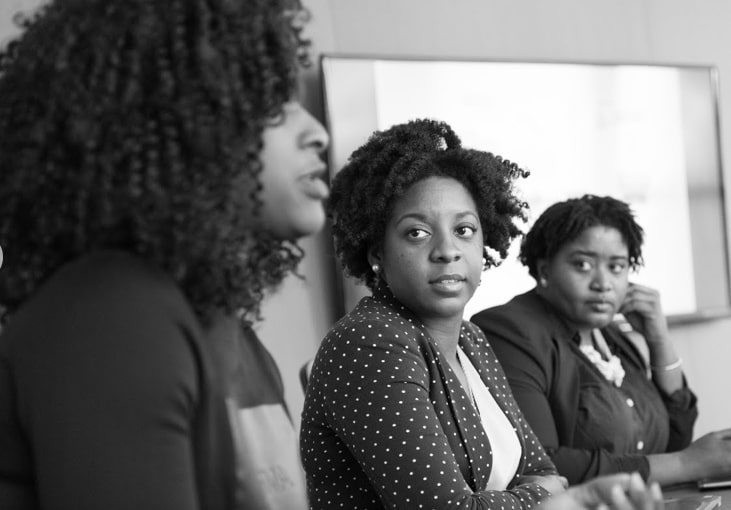 After the hearings, African American feminists and historians across the United States came together and collectively raised $50,000 to purchase a full-page ad in the New York Times. Their manifesto entitled, “African American Women in Defense of Ourselves,” was signed by 1,600 women including black feminist historians Barbara Ransby, Deborah King and Elsa Barkley Brown. These women fought against the treatment of Hill during the hearings and stated; “We are particularly outraged by the racist and sexist treatment of Professor Anita Hill, an African American woman who was maligned and castigated for daring to speak publicly of her own experience of sexual abuse.” Following Hill’s story, many other women had the courage to speak out against their own experiences with sexual misconduct. 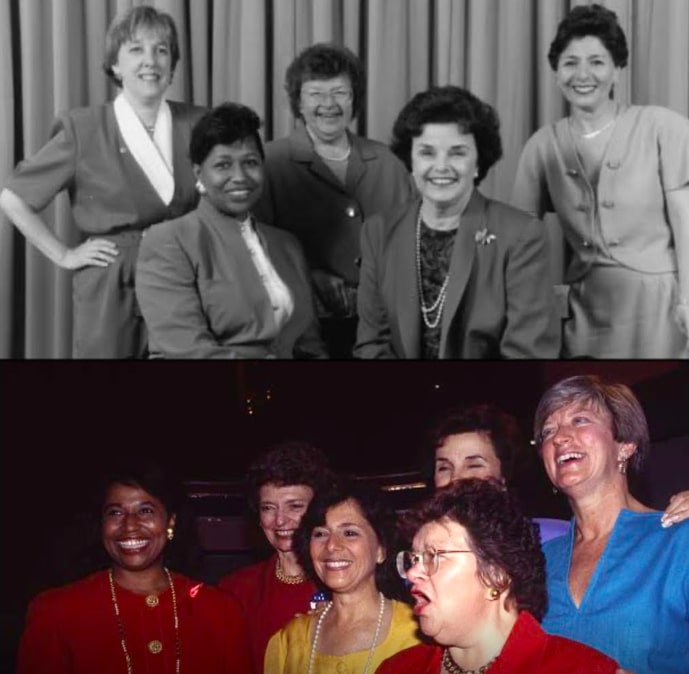 The Year of the Woman

For many mainstream feminists, the Hill case marked a turning point in women’s activism. Not only were women speaking publicly about sexual assault, but the visibility of the case also caused women to question the male-dominated leadership in Congress. Before the hearings, seven democratic women from the House of Representatives marched over to the Senate to demand a further investigation of the accusations against Thomas. Although he was still confirmed as a justice, feminists began to push for a more active role in political leadership. The very next year, more women were elected to Congress on voting day than in any previous decade. That year became known as “The Year of the Woman,” and 27 women were elected to Congress. 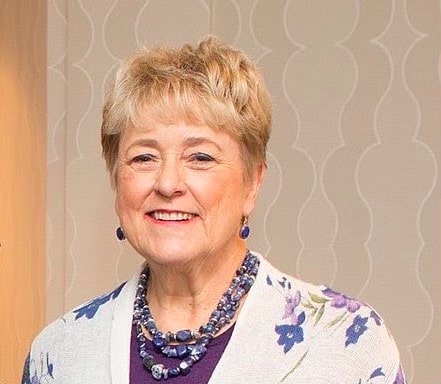 One of the early women’s groups that contributed to the success of The Year of the Woman was “EMILY's List.” This women’s political network provided the fundraising and resources necessary for an endorsed candidate to successfully run for political office. These women used the strategy of raising money early in a candidate’s campaign so it would attract more donors. This principle was the foundation of the organization’s name “EMILY's List” that is an acronym for "Early Money Is Like Yeast,” because yeast “makes the dough rise.” EMILY's List continues to endorse pro-choice Democratic women running for office to this day. 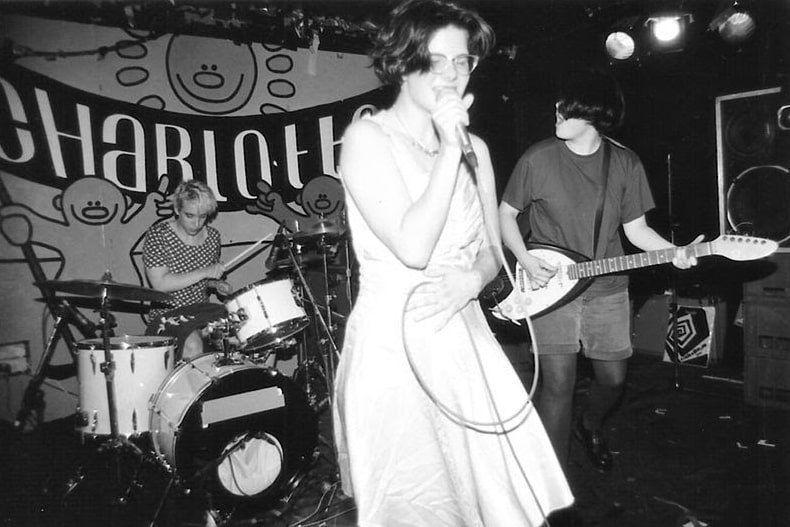 In addition to political affinity groups, punk rock musicians also began to emerge with distinctly feminist agendas. Responding to various forms of sexism, feminist musicians decided to organize a “girl riot” through their activism. These women started their own bands and created their own publications dedicated to women’s empowerment. Much of their content addressed issues including; sexism, patriarchy, abuse, racism, sexuality and rape. Popular bands such as Bikini Kill, Bratmobile, and Heavens to Betsy, all lead this trend of activism. 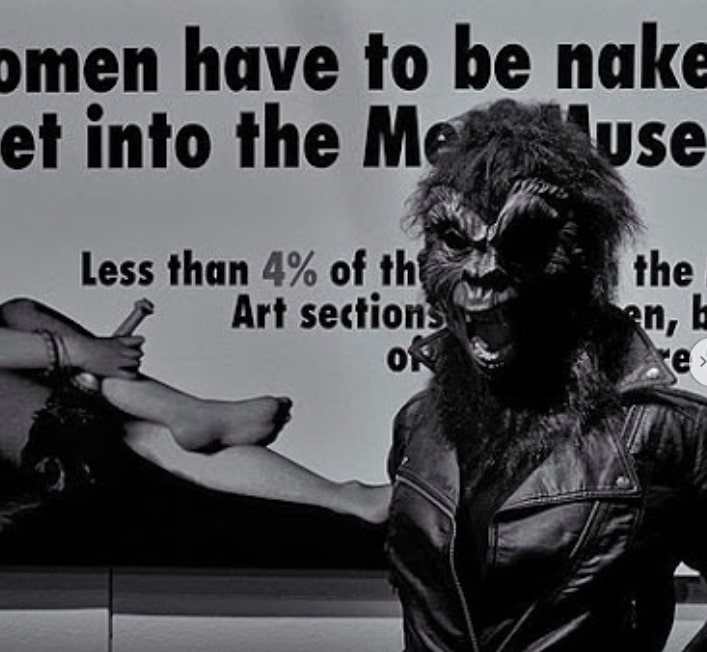 Prior to the evolution of the Riot Grrrl Movement, the Guerrilla Girls set the foundation for radical feminist revolt. They formed in 1985 in response to sexism and racism in the art world. This anonymous group of feminist artists from New York City decided to take the feminist art movement one step further by intentionally disrupting the status quo. These women created posters, billboards, and made public appearances in gorilla masks to reveal the sexist and racist practices in the creation and study of visual art. One of their most famous posters was an image of a naked woman in a gorilla mask next to the phrase “Do women have to be naked to get into the Met. Museum?” The poster also provides the statistics that show the low number of women featured in the Modern Art sections, compared to the high percentage of nude art that features women. 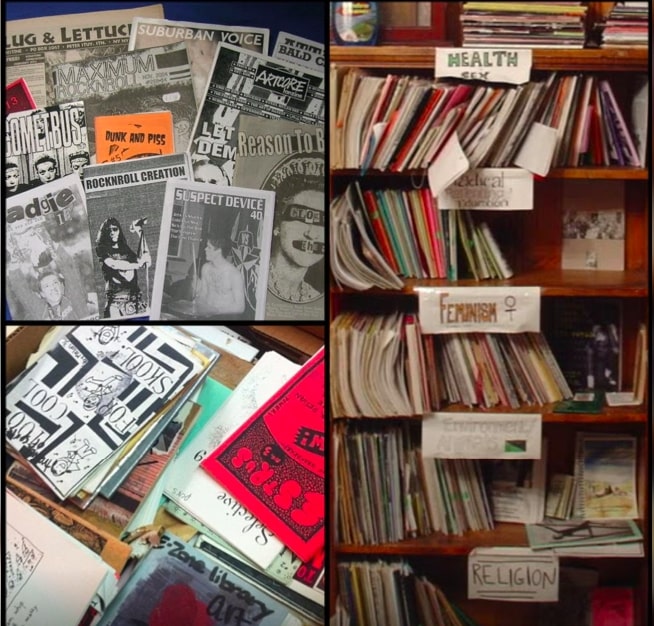 Starting in the early 1990s, radical feminist art seeped into the music world as women affiliated with the Riot Grrrl feminist movement emerged in Olympia, Washington. One of the frontrunners of this movement was Kathleen Hanna, the lead singer of the feminist band Bikini Kill. After collaborating with other Riot Grrrl artists on a small magazine called “Riot Grrrl,” The Bikini Kill Zine (fanzine) was created. These “zines” used punk rock culture to address feminist issues. By 1991, the Bikini Kill Zine published the Riot Grrrl Manifesto that clearly outlined the reasons for this recent surge of feminist activism through music. 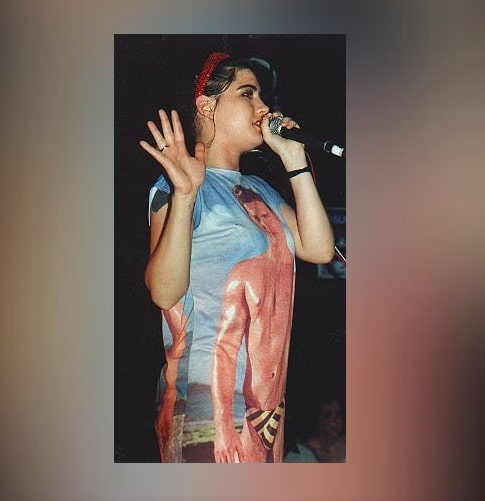 Statements from The Riot Grrrl Manifesto, published in 1991 in the Bikini Kill Zine 2:

BECAUSE us girls crave records and books and fanzines that speak to US that WE feel included in and can understand in our own ways.

BECAUSE we wanna make it easier for girls to see/hear each other's work so that we can share strategies and criticize-applaud each other.

BECAUSE we don't wanna assimilate to someone else's (boy) standards of what is or isn’t.

BECAUSE we are angry at a society that tells us Girl = Dumb, Girl = Bad, Girl = Weak. 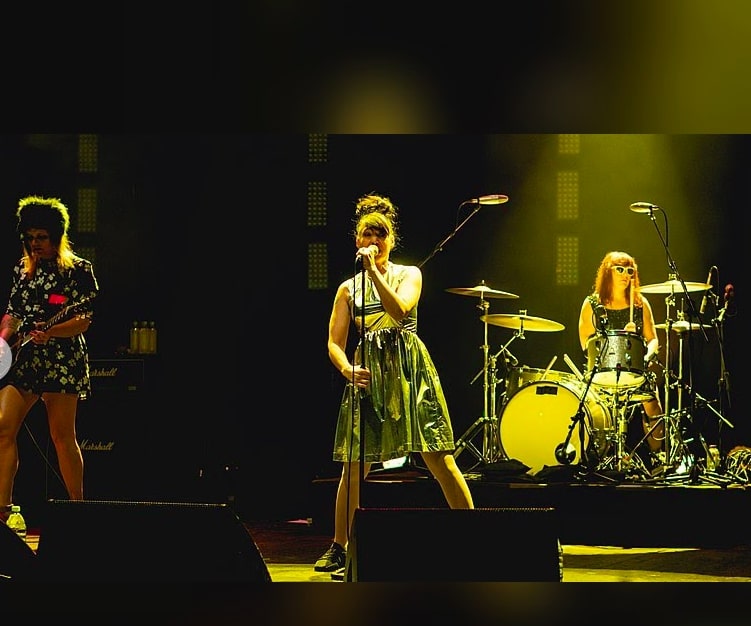 Many women flocked to these punk rock groups that valued self expression and collective revolt. Kathleen Hanna was known for empowering women at her concerts by shouting “Revolution Girl Style Now!” or “Girls to the front!” to encourage her female attendees to come to the front of the audience. Not only did this provide a safe space for women at rock concerts, but this practice also became a symbol of the call for women to be brought to the forefront in all areas of life. As the movement grew, other Riot Grrrl bands developed across the country and established nationwide chapters. Many of these feminists played their music during pro-choice rallies and advocated for the reproductive rights of women. By the mid-1990s, Riot Grrrl bands became so well-known that pop culture started to incorporate some of the movement’s terminology. The phrase “Girl Power,” was often used by Bikini Kill and could be found throughout the pages of Riot Grrrl zines. However, this phrase quickly became a pop culture slogan after girl groups like The Spice Girls started promoting a “girl power” theme. Due to the mixed messaging, mainstream media began to attach the political Riot Grrrl groups to pop culture bands that were not associated with the movement. Many Riot Grrrl groups spoke out against this media misrepresentation, but unfortunately it had already become a pop culture phenomenon. In response, several Riot Grrrl groups dissolved. However, many former participants continued to make political music. Even though Bikini Kill released their last album in 1996, lead singer Kathleen Hanna has continued to merge music and activism. 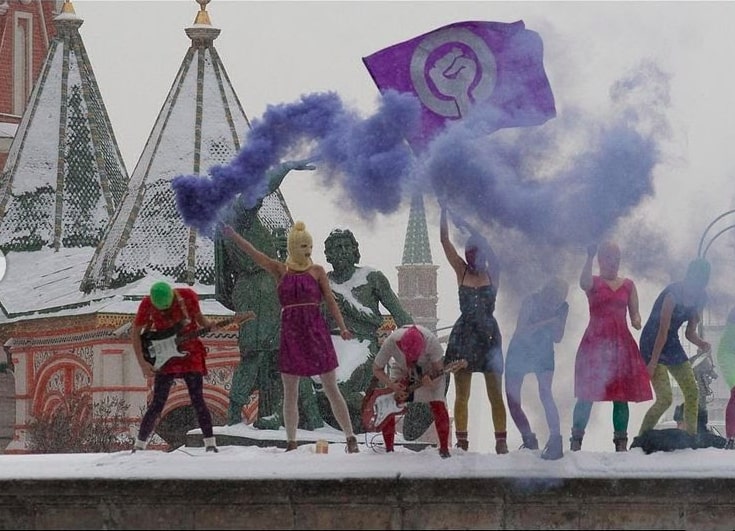 Although the prominence of Riot Grrrl groups was short lived, their specific brand of feminism resonated with many women that may not have identified with the concerns or practices of mainstream “cookie-cutter” feminism. These Riot Grrrl groups inspired radical global activism for decades to come, with Riot Grrrl bands and chapters forming in Asia, Europe, Australia, and Latin America well into the 2000s. 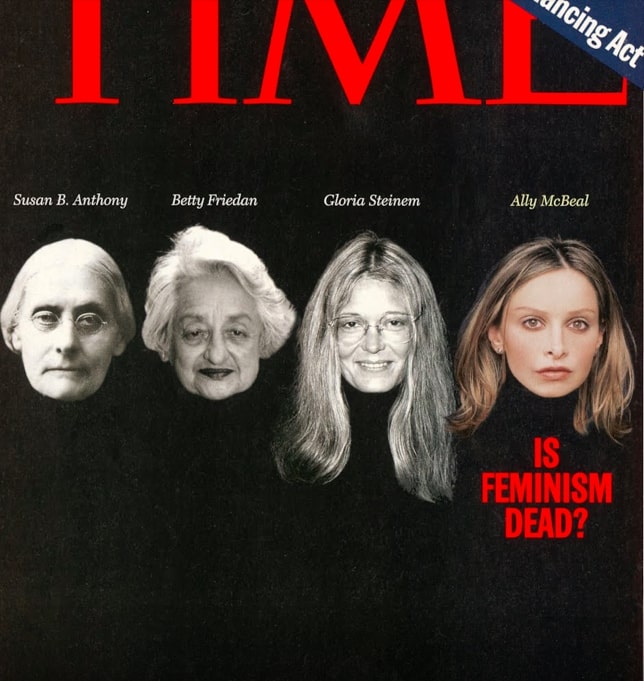 The End of the Third Wave?

As third wave feminists transitioned into the 21st century, it was clear that there were several individualized goals of the movement. Women spoke out in various interest groups about everything including abortion, eating disorders, and sexual assault. However, the Anita Hill hearings and Riot Grrrl groups of the early 1990s were central to the development of this third wave. In 2003, Robin Morgan edited an updated version of her original feminist anthology written in 1970. Her new edition called, “Sisterhood Is Forever: The Women's Anthology for a New Millennium,” featured pieces by both Anita Hill (“The Nature of the Beast: Sexual Harassment”) and Kathleen Hanna of the Riot Grrrl movement (“Gen X Survivor: From Riot Grrrl Rock Star to Feminist Artist”). Some scholars believe that the third wave never came to an end and it continues on to this day. However for others, new technology and social campaigns have marked the beginning of a fourth wave of feminism.

Adewunmi, Bim. “Kimberlé Crenshaw on Intersectionality: ‘I Wanted to Come up with an Everyday Metaphor That Anyone Could Use.’” NewStatesman, April 4, 2014. https://www.newstatesman.com/lifestyle/2014/04/kimberl-crenshaw-intersectionality-i-wanted-come-everyday-metaphor-anyone-could.

“Guerrilla Girls: 'You Have to Question What You See' .” Tate Modern, October 5, 2018. https://www.tate.org.uk/art/artists/guerrilla-girls-6858/guerrilla-girls-interview-tateshots.

Harris-Perry, Melissa. “Where Are All the Black Feminists in Confirmation?” ELLE, April 18, 2016. https://www.elle.com/culture/career-politics/news/a35699/hbo-confirmation-black-feminists/.

“The Year of the Woman, 1992.” US House of Representatives: History, Art & Archives. Accessed May 10, 2020. https://history.house.gov/Exhibitions-and-Publications/WIC/Historical-Essays/Assembling-Amplifying-Ascending/Women-Decade/.

This exhibit is also avilable in Spanish.