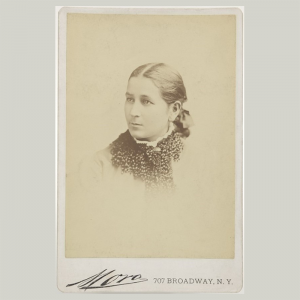 “"Peaceful revolutions are slow but sure. It takes time to leaven a great unwieldy mass like this nation with the leavening ideas of justice and liberty, but the evolution is all the more certain in its results because it is so slow.’" Susette La Flesche Tibbles, an Omaha woman, spent her entire life tirelessly campaigning for Native American rights as a speaker, activist, interpreter, and writer.

La Flesche was born in Bellevue Nebraska in 1854, the oldest daughter of Joseph La Flesche. Her father, known as “Iron Eyes,” was the last recognized chief of the Omaha tribe. 1854, the year of La Flesche’s birth, was a consequential one for her people; that year the Omaha gave up their hunting grounds and move to a reservation in northeastern Nebraska. La Flesche grew up on the Omaha Reservation with her family. One of her younger sisters, Susan La Flesche Picotte, became the first Native American physician.

After finishing at the Presbyterian Mission Boarding Day School, La Flesche expressed interest in continuing her education. Her father supported her and made arrangements in 1869 for La Flesche to attend the Elizabeth Institute for Young Ladies, a private school at Elizabeth, New Jersey. While there, she excelled as a student and as was known for her abilities as a great writer. The New York Tribune published an essay she wrote in her senior year. After graduating, La Flesche returned to the reservation and was accepted to teach at the government school on the reservation. She taught at the school for several years.

While she was teaching on the reservation, the U.S. government was dislocating and discriminating against other Native American tribes. In 1877, the Ponca Tribe was forced to move to Indian Territory in Oklahoma. La Flesche’s paternal grandmother was Ponca, so she and her father went to the reservation to investigate the conditions under which the Ponca lived. As part of their efforts, La Flesche served as an interpreter for Standing Bear during his 1879 trial. Standing Bear was a Ponca chief who sued the U.S. Government for its treatment of his people. Standing Bear, with La Flesche’s help, won his case, Standing Bear v. Crook, which ruled: “An Indian is a person within the meaning of the law of the United States.” The ruling, an important one for Native American civil rights, meant Native Americans were able to choose where they wanted to live. LaFlesche also worked with Thomas H. Tibbles of the Omaha Herald to publicize the Ponca’s plight. Because of her advocacy for the community, La Flesche got the Native American name Inshta Theumba (“Bright Eyes”). She began going by “Bright Eyes” after the trial.

Energized by the terrible conditions she saw and the role she played in Standing Bear’s trial, La Flesche began serving as an expert witness and interpreter in court cases in which Native Americans sued the U.S. Government. She was also a speaker, organizing speaking tours for others and herself in which they would speak out against injustice towards Native Americans. One East Coast tour that La Flesche organized for Standing Bear, Tibbles, her brother, and herself was quite successful. During the tour, poet Henry Wadsworth Longfellow entertained La Flesche and her co-speakers in his home.

In 1882, La Flesche married Tibbles. Together, they continued to travel, speak, and advocate for Native Americans. They did a speaking tour in England and Scotland where they met royalty and famous literary figures. La Flesche and her husband continued to appear in front of Congressional committees, presenting their concerns about the lack of Native American rights. Her testimony helped pass the 1887 Dawes Act, considered a progressive law of benefits for the tribes at the time. In 1891, the couple traveled to South Dakota to investigate the Battle of Wounded Knee, a series of events that resulted in the death of 250-300 Native Americans, and the problems Native Americans were experiencing on the reservation.

Alongside all this advocacy, La Flesche continued to write and worked with her husband. She died at age 49 on May 26, 1903 at her home near Bancroft. She was eulogized in the U.S. Senate and recognized for her contributions to the cause of Native American rights. She was inducted in the National Women’s Hall of Fame in 1994.