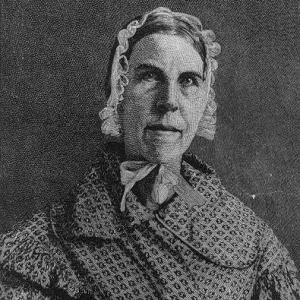 Even though Sarah Moore Grimké was shy, she often spoke in front of large crowds with her sister Angelina. The two sisters became the first women to speak in front of a state legislature as representatives of the American Anti-Slavery Society. They also became active writers and speakers for women’s rights. Their ideas were so different from most of the ideas in the community that people burned their writings and angry mobs protested their speeches. However, Grimké and her sister would not let that stop her from making a difference for women and African Americans.

Born on November 26, 1792, Sarah Grimké came from a rich family of slave holders in Charleston, South Carolina. She lived with her mother Mary Smith and her father John Faucheraud Grimké, who was a head judge of the state supreme court. Her parents gave her private tutors and her lessons included painting, sewing, and music. However, she wanted to learn all of the interesting subjects they taught the boys in school. Her older brother Thomas was a student at Yale College (now Yale University) and taught her what he learned in his classes. He taught her many subjects including Latin and Greek, mathematics, and geography. While she spent time reading and learning, her father enslaved hundreds of people that were not allowed to go to school. She began to teach some of the enslaved people how to read until her father would not allow her to teach them anymore. She began to see how badly people treated African Americans.

In 1819, Sarah visited Philadelphia, Pennsylvania with her father and met many members of the Quaker religion. The Quakers she met believed that slavery was evil, and that it was their responsibility to help the people that were suffering in society. They also allowed women to become preachers and leaders in the church. Grimké liked their ideas about women and slavery and decided to move there to become a Quaker in 1821. A few years later, her sister Angelina joined her in Philadelphia. They both became members of anti-slavery groups and began speaking out against the treatment of African Americans. In 1836, Angelina published a booklet called An Appeal to the Christian Women of the South, and Sarah published one called Epistle to the Clergy of the Southern States. Both booklets argued against slavery. Leaders in the South were so offended by their ideas against slavery, that they burned the booklets and warned Sarah and Angelina that they would be arrested if they ever came back to South Carolina. The General Association of Congregational Ministers of Massachusetts also did not like their writings and did not like that they were giving speeches in front of men, so they wrote a public statement against the Grimké sisters.

Sarah and Angelina kept writing even though it was dangerous. Their next booklets addressed women’s rights and the reasons they should help African American people. Angelina wrote Appeal to the Women of the Nominally Free States in 1837, while Sarah wrote Letters on the Equality of the Sexes and the Condition of Women in 1838. Now living in New York, Sarah wrote about the poor treatment of women and enslaved people. She continued to speak in front of large crowds with her sister. When her sister decided to marry an abolitionist named Theodore Dwight Weld, the Quaker religious group kicked them out because Weld was not a Quaker. Together, the three of them published American Slavery As It Is: Testimony of a Thousand Witnesses in 1839. Shortly after, they moved to New Jersey and began working in education. They started taking in students to live with them in 1848, and by 1851 they were the leaders of a boarding school. They opened a second school in Eagleswood, New Jersey and taught students until 1862. During this time, the American Civil War broke out over the issue of slavery. Grimké decided to write to support President Abraham Lincoln and the war to end slavery. Shortly after this, the Grimké sisters welcomed their African American nephews Archibald Henry Grimké and Francis James Grimké into their home. The boys were the sons of their brother Henry and a woman he enslaved named Nancy Weston. The Grimké sisters supported the boys as they went on to Harvard Law School (Archibald) and Princeton Theological Seminary (Francis).

Grimké continued to fight for women’s rights and the fair treatment of African Americans for the rest of her life. She was the vice president of the Massachusetts Woman Suffrage Association in 1868. A few years later, she led a group of women in Hyde Park, Boston to vote in the local election even though it was against the law. Even at 79-years-old, she was known for walking up and down the street, passing out copies of John Stuart Mill’s book Subjection of Women. Sarah Grimké died on December 23, 1873.