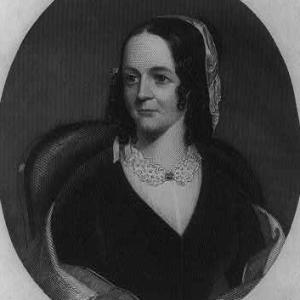 Poet, Sarah Josepha Hale is best known for creating the nursery rhyme “Mary Had a Little Lamb.” However, her work extends far beyond her writing. Her influence can be seen in historic sites and a famous national holiday still widely celebrated today.

Sarah Josepha Hale was born on October 24th, 1788 in Newport, New Hampshire. Her parents were strong advocates for education of both sexes. Therefore, Hale was taught well beyond the normal age for a woman. Later, she married a lawyer David Hale, who supported her in all scholarly endeavors. Sadly, her husband died after only nine years of marriage, leaving Hale a widow with five children. She turned to poetry as a form of income.  Her most famous book, titled Poems for Our Children included a beloved story from her childhood. “Mary Had a Little Lamb” was instantly a popular nursey rhyme.

In 1837, she became the editor of the Godey’s Lady’s Book. Her work with the magazine made her one of the most influential voices in the 19th century. Her columns covered everything from women’s education to child rearing. Hale also used her platform to support other causes, including abolishing slavery and, later, colonization (freeing African Americans and sending them to Africa). While working as editor, she raised money for various historic sites. Hale helped to preserve George Washington’s home and financially supported the construction of the Bunker Hill Monument. Her work in historic preservation has stood the test of time, as both sites are still open to public.

Hale has been criticized heavily for her support of gender roles. As an editor, she encouraged women to focus their efforts in the domestic realm. A proper woman, to Hale not only managed the home but she also imparted religion to her children. Godey’s Lady's Book was widely known for its conservative views for much of the 19th century. Additionally, Hale did not support the women’s suffrage movement because she believed that women’s participation in politics would limit their influence in the home. However, Hale did use the magazine to advocate for the education of women and the rights of women as property owners.

Hale used her persuasive writings to support the creation of Thanksgiving as a national holiday. Beginning in 1846, she charged the president and other leading politicians to push for the national celebration of Thanksgiving, which was then only celebrated in the Northeast. Her requests for recognition were largely ignored by politicians until 1863. While the nation was in the middle of the Civil War, President Lincoln signed into action “A National Day of Thanksgiving and Praise.” Hale’s letter to Lincoln is often cited as the main factor in his decision. Hale retired as editor in 1877 and died two years later at the age of 92.