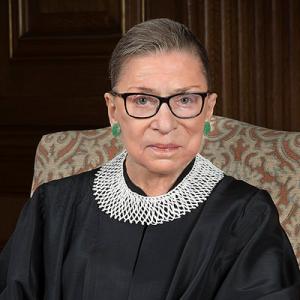 Affectionately called “R.B.G.” by her supporters, Ruth Bader Ginsburg has inspired generations of women to break gender barriers. Even after facing gender discrimination as she pursued her academic goals, Ginsburg forged ahead and became the second woman--and first Jewish woman--to serve on the Supreme Court.

Ruth Bader Ginsburg was born on March 15, 1933 in Brooklyn, New York. Born to a Jewish family, her father Nathan Bader immigrated to the United States, while her mother Celia Amster Bader was a native of New York. Ginsburg’s family valued education and instilled in her a love of learning. She attended P.S. 238 for elementary school and James Madison High School in Brooklyn before continuing on to attend Cornell University. Ginsburg graduated from Cornell with a bachelor’s degree in 1954, earning high honors in Government and distinction in all subjects. She was also the College of Arts and Sciences Class Marshal. That same year, she married Martin D. Ginsburg and the couple have two children together.

After graduating from Cornell, Ginsburg subsequently started attending Harvard Law School. While at Harvard, Ginsburg was one of only 9 women in a class of 500 students. She often faced gender discrimination and was asked to explain how she felt about taking a spot in the program instead of a man. Ginsburg and her female colleagues were called on in class for “comic relief” and they were even excluded from using certain sections of the library. Ginsburg transferred to Columbia Law School in 1958 for her final year. During her studies, she made both the Harvard and Columbia Law Review. Ginsburg graduated with her law degree from Columbia in 1959 at the top of her class. However, even with all of her academic accomplishments, it was hard for her to find employment after graduation. She explained, “In the fifties, the traditional law firms were just beginning to turn around on hiring Jews. … But to be a woman, a Jew, and a mother to boot, that combination was a bit much.”[1] Ginsburg was able to land a position as a law clerk for the Honorable Edmund L. Palmieri, Judge of the United States District Court for the Southern District of New York in 1959. She served in that office until 1961.

Following her clerkship, Ginsburg began working as a research associate for the Columbia Law School Project on International Procedure. After a year as a research associate, she became the associate director and continued in that position for a year. In 1963, Ginsburg began as a Professor of Law at Rutgers University School of Law and taught classes until 1972. She also became involved with the American Civil Liberties Union (ACLU) and she was central to the founding of their Women’s Rights Project in 1971. Ginsburg returned to Columbia Law School in 1972, where she became the first woman hired to receive tenure. While teaching at Columbia, she also served as the general counsel for the ACLU from 1973-1980 and on the National Board of Directors from 1974–1980. During that time, she became a fellow at the Center for Advanced Study in the Behavioral Sciences in Stanford, California from 1977-1978.

Ginsburg was appointed to the United States Court of Appeals for the District of Columbia Circuit in 1980 by President Jimmy Carter. She served there for thirteen years, prior to being nominated as an Associate Justice of the Supreme Court by President Bill Clinton in 1993. She accepted his nomination and took her seat as a Supreme Court Justice on August 10, 1993. She became the second woman, and first Jewish woman, to serve on the Supreme Court. During her tenure as a justice, Ginsburg has fiercely advocated for gender equality and women’s rights. For example, she wrote the court’s opinion in the United States v. Virginia case, ruling that qualified women could not be denied admission to the Virginia Military Institute. She was also a voice of dissent to the court’s decision in the Ledbetter v. Goodyear Tire & Rubber Co. case, denying a woman’s gender pay discrimination claim. Ginsburg subsequently worked with President Barack Obama in 2009 on the Lilly Ledbetter Fair Pay Act to combat pay disparities. At eighty-seven years old, Ginsburg continued to work for gender equality as a Supreme Court Justice.

Ginsburg died on September 18, 2020 due to complications of metastatic pancreas cancer.