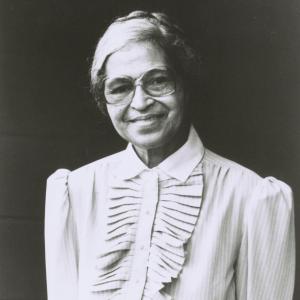 On December 1, 1955, Rosa Parks boarded a bus in Montgomery, Alabama. Instead of going to the back of the bus, which was designated for African Americans, she sat in the front. When the bus started to fill up with white passengers, the bus driver asked Parks to move. She refused. Her resistance set in motion one of the largest social movements in history, the Montgomery Bus Boycott.

Rosa Louise McCauley was born on February 4th, 1913 in Tuskegee, Alabama. As a child, she went to an industrial school for girls and later enrolled at Alabama State Teachers College for Negroes (present-day Alabama State University). Unfortunately, Parks was forced to withdraw after her grandmother became ill. Growing up in the segregated South, Parks was frequently confronted with racial discrimination and violence. She became active in the Civil Rights Movement at a young age.

Parks married a local barber by the name of Raymond Parks when she was 19. He was actively fighting to end racial injustice. Together the couple worked with many social justice organizations. Eventually, Rosa was elected secretary of the Montgomery chapter of the National Association for the Advancement of Colored People (NAACP).

By the time Parks boarded the bus in 1955, she was an established organizer and leader in the Civil Rights Movement in Alabama. Parks not only showed active resistance by refusing to move she also helped organize and plan the Montgomery Bus Boycott. Many have tried to diminish Parks’ role in the boycott by depicting her as a seamstress who simply did not want to move because she was tired. Parks denied the claim and years later revealed her true motivation:

“People always say that I didn’t give up my seat because I was tired, but that isn’t true. I was not tired physically, or no more tired than I usually was at the end of a working day. I was not old, although some people have an image of me as being old then. I was forty-two. No, the only tired I was, was tired of giving in.”

Parks courageous act and the subsequent Montgomery Bus Boycott led to the integration of public transportation in Montgomery. Her actions were not without consequence. She was jailed for refusing to give up her seat and lost her job for participating in the boycott.

After the boycott, Parks and her husband moved to Hampton, Virginia and later permanently settled in Detroit, Michigan. Parks work proved to be invaluable in Detroit’s Civil Rights Movement. She was an active member of several organizations which worked to end inequality in the city. By 1980, after consistently giving to the movement both financially and physically Parks, now widowed, suffered from financial and health troubles. After almost being evicted from her home, local community members and churches came together to support Parks. On October 24th, 2005, at the age of 92, she died of natural causes leaving behind a rich legacy of resistance against racial discrimination and injustice.