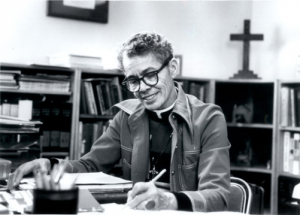 Pauli Murray was breaking barriers from a young age. Held back by what Murray dubbed “Jane Crow,” s/he* was a staunch advocate for the rights of women and people of color and fought tirelessly for civil rights. As a poet, writer, activist, organizer, legal theorist, and priest, Murray was directly involved in, and helped articulate, the intellectual foundations of two of the most important social justice movements of the twentieth century.

Anne Pauline Murray was born on November 20, 1910 in Baltimore Maryland, the fourth of six children born to Agnes Fitzgerald and William Murray. When Murray was three, her mother died from a massive cerebral hemorrhage. Murray’s father—a graduate of Howard University and a teacher and later principal in the Baltimore public school system—was left to raise six children on his own. Dealing with his own grief, William sent Murray to live with a maternal aunt, Pauline Fitzgerald, and grandparents in Durham, North Carolina. Three years later, an impoverished and still grieving William was committed to the Crownsville State Hospital for the Negro Insane. In 1922, William was beaten and killed by a white guard in the basement of the hospital. Murray, now an orphan, thought this status was “the most significant fact of my childhood.”

Murray was a fantastic and energetic student. By the age of five, s/he had taught themself to read. Later, Murray was the editor-in-chief of the school newspaper, the president of the literary society, class secretary, a member of the debate club, a top student, and the forward on the basketball team. Graduating high school at 15, Murray was qualified to attend any top university. Murray refused to apply to the North Carolina College for Negroes because s/he refused to be further confined by segregation. Murray set their sights on Columbia University, but the school did not admit women. Murray instead matriculated to Hunter College—an all-women’s school at the time—in New York City.

While at Hunter, Murray worked various jobs to finance their education. Murray moved into the Harlem YWCA. While in Harlem, Murray became friends with Langston Hughes, met W.E.B. DuBois, heard Mary McLeod Bethune speak, and saw Duke Ellington and Cab Calloway perform at the Apollo Theatre. Murray graduated Hunter in 1933 with a B.A. in English Literature and faced a terrible job market. The stock market crash in 1929 and subsequent Great Depression made finding a job incredibly difficult. For the next five years, Murray worked various jobs and found themself in and out of poverty. Murray also began writing poetry, getting published in various magazines including The Crisis, a publication of the NAACP.

The 1930s were also a time in which Murray began to struggle with their gender identity. Murray changed their birth name from “Anne Pauline” to “Pauli.” Murray also began looking for gender-affirming treatments, including hormone therapy, but was denied. Murray seems to have mostly internalized this struggle; Murray’s autobiography omits any mention of their sexuality, gender orientation, and quest for medical treatment.

In 1938, Murray moved back to North Carolina. Murray applied to the graduate program in sociology at UNC-Chapel Hill, but was denied entry due to race. Murray thought s/he had a perfect right to attend due to family connections—two of Murray’s white, slave-owning ancestors had attended UNC and another served on the Board of Trustees. This would not be the only time Murray pushed back on Jim Crow laws. In 1940, Murray and a friend were arrested and sent to jail for refusing to move to the back of the bus during an interstate trip from New York to North Carolina.

Back in New York, Murray began fundraising for the Workers Defense League. Working on behalf of an imprisoned sharecropper, Murray wrote a letter to President Roosevelt accusing him of caring more about Fascism abroad than racism at home. While FDR did not respond to the letter, his wife Eleanor Roosevelt did, and the two struck up a friendship. As part of the effort, Murray also gave a speech in Richmond that was heard by both Thurgood Marshall and Howard Law Professor Leon Ransom. Ransom approached Murray after the speech and encouraged them to apply, to Howard Law School promising a scholarship if they got in. Murray did and enrolled with the single-minded intention of destroying Jim Crow.

While at Howard, Murray thrived. In a 1944 paper s/he wrote, Murray proposed challenging the “separate” part of the Plessy vs. Ferguson (1896) Supreme Court decision as a violation of the 13th and 14th Amendments; this argument eventually formed the basis for the Brown vs. Board of Education (1954) case. The professor for whom Murray wrote the paper was on the team arguing segregation in education was a constitutional violation. While at Howard, Murray also organized sit-ins in Washington D.C. to desegregate restaurants and urged classmates to go south to fight for civil rights.

After graduating with a J.D from Howard, Murray applied to Harvard University to do a post-graduate fellowship. Murray was denied due to their sex (Harvard did not admit women) and went to UC-Berkeley School of Law instead. This was the type of “Jane Crow” discrimination—discrimination based on gender and on race—Murray had to face their entire life. After graduating from Berkeley, Murray returned to NYC and scraped by on low-paying odd jobs.

In 1948, the women’s division of the Methodist Church asked Murray to write up an explanation of segregation laws in the U.S. The Methodist Church was against segregation and wanted to see if its parishes could disregard local segregation laws. In response, Murray produced a 746-page book, States’ Laws on Race and Color, that exposed the extent and absurdity of segregation. The ACLU began distributing copies of the book to law libraries, HBCUs, and human-rights organizations. Thurgood Marshall kept stacks of it around the NAACP office and referred to Murry’s work as “the bible” of Brown vs. Board of Education.

Murray was not done. In 1956, Murray was hired by a prestigious law firm in NYC. Feeling out of place as the only African American and one of three female-identified lawyers, Murray soon left. (A fourth woman, Ruth Bader Ginsberg, briefly joined as a summer associate and crossed paths with Murray; R.B.G. would later use a law-review article co-written by Murray to argue the Equal Protection Clause applied to women). After a brief term working at the recently opened Ghana School of Law, Murray returned to the United States and dove in head first to the Civil Rights Movement. Murray worked closely with Movement leaders, but frequently criticized them for the way they sidelined women in the movement. In 1965, Murray became the first African American individual to receive a JSD from Yale Law School.

In 1966, Murray was one of the twelve founders of the National Organization for Women (NOW). But after feeling NOW sidelined women of color, Murray left the organization and joined the Equal Employment Opportunity Commission (EEOC). In 1968, Murray received a tenure-track job teaching American Studies at Brandeis University, but left in 1973 to break one more barrier. In 1977, Murray became the first African American woman in the United States to become an Episcopal priest. Murray administered their first Eucharist at the Chapel of the Cross on Franklin Street in Chapel Hill; the church is steps away from UNC’s campus—a school that had denied Murray entry based on their race. The church was also where Murray’s grandmother was baptized.

Pauli Murray died of cancer in Pittsburgh on July 1, 1985. Murray’s autobiography, Song in a Weary Throat: An American Pilgrimage, was published posthumously in 1987. Beyond the autobiography, Murray wrote two other books: a book of poetry, Dark Testament and other poems, and Proud Shoes: The Story of an American Family (1956). The Episcopal Church sainted Murray in 2012, Yale University named a residential college after Murray, and Murray’s childhood home in Durham was designated a National Historic Landmark. Due to Murray’s dogged work and courage, s/he is regarded as one of the most important social justice advocates of the twentieth century.

*The NWHM follows the guidance from the Pauli Murray Center, which uses both s/he and they/them pronouns when discussing Murray’s life. See the Center’s full explanation at: https://www.paulimurraycenter.com/pronouns-pauli-murray

“Who is Pauli Murray?,” The Pauli Murray Center for History and Social Justice, https://www.paulimurraycenter.com/who-is-pauli

“What About Pauli Murray and Pronouns?,” The Pauli Murray Center for History and Social Justice, https://www.paulimurraycenter.com/pronouns-pauli-murray

Pauli Murray, Song in a Weary Throat: An American Pilgrimage (New York: Harper & Row, 1987). (Reissued in 2018 with a new introduction by Liveright Publishing, a division of W.W. Norton & Company)