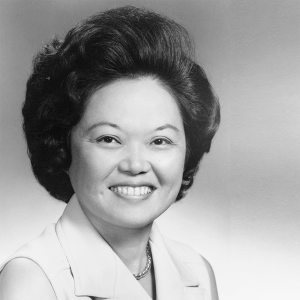 In 1959 when Hawaii became a U.S. State, Patsy Mink knew she wanted to run for a position in government. Little did she know, she would become the first woman of color elected to the U.S. House of Representatives and the first Asian-American woman to serve in Congress. In addition to writing bills like Title IX, the Early Childhood Education Act, and the Women's Educational Equity Act, Mink was the first Asian-American to run for U.S. President.

Patsy Matsu Takemoto was born on December 6, 1927 in Paia, Hawaii. One of two children, her father, Suematsu Takemoto was a civil engineer. When she was a junior at Maui High School, she won her first election as class president. She graduated in 1944 as the valedictorian. After graduation, she went on to attend Wilson College in Pennsylvania and the University of Nebraska but transferred after facing racial discrimination. All students of color were not allowed to live in the same dorms as white students. In addition, Mink was diagnosed with a thyroid condition that needed surgery. She decided to move to Honolulu to finish her schooling at the University of Hawaii with hopes of becoming a doctor. At her new school, she became a member of the varsity debate team, and was elected president of the Pre-Medicine Students Club. She graduated in 1948 with majors in zoology and chemistry. She applied to several medical schools after graduating but none of her applications were accepted. Instead, Mink decided to apply to law school and was accepted at the University of Chicago Law School.

While at the University of Chicago, she met John Mink playing the card game bridge at the International House. The two married and remained in Chicago. Patsy graduated from Law School in 1951 but kept her job at the University of Chicago Law School library. The next year, they moved to Hawaii after having their daughter Gwendolyn. Gwendolyn would grow up to be an author and advocate for women’s issues. While in Hawaii, Patsy Mink registered for the bar exam to be able to practice law in the territory. Unfortunately, even after she passed, Mink was unable to find a job because of her interracial marriage. She decided to start her own practice instead and founded the Oahu Young Democrats in 1954. She became the first Japanese-American woman to practice law in her home state of Hawaii. Mink also worked as a private attorney for the House of Representatives in that territory. When Hawaii became a state in 1959, Mink immediately began campaigning to be elected as a congresswoman. Although Mink’s first attempt was unsuccessful, she returned to politics in 1962 when she won a seat in the Hawaii State Senate. She continued to campaign for a seat in the U.S. Congress even after the Democratic party decided to support another candidate.

In 1964, a second position was created in the U.S. House of Representatives. With the help of her husband and several unpaid volunteers, Mink won a seat in the U.S. House of Representatives, making her the first Asian-American woman to serve in Congress. As a congresswoman, Mink fought for gender and racial equality, affordable childcare, bilingual education, and became a supporter of Title IX. She was one of the authors and sponsors of the Title IX law that stated that “No person in the United States shall, on the basis of sex, be excluded from participation in, be denied the benefits of, or be subjected to discrimination under any education program or activity receiving Federal financial assistance.”[1] While she worked in Washington, D.C., she also traveled back to Hawaii every other week to make sure she was connected to the issues and concerns of the Hawaiian people. She successfully served on many committees while in congress including; the Committee on Education and Labor, Committee on Interior and Insular Affairs, and the Budget Committee. Through these committees, she was able to voice the concerns of groups that were discriminated against. In 1974, she was able to pass the Women’s Educational Equity Act to promote gender equality in schools.

Recognized for her work, Mink was asked by the Oregon Democrats to run for United States President with the support of their party. Their focus on the anti-war movement attracted Mink, and she decided to run for president. Unfortunately, she only received 2 percent of the vote. After this, Mink remained active in politics and served as the president of the Americans for Democratic Action. She also served as Assistant Secretary of State for Oceans and International Environmental and Scientific Affairs. In 1990, Mink was reelected to Congress and served six terms in the House of Representatives. During this time she also formed the Congressional Asian Pacific American Caucus. In August of 2002, Mink was hospitalized for pneumonia. A month later, Patsy Mink died in Honolulu, Hawaii. Due to the upcoming election, her name was still on the ballot in November even though she passed away a month before. She won the election by a landslide but was replaced by Ed Case. After her death, the Title IX law was renamed the Patsy T. Mink Equal Opportunity in Education Act.