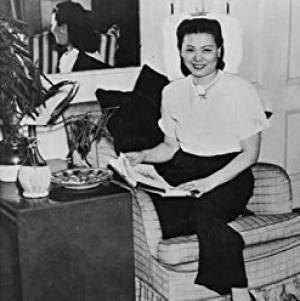 War internee and artist, Miné Okubo is well known for her representations of daily life and humanity. She is most famous for her drawings depicting Japanese and Japanese American internment during World War II.

Born on June 12, 1912, Miné Okubo was Japanese American and grew up in Riverside, California. Her parents were both born in Japan, but came to the United States in 1904 to represent their country at the St. Louis Exposition of Arts and Crafts. Okubo’s father was a scholar and her mother was a calligrapher who graduated with an honors degree from the Tokyo Art Institute. However, in the US, Okubo’s father worked first at a candy shop, and then as a gardener and landscaper. Her mother was a housewife and had little time for her art work. However, her mother encouraged Okubo to pursue her interest in art.

Okubo attended Riverside Junior College in 1931. She gained a scholarship to study art at the University of California Berkeley and graduated with a Bachelor of Arts degree in art in 1935. Okubo continued studying at Berkeley and completed a Master of Arts degree in art and anthropology the following year. While attending university, Okubo held a series of different jobs to earn a living. She worked as a seamstress, maid, farm laborer, and tutor.

Okubo’s excellence in art earned her Berkeley’s distinguished honor, the Bertha Taussig Traveling Art Fellowship. The award was given to her so that she could study, travel, and paint in Europe for a two-year period. She received the award in 1938. During the fellowship, she studied in Paris under artist Fernand Léger. However, in September 1939, war broke out in Europe. Okubo, who was in Switzerland at the time, was stranded. But eventually she was able to obtain a pass through France, which enabled her to board the last ship leaving Bordeaux for the United States. Okubo’s return to America meant that she could not complete the last six months of her fellowship.

After Okubo came back to the United States, she began working with the Works Progress Administration’s Federal Art Project. In this role, Okubo worked on a number of mural projects, including those at the Oakland Hospitality House and Fort Ord. During the period 1940-1941, she also curated two exhibitions at the San Francisco Museum of Modern Art, which showcased the artwork that she produced while studying in Europe.

December 7, 1941, changed the course of MinéOkubo’s life and the lives of the entire Japanese and Japanese American communities living in the United States. President Franklin Delano Roosevelt issued Executive Order 9066 in 1942, which banned people of Japanese descent from living on the West Coast. Okubo and her family were forced to vacate their home and were separated for relocation. Okubo and another brother were sent to the Tanforan relocation center, a former racetrack, in San Bruno, California. They shared a 20’ x 9’ horse stall that smelled of manure, and they were forced to sleep on sacks made of hay. They were later transferred to the Topaz internment camp in Utah.

Despite the difficult living conditions, Okubo continued to pursue her art. In conjunction with Berkeley art professor Chiura Obata and other fellow artists, who were also detained, Okubo helped to found the Tanforan Art School and later the Topaz Art School. At both locations, Okubo taught art lessons to children, adults, and senior citizens. She worked as an illustrator for the Topaz Times. Okubo also helped produce Trek, a literary magazine that was created at Topaz. She drew the covers for the magazine and acted as its art editor.

In 1944, Fortune magazine noticed Okubo’s drawings in Trek and asked her to come to New York City to work as one of their illustrators. She agreed and was able to leave the internment camp to take up residence in New York City. Her first assignment for Fortune was to provide illustration for an article they were writing on Japan.

While Okubo was in the internment camp, she made over 2,000 drawings in charcoal, watercolor, pen, and ink, depicting her everyday experiences. Often these drawings showed her observations of women and children in the camp. After the war ended, she was encouraged to compile her drawings into a book. In 1946, her book, entitled Citizen 13660 was published. It contained 206 drawings from her time in the camps. It was the first published account of the experience from an internee. The title of the book refers to the number assigned to Okubo by the US government during her internment period.

Okubo worked as a freelance and commercial artist until 1951, when she became a full-time painter. She produced a number of illustrations for newspapers and magazines, including Time, Life, and The New York Times. She also provided drawings to accompany children’s books such as Where the Carp Banners Fly by Grace W. McGavran, Ten Against the Storm by Marianna Nugent Prichard, and The Seven Stars by Toru Matsumoto. From 1951 to 1952, Okubo moved to California to work as an art lecturer at UC Berkley, before returning to New York City.

In 1981, the Commission on Wartime Relocation and Internment of Civilians was created to seek an apology and restitution for the injustices carried out against Japanese and Japanese American communities by the US government during the war. Okubo appeared before the committee and testified about her experiences and how her artwork connected with internment. Congress passed the Civil Liberties Act of 1988 to recognize the illegal removal of people of Japanese ancestry from their homes in World War II. Internees were also awarded financial compensation in the amount of $20,000. Okubo used the money to pay off debts.

In 1984, Okubo’s book Citizen 13660 won the American Book Award. In 1991, Okubo’s work was recognized with an award from the National Women’s Caucus of Art. She continued painting until her death in 2001.