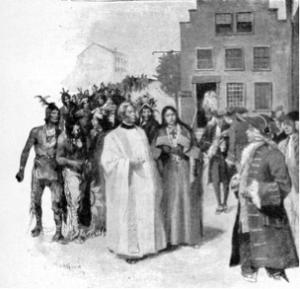 As the daughter of an English trader and a Native American woman, Mary Musgrove was able to understand many cultures. Her mixed heritage and language skills allowed her to become a negotiator between English and Native American communities. She is most commonly known for playing an important role in the development of Colonial Georgia. She is also known for her business knowledge as a trader and interpreter.

Mary Musgrove was born around 1700 in Coweta, Creek Nation. She was given the name Coosaponakeesa at birth by her Native American mother. Her mother was related to many of the prominent leaders in the community. Her brother was the chief of Coweta. Musgrove grew up learning to speak the Creek language of Muskogee and the cultural traditions of Creek Natives. Musgrove also spent much of her childhood in South Carolina. Her father, Edward Griffin, took her and her younger brother to a small town in South Carolina called Pon Pon when she was about seven years old. In Pon Pon, Musgrove learned English and changed her name to Mary. In 1717, Mary got married to an English trader named John Musgrove. They had three children, but all died very young. Mary and John Musgrove set up a trading post near the Savannah River shortly after they were married where Mary served as a skilled interpreter. Her business caught the attention of General James Oglethorpe, one of Georgia’s charter members. General Oglethorpe hired Musgrove as his primary interpreter. She worked for him from 1733 to 1743. Two years into her work with General Oglethorpe, Mary’s husband John Musgrove died.

At the time of her husband’s death, John Musgrove owned their land in South Carolina. He also owned 500 acres in Georgia that included their trading post, house, and cow pen on Yamacraw Bluff. Due to Georgia laws, Mary was only permitted to hold the land until her oldest son could take over the land as owner. However, all of her sons died. Historian Michael D. Green concludes that Musgrove married her second husband, Jacob Matthews, in 1737 because she was in danger of losing her property. Matthews was one of her indentured servants and was many years younger than she was. Musgrove was then allowed to keep her property. The new couple started another trading post in Mount Venture on the Altamaha River. Musgrove continued to work as an interpreter for General Oglethorpe. She helped maintain peaceful and fair trade relations between the new Georgia Colony and the Creek Nation. During her time in Yamacraw Bluff, she successfully negotiated relations between the Yamacraw Chief, Tomochichi, and the Savannah settlers. Unfortunately, Musgrove’s second husband Matthews died in 1742.

Two years later, Musgrove married Christian missionary Reverend Thomas Bosomworth. This marriage came with a rise in social class. Musgrove and Reverend Bosomworth opened a second trading post on the Altamaha River in 1746. They continued to serve as cultural mediators. Musgrove and her husband traveled to Native American communities with messages from General Oglethorpe and the English King and they would return with the speeches and concerns of the Native American communities. Sometimes, they taught Christian missionaries the Muskogee language to help with their interactions. However, Musgrove and Reverend Bosomworth faced a problem when the Lower Creek Chief Malatchi gave them three islands. These three islands, Ossabaw, Sapelo, and St. Catherines, were known as the “Sea Islands" that belonged to the Creeks. British officials refused to honor Musgrove’s claim to the land. They stated that a nation can only grant land to another nation, not to an individual. Musgrove fought this decision. In 1749, over 200 Creek people went with her to Savanah to petition Georgia officials. When they refused her claim, she went to England to plead her case before the Board of Trade. The Board referred her case back to the Georgia courts. When she arrived back home, Georgia had taken control of her land. Decades later, royal governor Henry Ellis compromised. He granted Musgrove St. Catherines Island and £2,100, when she released her claims to the other two islands. Musgrove continued to serve as a mediator between Georgia and Creek nation until her death on St. Catherines Island around 1763.