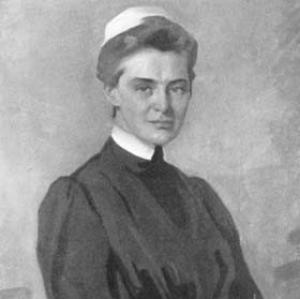 Born in Canada, Mary Adelaide Nutting had a profound impact on American nursing. She was one of the key figures in modernizing the profession and her work is still influential in the field today.

Mary Adelaide Nutting was born to parents Vespasian and Harriet Sophia Peasley Nutting on November 1, 1858 in Quebec, Canada. All of her formative years were spent in and around Quebec and Montreal. Although she became nationally recognized for nursing in the United States, Nutting was not initially drawn to medicine. She was interested in the arts and music and attended schools in Canada and the United States in order to foster her studies in these subjects. Once Nutting completed her education, she taught music at the Cathedral School for Girls in Newfoundland.

In the late 1800s, training to be a nurse was relatively new. Florence Nightingale was among the most prominent nurses at the time, who advocated for further advancements in nursing education and experience. Johns Hopkins University, located in Baltimore, Maryland, was the first higher educational institution in the United States to put Nightingales’s advice into practice. It opened its first nursing program at the John Hopkins Hospital Training School in 1889. Nutting decided to enroll in the first class of the new training program. Nutting started the program at the age of 31 years old. She along with 17 other students pursued the degree of nursing at the university.

At the end of the two-year program, Nutting graduated from Johns Hopkins University and was offered a position as head nurse. Nutting accepted the position and remained at the school. Proving herself to be an able nurse and efficient administrator, Nutting quickly moved up the ranks within the university’s Hospital Training School. In 1892, she was appointed to assistant superintendent of nurses. Nutting was then promoted to superintendent of nurses. Finally, she became principle of the training school. In each of these positions, Nutting developed the nursing program, creating positive and more formalized standards for nursing education at the school. She extended the training program from two to three years, persuaded the school to offer scholarships to promising students, and restructured the curriculum to include field experience as part of the process.

In addition to Nutting’s many accomplishments at Johns Hopkins University, she also made significant contributions to the profession of nursing nationwide. Seeking to disseminate information about nursing practices and the nursing profession more generally, she helped found the American Journal of Nursing in 1900. Nutting also headed a number of organizations dedicated to advocating for and working with nurses at all levels and in all areas of the field. In 1903, she took on the role of first president of the newly created State Association of Graduate Nurses in Maryland. In the following year, Nutting worked with others in the profession to draft the first nurse practice law in Maryland. In that same year, she also became the first registered nurse in the state.

Nutting was also influential in helping Columbia University, located in New York City, establishing its own nursing program. As a result, the university offered Nutting the newly created professorship in nursing. This was the first university in the US to create such a position in the field of nursing. Nutting accepted the position, making her the first woman in America to hold such a post. While at Columbia University, she revolutionized their program. One of her many innovations was the creation of a graduate program for advanced training in the field of nursing. In 1910, the university created the Department of Nursing and Health and Nutting was named head of it.

With the advent of World War I and America’s entry into the war in 1917, Nutting had several influential roles. She served as the chairman of the Committee of Nursing of the General Medical Board of the Council of National Defense, which coordinated nursing resources during the conflict. She also helped to promote the field of nursing and recruit women to this form of war work. For her wartime efforts, she was awarded the Liberty Service Medal from the National Institute of Social Sciences.

She continued her career at Columbia University after the war until she retired in 1925. After retiring, Nutting remained active in the profession, helping to champion nursing. An important part of her work was to recommend to Congress the employment of graduate educated nurses in the US Army’s hospital service. Congress approved such work in 1936.

Nutting’s extensive work in nursing and her many contributions to the field garnered her several awards and honors. She was given an honorary Master of Arts Degree from Yale University in 1922. Nutting was also made honorary president of the Florence Nightingale International Foundation in 1934. For her lifetime of work, the National League of Nursing Education created the Mary Adelaide Nutting Medal in 1944 and Nutting was its first recipient.

Nutting died in October 1948. But her work continues to have a lasting impact on the nursing profession. She received several awards posthumously. She was inducted into the American Nurses’ Association Hall of Fame in 1976 and became an honoree of the Maryland Women’s Hall of Fame in 1994. She authored or coauthored several books on nursing practices, which are still read by students today. These books include: History of Nursing and A Sound Economic Basis for Nursing.