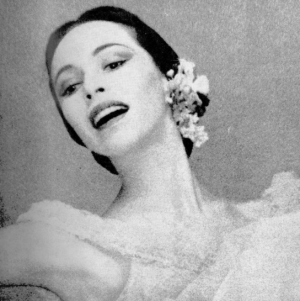 At the age of 17, Maria Tallchief moved to New York City to pursue her dreams of becoming a dancer. She went from dance company to dance company looking for work. Many of the companies discriminated against her because of her Native American ancestry. Rejection did not stop Tallchief; she continued working towards her goal and eventually became one of America’s most popular ballerinas.

Elizabeth Marie Tall Chief was born January 24, 1925 in Fairfax, Oklahoma. Her father was a member of the Osage Nation. Her mother, Ruth Porter, had grown up very poor and was never able to take dancing lessons. Therefore, when Tallchief and her sister Marjorie showed interest in dance her mother immediately placed them in lessons. Tallchief excelled at dance and music. During her teen years, Tallchief’s family moved to Los Angeles, California in hopes of securing a significant role. Unfortunately, major opportunities were slow coming. In the meantime, Tallchief explored different genres of dance and was drawn to ballet.

Upon graduating from high school, Tallchief moved to New York City to pursue ballet full time. She was selected as an understudy in the Ballet Russe, the premier Russian ballerina company in the United States. In 1942, when one of the lead ballerinas abruptly stepped down, Tallchief was called to stand in. Her performance received positive reviews from top critics. As her career began to take off, many tried to persuade Tallchief to change her last name so that dance companies would not discriminate against her. She refused and continued to perform as Maria Tallchief. In 1947, she became the first American to dance with the Paris Opera Ballet. After marrying choreographer George Balanchine, who created her signature Firebird role, she became prima ballerina of the New City Ballet. One of Tallchief’s best-known roles was as the Sugar Plum Fairy in The Nutcracker. Tallchief perform at the Bolshoi Theater in Moscow in 1960, making her the first American to do so.

After retiring from dancing, Tallchief and her sister opened the Chicago City Ballet, a ballet school and dance company. Never forgetting her Native American ancestry, she spoke out against injustices and discrimination. As prima ballerina, Tallchief not only broke barriers for Native Americans, she also became one of the only Americans recognized in European ballet companies. Tallchief died on April 11, 2013.