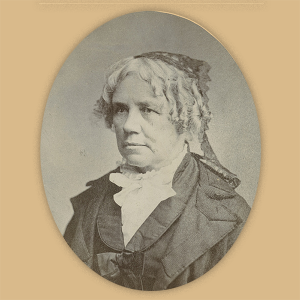 Born on August 1, 1818 in Nantucket, Massachusetts, Maria was the third of William and Lydia Mitchell’s ten children. As Quakers, her parents advocated equal education for girls, and her father—an astronomer and teacher—contributed much to her education. Maria attended Cyrus Peirce’s School for Young Ladies, and after completing her education at age 16, opened a school training girls in math and science.

In 1836, Mitchell went to work as the librarian of the Nantucket Atheneum, where for twenty years, she spent her days reading and nights with her father at the observatory he built atop the nearby Pacific Bank, where he was the principal officer.

On October 1, 1847, at age 29, Maria Mitchell discovered the comet that would be named "Miss Mitchell's Comet," using a two-inch telescope. She was awarded a gold medal from King Frederick VI of Denmark and became the first woman elected to the American Academy of Arts and Sciences in 1848.

Later elected to the American Association for the Advancement of Science and the American Philosophical Society, Mitchell was likely one of the first professional women employed by the US government, hired to make calculations for a project conducted by the US Coastal Survey.

After leaving the Atheneum in 1856, Mitchell traveled throughout Europe, meeting with astronomers. Over the years, she became involved in the anti-slavery movement and suffrage movements. After the Civil War, Vassar College founder Matthew Vassar recruited Mitchell to join the faculty, where she had access to a twelve-inch telescope, the third largest in the United States, and began to specialize in the surfaces of Jupiter and Saturn. She defied social conventions by having her female students come out at night for class work and celestial observations, and she brought noted feminists to her observatory to speak on political issues, among them Julia Ward Howe. Mitchell's research and that of her students was frequently published in academic journals that traditionally only featured men. Three of her female protégés were later included in the first list of Academic Men of Science in 1906.

Mitchell also was a leader in the formation of the American Association for the Advancement of Women (AAW), which later became the American Association of University Women. She served as AAW’s 1873 president and also was elected vice president of one of the few mixed-gender professional associations of the era, the pioneer American Social Science Association. She gave an important speech during the nation’s centennial year in 1876 entitled “The Need for Women in Science.”

Retiring from Vassar in 1888, Mitchell continued her research in Lynn, Massachusetts, where her sister lived. Friends and supporters founded the Maria Mitchell Association on Nantucket in 1902; they preserved her home, which is open to visitors. Mitchell was one of three women elected to the Hall of Fame of Great Americans in 1905, and was an inductee into the National Women's Hall of Fame in Seneca Falls, New York. Later astronomers honored her by naming lunar crater on the moon for Maria Mitchell.