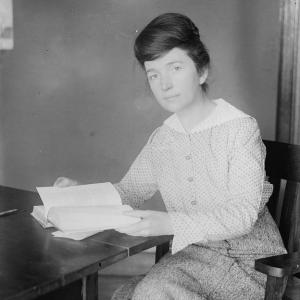 In the early 20th century, at a time when matters surrounding family planning or women’s healthcare were not spoken in public, Margaret Sanger founded the birth control movement and became an outspoken and life-long advocate for women’s reproductive rights. In her later life, Sanger spearheaded the effort that resulted in the modern birth control pill by 1960.

Born September 14, 1879, in Corning, New York, the sixth of eleven children born to Michael Hennessey Higgins, a stonemason, and Anna Purcell Higgins, a devoutly Roman Catholic Irishwoman. Sanger’s life course was shaped by the poverty of her childhood and the death of her mother at age 50, which Sanger understood resulted from the physical toll of eleven pregnancies. Sanger later became a nurse, attending Claverack College and Hudson River Institute in 1896 and completing the nursing program at White Plains Hospital in 1902. That year she married William Sanger, an architect, and moved to Hastings, New York, where the couple had three children.

The Sangers moved to New York City in 1910, where they became involved with various Progressive Era activists and intellectuals, including Max Eastman, Upton Sinclair, and Emma Goldman. Sanger became a member of the Women’s Committee of the New York chapter of the Socialist Party, and participated in women’s labor protests, such as strikes in Lawrence, Massachusetts in 1912 and Paterson, New Jersey in 1913.

Sanger strongly believed that the ability to control family size was crucial to ending the cycle of women’s poverty. But it was illegal to distribute birth control information. Working as a visiting nurse, she frequented the homes of poor immigrants, often with large families and wives whose health was impaired by too many pregnancies, miscarriages, or in desperation botched abortions. Often, too, immigrant wives would ask her to tell them “the secret,” presuming that educated white women like Sanger knew how to limit family size. Sanger made it her mission to 1) provide women with birth control information and 2) repeal the federal Comstock Law, which prohibited the distribution of obscene materials through the mails, and regarded birth control information as such.

In 1914, Sanger launched her own feminist publication, The Woman Rebel, advocating for birth control. She was charged with violating the Comstock laws and fled to England, though had friends share a pamphlet she authored on contraceptive techniques in her absence. She returned a year later to stand trial, but when her five-year-old daughter died unexpectedly, public pressure led to the charges against Sanger being dropped.

In 1916, she opened the first birth control clinic in Brownsville, Brooklyn. Barely a week later, she was arrested and spent 30 days in jail. Sanger’s arrest garnered much media attention and brought her several affluent supporters. She appealed her conviction, and although she lost, the courts ruled that physicians could prescribe contraceptives to women for medical reasons, a loophole that allowed Sanger to open a clinic in 1923 staffed by female doctors and social workers, which would later become the Planned Parenthood Federation of America.

Sanger and her husband divorced in 1914; she remarried James Noah Slow, an oil tycoon, in 1922, while continuing her advocacy work. Sanger launched the Birth Control Review in 1917 and founded the American Birth Control League in 1921 to gain support from social workers, medical professionals, and the public for birth control. In 1929, she formed the National Committee on Federal Legislation for Birth Control to lobby Congress for legislation that would permit doctors to prescribe birth control. Despite resistance from doctors and the Catholic Church throughout her activist career, over time, Sanger’s efforts led to the legalization and wide-spread usage of contraceptives in the United States. In 1936, the courts made it legal for doctors to prescribe birth control. In 1971 the Comstock laws finally ended, nearly a century after their passage.

In the 1920s and 1930s, Sanger expanded her efforts internationally. Sanger retired in 1942 and moved to Tucson, Arizona, though she remained a passionate advocate for birth control. In the late 1950s, with funding from International Harvester heiress Katharine McCormick, Sanger recruited researcher Gregory Pincus to develop an oral contraceptive. The “pill” was approved by the Food and Drug Administration in 1960. Sanger died in 1966 at the age of 86.