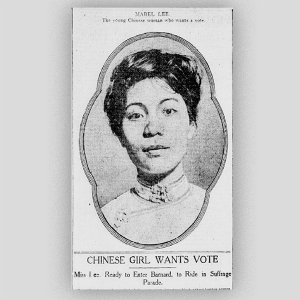 In a 1912 New York Times article, Mabel Ping-Hua Lee was regarded as “the symbol of the new era, when all women will be free and unhampered.”[1] At the time, sixteen year old Lee was already a recognized suffragist and activist that would help to lead almost 10,000 people in the New York suffrage parade. Lee went on to become the first Chinese woman to get a PhD in economics.

Mabel Ping-Hua Lee was born on October 7, 1897 in Guangzhou (Canton City), China. Her father, Dr. Lee Towe, was a missionary pastor and he moved to the United States when she was four years old. Lee stayed in China with her mother and grandmother, and she studied Chinese  from private tutors. When Lee was nine years old, she won an academic scholarship called the Boxer Indemnity Scholarship that allowed her to relocate to the United States to attend school. The Lee family moved in 1905 to Chinatown in New York City, and Mabel Lee attended Erasmus Hall Academy in Brooklyn, New York. Lee became involved in activism and women’s rights very early on. By the time she was sixteen years old, Lee helped to lead a suffrage parade on horseback in New York City. Held on May 4, 1912, the parade started in New York’s historic Greenwich Village and was attended by almost ten thousand people.

Prior to the parade, the New York Tribune and New York Times wrote articles featuring Lee’s teenage activism and her involvement in the movement. Ironically, the 1882 Chinese Exclusion Act prevented Chinese immigrants from attaining citizenship and voting. Even when the 19th amendment was passed, Chinese women and many other women of color still did not have the ability to vote. However, Lee still strongly advocated for suffrage for women. In addition to her activism for women’s rights, Lee was also a brilliant student. While in school, she excelled in English, Latin, and mathematics. At sixteen years old she was admitted to Barnard College, the women’s college connected to the all-male Columbia University. Lee majored in history and philosophy and joined the Chinese Students’ Association. She continued her activism by writing feminist essays for The Chinese Students’ Monthly. She wrote an essay in 1914 entitled “The Meaning of Woman Suffrage,” that emphasized the importance of extending voting rights and equal opportunities to women. Two years later, Lee gave a speech at the Women’s Political Union’s Suffrage Shop entitled “The Submerged Half.” In this speech, Lee encouraged the education and civic participation of Chinese women of all ages.

By 1917, women in the state of New York were granted the right to vote. Three years later, the 19th Amendment was passed that gave women the right to vote across the country. However, Lee and many other women of color still could not vote. It would take another almost twenty-five years for Lee to be granted the right to vote with the repeal of the Chinese Exclusion Act in 1943. However, she continued to advocate for women’s suffrage and equal rights. Lee graduated from Barnard College and went on to receive her master’s degree in educational administration from Columbia Teacher’s College. She decided to continue her studies and attended Columbia University to pursue a PhD in economics. While in graduate school, Lee studied under well-known economic professors including; Edwin R. A. Seligman, Henry R. Seager, Henry L. Moore, Vladimir G. Simkhovitch, Wesley C. Mitchell, and Robert E. Chaddock. She graduated in 1921 and became the first Chinese woman to graduate with a PhD in economics. That year, Lee published her PhD research as a book entitled The Economic History of China. Unfortunately, Lee’s father passed away in 1924, a few years after her graduation.

After her father’s death, Lee took over his role as director of the First Chinese Baptist Church of New York City. She also opened a community center called the Chinese Christian Center. This center was designed to empower the Chinese community by offering a health clinic, a kindergarten, vocational training, and English classes. Mabel Ping-Hua Lee died in 1966 at the age of 70. It is unknown if Lee ever attained United States citizenship and exercised her right to vote, but her activism ensured many other women had the ability to do so.