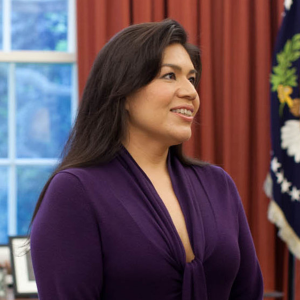 Over 200 years ago, the United States signed a treaty with the Cherokee Nation, granting them representation in Congress. However, this position was never filled until Kimberly Teehee entered the scene. In 2019, Teehee became the first Cherokee Nation delegate in the House of Representatives. As a lawyer, activist, and former advisor to President Obama, Teehee has quickly become a monumental figure in history.

Kimberly Teehee was born on March 2, 1966 in Chicago, Illinois. Due to a federal program under the Indian Relocation Act of 1956, Teehee’s parents were moved to Chicago. Although Teehee was born in this city, she grew up in Claremore, Oklahoma. She became a member of the Cherokee Nation and was highly involved in Cherokee Nation affairs. Teehee went on to attend Northeastern State University in Tahlequah, Oklahoma for her Bachelor of Arts in Political Science. Following this, she earned her law degree (Juris Doctor) from the University of Iowa, College of Law. During her time in law school, Teehee served in leadership positions with the National Native American Law Student Association and the Iowa Native American Law Student Association. Recognized for her work, she received the Bureau of National Affairs Award as a student.

In the early 1980s, Teehee began working actively in politics. She started her career as an intern for former chief Wilma Mankiller. Mankiller was the first and only woman to become chief of the Cherokee Nation, who often mentored young people within the nation. Teehee was influenced early on by Mankiller’s strength, leadership, and her influential friends. One of Mankiller’s best friends, Gloria Steinem, also welcomed Teehee. She said that both of those women “planted seeds firmly in me that I pay forward today to teenagers in rural communities.”[1] Teehee also recalls that Mankiller told her to make a decision that would change her life. “It was Wilma who told me to go to Washington, D.C. to go get greater experience and that I could always bring that back to the Cherokee Nation.”[2] Once in Washington, Teehee became a vocal leader and advocate for Native American rights. She held important positions on the Democratic National Committee and the Presidential Inaugural Committee for President Bill Clinton’s second Inauguration as the Deputy Director of Native American Outreach.

In January of 1998, Teehee became the Senior Advisor to Congressman Dale Kildee of Michigan. Congressman Kildee was the co-chair of the House of Representatives’ Native American Caucus. She served this Caucus for over a decade as a staffer on Capitol Hill. Through her involvement, the Caucus was able to make meaningful progress on a variety of laws affecting Native American issues including education, housing, and health care. By early 2009, President Barack Obama recognized Teehee, and selected her to serve on the White House Domestic Policy Council as the first-ever Senior Policy Advisor for Native American Affairs. In this position, Teehee served to strengthen the relationship between the United States and tribal nations. For three years, she collaborated with various federal agencies to create policies that helped address concerns within Native American communities. Teehee’s work led to an Executive Order from the President to improve Tribal Universities, as well as American Indian and Alaska Native Education. In addition, President Obama issued a Presidential Memorandum on tribal consultation as a result of her work. During Teehee’s time in the White House, she was able to guide the President’s support for the United Nations Declaration on the Rights of Indigenous Peoples. She also pushed for the support of legislation that would hold people accountable when they committed crimes of domestic violence against Native American Women. This was known as the Violence Against Women Act (VAWA).

Teehee continued to make an impact in the White House by leading a government-wide team to monitor the progress of tribal policy and legislation, while organizing three White House Tribal Nations Conferences. In 2012, she began working as a Partner for a federal advocacy group called Mapetsi Policy Group. This organization represented the concerns of Native American tribes and tribal organizations. Two years later, Teehee became the Vice President of Government Relations for Cherokee Nation Businesses, and the Director of Government Relations for the Cherokee Nation. Due to her extensive experience, Teehee was the perfect person to fulfil the historic role as the first Cherokee delegate in the House of Representatives. Appointed in September of 2019, Teehee’s position was the result of a treaty signed between the United States and the Cherokee Nation over 200 years ago. This treaty promised the Cherokee Nation representation in Congress. Kimberly Teehee is the first person to fulfill this role.