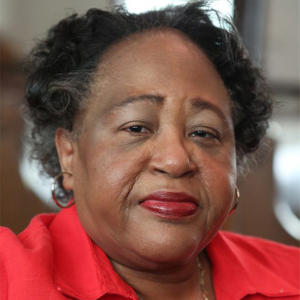 On March 7, 1965, Joyce Parrish O’Neal stood on the steps of her church, the Brown Chapel African Methodist Episcopal (AME) Church, and watched the violence unfolding along the Edmund Pettus Bridge in Selma, Alabama. While O’Neal was not on the bridge that day, she had participated in many marchers supporting African Americans’ right to vote during the Civil Rights Movement.

Joyce Parrish O’Neal was born in Selma, Alabama in 1948 to Felix Parnell Parrish and Lula Sharpe Parrish. Both of her parents were teachers. Her father was originally from Ohio and had been one of few African American students at his integrated high school. Her mother grew up in Dallas County (where Selma is located) in the segregated South. The two sides of her family had two different histories, and that informed O’Neal’s upbringing and expectations.

Selma, Alabama was a deeply segregated city. O’Neal remembers her grandmother telling her to keep her hands to herself when they went downtown; if she was caught touching anything she might be accused of stealing. She also recalled a specific downtown store that sold hamburgers, but African Americans had to get them at a little window at the back. She never went because her mother made hamburgers for her and her sister at home. O’Neal recalled “before [her mother] would subject her daughters to that kind of treatment, she would make hamburgers whatever day we wanted them.” O’Neal also went to a segregated high school, even though the Supreme Court had ruled school segregation unconstitutional in Brown v. Board of Education (1954). Despite this, O’Neal had happy memories of growing up in Selma because her African American community had theaters, doctors, stores, and restaurants that she and her family could go to. She thought she had everything in her community and did not experience want.

In 1965, O’Neal was a junior in high school. The federal government had just passed the Voting Rights Act (1965), which was meant to enforce African Americans’ right to vote. Despite the Federal act, many African Americans were still turned away from the polls and voter registration desks by local officials. O’Neal’s mother was one of them. Every time she went to register to vote, her application was stamped “denied.” O’Neal would sometimes accompany her mother when she tried to register, and because of witnessing her mother’s problems, she and the family were “all for the movement” for voting rights.

O’Neal never missed a mass meeting at either her church, Brown Chapel AME, or First Baptist, where the Student Non-Violent Coordinating Committee (SNCC) was headquartered. At First Baptist, O’Neal learned how to march, what to do if attacked, and about non-violence. She would then go to Brown Chapel AME with her sisters, friends, and other children to march to the court house with signs that said “let my parents vote.” O’Neal remembers frequently sneaking out of school to join marches. She said it “was practically an everyday occurrence” to walk to the courthouse and there was fear because marchers were frequently arrested or beaten back. O’Neal recalled, “you never knew when you were marching on a given day whether you would be arrested or whether you would be hit with a Billy club.” Fortunately, O’Neal was never arrested or beaten, but she knew many people who were. Both her sister and her best friend were arrested for marching.

On March 7, 1965, O’Neal witnessed Bloody Sunday. As hundreds of peaceful marchers tried to cross the Edmund Pettus Bridge during their march from Selma to Montgomery in support of the vote, the police and deputized white residents attacked. O’Neal remembers, “we saw people being beaten back from the bridge by riders on horseback...They were actually chasing them down and beating them. The horses rode up the steps of the church as they beat people. Some people were so full of tear gas, they were in the streets trying to get out of their clothing. That tear gas had saturated their hair, clothes, skin...Some of the people who had run back from the bridge had gashes in their head. The blood was running down their faces.” The scenes of Bloody Sunday caused a national outcry and forced further enforcement of the Voting Rights Act, and when it was time for O’Neal to register at 18 in 1966, both she and her mother were able to go to the courthouse and register without hassle. When she first voted, O’Neal had a profound sense of pride and a “great feeling” about everything that she and others had done to make her registration possible.

After high school, O’Neal went to Stillman College, an HBCU in Tuscaloosa. She received a B.S. in 1970. After working in Hartford, CT for two years, she moved back to Selma and worked as a social worker from 1974-1977. In 1993, she received an M.A. in Social Work from the University of Alabama. Beyond her work as a social worker, she also held a number of government jobs in and around Alabama including: Food Stamp Advisor (1982-1993), County Department of Human Resources Supervisor (1993-2003), and State Food Stamp Director for the State of Alabama (2003-2008). She retired in 2009 as a District Specialist.

O’Neal has received many honors in her life, including inclusion in the Alabama Social Work Hall of Fame (2017). She was also the first African American elected to the Alabama State Personnel Board (2006 and 2010). She remains affiliated with the Brown Chapel AME Church. Currently, she serves as the church’s historian. She still lives in Selma and continues to be a voting advocate.