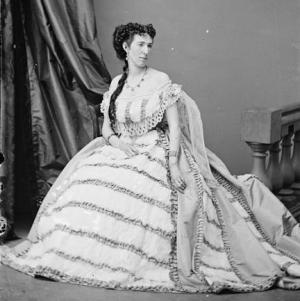 Only 17 years old when the Civil War began, Isabella “Belle” Boyd would become one of the most famous female Confederate spies, hailed by some as the “Cleopatra of Secession.” Her colorful postwar life also included several marriages and stints as an actress and author.

Born on May 9, 1844 in Martinsburg, Virginia, Boyd was the oldest child of affluent shopkeeper and tobacco farmer Benjamin Reed Boyd and Mary Rebecca Glenn Boyd. A spirited child, Boyd attended the Mount Washington Female College of Baltimore at age 12. After graduating at 16, she returned to Martinsburg, which fell to the Union the next year, on July 3, 1861. Boyd initially helped raise funds and sew clothing for the Confederate soldiers and was proud of her forty-five year-old father’s decision to enlist in General Thomas “Stonewall” Jackson’s troops. When a Union soldier invaded Boyd’s home and assaulted her mother, Boyd fatally shot him, which won her favor in the South. Acquitted of the crime, Boyd returned to Martinsburg and began her espionage career.

Daring in a way that scorned the era’s standards for ladies, Boyd took advantage of the common assumption that a woman could not be dangerous. She also defied women’s conventional roles by becoming a messenger for Confederate Generals Jackson and Pierre Beauregard. Unafraid to use her feminine wiles to gain access to Union soldiers and information, Boyd became more daring with each attempt to garner Union secrets and war plans. Union soldiers initially did not expect a girl to be an intelligence agent so even when her messages were intercepted, federal officers simply reprimanded what they assumed was an innocent teenager.

Eventually, however, Boyd became known to Union officials. She was arrested six times, imprisoned three times, and exiled twice. Among her more famous exploits, on May 23, 1862 in Front Royal, Virginia, she listened through a knothole in her hotel room wall to several Union officers next door making plans. Then, she rode between the two armies to deliver a message to a staff officer. Her efforts helped secure a Confederate victory, for which, her memoirs claimed, she received a thank you note from Jackson.

On July 29, 1862, Secretary of War Edwin Stanton issued a warrant for her arrest. She was taken to Old Capitol Prison—now the site of the US Supreme Court—and later banished to the Confederate capitol of Richmond. She was arrested again before being exiled to Canada, but she instead headed for England. Likely more an adventurer than a true Confederate ideologue, Boyd married two Union men—first in 1864, Samuel Hardinge, a Union naval officer with whom she had a daughter, Grace, though he exited her life just before Grace’s birth.

To support herself, Boyd published her memoir, Belle Boyd, in Camp and Prison (1865), which exaggerated her exploits but sold well. She also became an actress, but gave it up in 1869, after marrying John Swainston Hammond, another former Union officer. They had four children (three that lived past infancy), but divorced in 1884. Months later, she married actor Nathaniel High, 17 years her junior. She returned to acting in 1886 to reenact her Civil War life. She died on stage in Wisconsin, on June 11, 1900 at age 56. Her childhood home is now a museum.