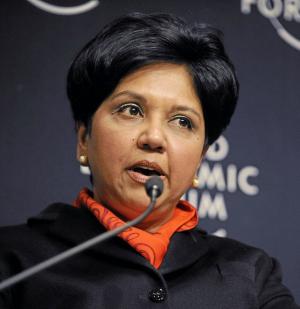 Indra Nooyi, a business leader and strategic thinker, is widely considered to be one of the top CEOs in the world for her leadership of the global behemoth PepsiCo for 12 years. She was the first woman of color and first immigrant to head a Fortune 50 company. Under her leadership, the company increased its profitability while also working to improve environmental sustainability and the healthiness of its food offerings. Nooyi is also a major philanthropist. Her donation to her alma mater Yale School of Management makes her the school’s largest alumni donor and the first woman to have endowed a Chair at a top business school.

Indra Krisnamurthy was born in Madras (now called Chennai), India, on October 28, 1955. She grew up in a close family with two siblings, her parents, and her grandparents. Her father was a bank official, and her mother was a house wife. Nooyi’s family was middle class and, like most of their neighbors, devout Hindus and relatively conservative. Nooyi remains close to her family. Her mother  has lived with her in the US and features prominently in Nooyi’s stories. Her sister Chandrika is also a successful businesswoman as well as a Grammy-nominated musical artist. A brilliant student in high school, Nooyi  developed interests considered unusual for girls in that time and place. In addition to excelling at her studies in Physics, Chemistry and Mathematics, she competed on a cricket team and played guitar in a female rock band at Madras Christian College, from which she graduated in 1974 at the age of 18. She earned a spot at the prestigious Indian Institute of Management Calcutta, where she received her MBA in 1976.

After graduation, Nooyi began her career as a business strategist. Her first job was at a British textile firm. She then moved to a product manager role at Johnson & Johnson in Mumbai. There she was charged with introducing menstrual pads, Stayfree, to India. This was a challenging task since India banned  direct advertising for such products. Nooyi devised a successful workaround, directly marketing the products to female college students.

She became convinced, however, that she needed a more global business education and applied to Yale School of Management after reading about it in a magazine. Somewhat to her surprise— since “it was unheard of for a good, conservative, south Indian Brahmin girl” to go overseas on her own—her parents supported her decision when she was accepted. Nooyi arrived in Connecticut in 1978 determined to succeed, describing her identity as an immigrant woman as her  “biggest internal driver.”

Nooyi worked as a receptionist to make ends meet at Yale. After graduating in 1980 at age 24 with a Master’s degree in Public and Private Management, she worked at Boston Consulting Group as a strategy consultant for six years. She married fellow consultant Raj K Nooyi in 1981. The two remain married and have two daughters.

In 1986, Nooyi moved to the telecommunications company Motorola, where she worked first as an internal consultant in the automotive team before pivoting to broader corporate planning.  In 1990, she switched firms again, this time to the Swiss machinery firm ABB where she led corporate strategy, including integrating diverse product divisions around a coherent overall plan. She developed a reputation as a strategic long-term thinker and a skillful communicator, and just 14 years after graduating from Yale she was wooed simultaneously for executive-level posts at two top global companies: PepsiCo and General Electric. She chose Pepsi, reportedly because the CEO there convinced her she would be able to exert real influence.

In 1994, at age 38, Nooyi began working at Pepsi, the company for which she would become famous for leading. Unlike many of her predecessors in the top job, she never worked in sales, instead focused from the beginning on long-term planning.  As she rose through the ranks at Pepsi, she played an instrumental role in shaping global strategy, including through acquiring and selling off subsidiary companies. She led the sale of Yum! Brands (which includes restaurants KFC, Taco Bell, and Pizza Hut) in 1997 and the acquisitions of Tropicana in 1998,Quaker Oats in 2001, and Gatorade, also in 2001. These acquisitions consolidated profits and tightened focus at PepsiCo to the core business of beverages and snacks.

In 2001, Nooyi was promoted to President and Chief Financial Officer. She pushed PepsiCo to adjust its business to meet what she saw as shifting consumer demand for healthier eating. She also pushed PepsiCo to acknowledge the need to be a good corporate citizen on  environmental issues, coining the term “Performance with a Purpose” as Pepsi’s new mantra. Named CEO in 2006, Nooyi led Pepsi for 12 years, during which time the company’s annual net profit more than doubled, growing from $2.7 billion to $6.5 billion. Her strategic guidance was largely a success, with Pepsi offering more low-calorie options and cutting the corporate carbon footprint through leaner packaging and the use of renewable energy.

A third pillar of “Performance with a Purpose” focused on retaining talent at the company, including through paid parental leave for men and women alike. Nooyi spoke candidly during her years as CEO of the unrealistic expectations placed on women executives who are also caregivers. She has acknowledged that her own support system included her mother, husband, and staff at PepsiCo. Nooyi instructed staff to give her daughter permission to play a video game when she called the office only after confirming that her homework and chores were completed.

In a recently published book, My Life in Full (2021), Nooyi focuses on the topic of work-life balance, admitting that there were many times when she felt that she fell short as a mother. On Valentine’s Day 2022, she published a note to her husband Raj sharing credit for her successes with him: “the truth is, there is no such thing as balancing work and family. It's a constant juggling act. And many times, it's the people around us — like our life partners — who make this juggling possible. It's a reminder that family isn't female. Family is family.”

After retiring from Pepsi, Nooyi continues to serve on a number of corporate and nonprofit boards. Her legacy as a brilliant thinker and corporate strategist will likely continue to grow.