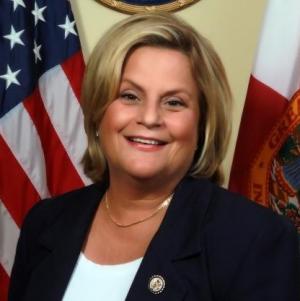 Ileana Ros-Lehtinen is a groundbreaking congresswoman. Not only is she the senior US Representative from Florida, but she is also the first Latina elected to the US Congress, and the first Republican in congress to publicly support the passage of the marriage equality act. She believes that education is “a lifelong journey,” and has emphasized the importance for education throughout her career.

Ileana Carmen Ros was born July 15, 1952 in Havana Cuba, where she spent the first part of her childhood. At age eight, she and her family escaped from Cuba, which was under the control of dictator Fidel Castro. They settled in Miami, Florida. After graduating from Southwest High School, she attended Miami-Dade Community College in 1972 where she earned her Associate of Arts degree. In 1975 she received her Bachelor’s Degree and in 1985 she earned her Master’s Degree, both from Florida International University.  earned her PhD in Education from the University of Miami in 2004.

Her education inspired her to become a teacher, and later the principal of Eastern Academy in Hialeah, Florida. During her time as a teacher and principal, Ros-Lehtinen was inspired to seek public office by the parents of her students. She wanted to “fight on their behalf for a stronger educational system, lower taxes, and a brighter economic future.” She was elected as to the Florida State House of Representatives in 1982, and to the Florida Senate in 1986. She is the first Hispanic woman in to serve in either body. During her time in the Florida State House of Representatives and the state Senate, she worked to ensure that over one- million Floridians were able to send their children to college, by introducing the Florida Prepaid College program, which helps students have tuition to attend college. As a Congresswoman, Ros- Lehtinen supported legislation to allow a wider range of students to have access to Federal financial aid. She also advocates for veterans to have access to a college education when they return from tours of duty.

Ros-Lehtinen broke another barrier in 1989 when she became the first Hispanic woman elected to Congress. During her campaign, Democrat Gerald F. Richman used the slogan, “This is an American seat,” which constituents, especially Cuban-Americans viewed as a thinly veiled, racist rallying cry against Cubans. This campaign tactic backfired for Richman, and Ros-Lehtinen won the election. She did not know that she had broken this barrier until her interview with Katie Couric on the Today Show. When Couric asked her how she felt about being the first Hispanic woman in Congress, Ros-Lehtinen replied, “Wow, I guess it feels good!” Since her first election in 1989, Ros-Lehtinen has continued to break barriers.

During her career, she openly opposed dictatorships—especially Fidel Castro’s—because of her personal experience fleeing Cuba. She became so outspoken that Castro referred to her as “la Loba Feroz,” or the “Ferocious She Wolf.” Ros-Lehtinen responded that the name “reaffirms my commitment to expose the regime’s merciless brutality and work toward crippling its power.” Throughout her career, she continued to speak against regimes not only in Cuba, but in Nicaragua and all over the world.

In 2012, she became the first Republican to support marriage equality. In a 2013 interview for Equality Magazine, Ros-Lehtinen explained the importance of accepting family for who they are. She states, “It’s important to listen to your children, accept your children, and have your children know that you love them unconditionally. It’s not ‘I love you, but…’ there’s no ‘but.’ It’s just ‘I love you.’” Ros-Lehtinen puts these words into actions through her support and love for her transgender son, who is an advocate for the LGBT community. Ros-Lehtinen’s actions were a step toward marriage equality in the United States. Marriage equality passed June 26, 2015.

Ros-Lehtinen has also worked on the behalf of women, especially women in the military. During her career, she wrote the legislation awarding the Congressional Gold Medal to the Women Airforce Service Pilots (WASP) who had served as pilots in World War II. Prior to 1977, these women were not considered veterans, but still had not gained formal recognition for their service in WWII. Ros-Lehitnen along with other representatives and senators lead Congress to award the brave women of WWII the Congressional Gold Medal.

Along with helping women garner the recognition they deserve, Ros-Lehtinen also works to help women in domestic violence situations. She was the lead sponsor of the Violence Against Women Act, which provides resources to prosecute those who have committed acts of violence toward women.

Ros-Lehtinen is not only a remarkable congresswoman, but she is also a wife, mother, and grandmother. She married her husband Dexter Lehtinen June 9, 1984. They have four children and five grandchildren.

In 2017, Ros-Lehtinen announced that she would not be running for reelection in 2018. After a career lasting over 35 years, Lehtinen stated to the Miami Herald, “It’s been such a delight and a high honor to serve our community for so many years and help constituents every day of the week,” she continued, “We just said ‘It’s time to take a new step.’”

Throughout her career, Ileana Ros-Lehtinen has worked to advocate for women, while also breaking through the glass ceiling herself. As the first Hispanic woman in Congress, she has lead the way for other women to run for public office. Throughout her extensive career, she has advocated for women in the military, education for all, and for marriage equality. Her efforts have helped shape the United States.