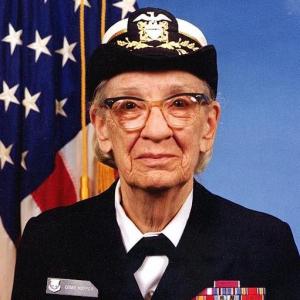 At a very young age Grace Murray Hopper showed an interest in engineering. As a child, she would often take apart household goods and put them back together. Little did her family know, her curiosity would eventually gain her recognition from the highest office in the land.

Hopper was born on December 9, 1906 in New York City. As a child, she attended a preparatory school in New Jersey. Later, she enrolled at Vassar College. After graduating with her bachelor’s degree, Hopper went to Yale University, where she earned her Masters and PhD in Mathematics. Afterwards she began teaching at Vassar College.

In 1943, Hopper resigned her position at Vassar to join the Navy WAVES (Women Accepted for Voluntary Emergency Service). In 1944, she was commissioned as a Lieutenant (Junior Grade) and assigned to the Bureau of Ordnance Computation Project at Harvard University. Her team worked on and produced the Mark I, an early prototype of the electronic computer. Hopper wrote a 500-page Manual of Operations for the Automatic Sequence-Controlled Calculator in which she outlined the fundamental operating principles of computing machines. Additionally, while working on the Mark I, Hopper coined the word “bug” to describe a computer malfunction.

After the end of the war, Hopper became a research fellow on the Harvard faculty and in 1949, joined the Eckert-Mauchly Corporation, continuing her pioneering work on computer technology. Hopper was involved in the creation of UNIVAC, the first all-electronic digital computer. She invented the first computer compiler, a program that translates written instructions into codes that computers read directly. This work led her to co-develop the COBOL, one of the earliest standardized computer languages. COBOL enabled computers to respond to words in addition to numbers. Hopper also lectured widely on computers, giving up to 300 lectures per year. She predicted that computers would one day be small enough to fit on a desk and people who were not professional programmers would use them in their everyday life.

During her career, Hopper retained her affiliation with the Naval Reserve. By 1966, she attained the rank of Commander. The following year in 1967, Hopper was called back to active duty and she was assigned to the Chief of Naval Operations’ staff as Director, Navy Programming Languages Group. She was promoted to Captain in 1973, to Commodore in 1983, and to Rear Admiral in 1985. Two years later she was awarded the Defense Distinguished Service Medal, the highest decoration given to those who did not participate in combat.

Hopper’s work with computers not only gained national attention, but she was recognized internationally. In 1973, Hopper was named a distinguished fellow of the British Computer Society, then the first and only woman to hold the title. After retirement Hopper returned to the classroom, where she taught and inspired students until her death on January 1st, 1992. Although Hopper had many career accomplishments, she later told her biographer, her greatest joy came from teaching. In 2016, Hopper was posthumously awarded the Presidential Medal of Freedom. Her body is interred at Arlington National Cemetery.