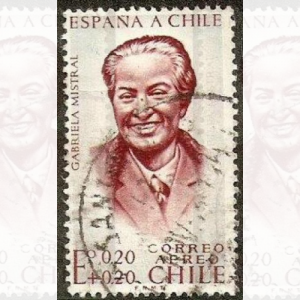 As a Chilean author and educator, Gabriela Mistral became the first Latin American author to receive the Nobel Prize in literature. She boldly advocated for the rights of women, children, the poor, and many other disadvantaged groups in her community.

Gabriela Mistral was born on April 7, 1889. At birth, she was named Lucila Godoy Alcayaga, but later took on the penname Gabriela Mistral. Born in a small town named Vicuña in the Chilean Andes Mountains, her birthplace was four hundred miles away from the capital of Chile. She grew up in the nearby village of Monte Grande with her mother and her sister who was fifteen years older than her. Mistral’s father was a schoolteacher that would write poems and sing to her with his guitar. Unfortunately, he left the family when Mistral was three years old and only came back on rare occasions. Even though she did not see him often, his creativity influenced Mistral’s love for poetry. Her grandmother also inspired her love for literature and poetry by encouraging her to memorize Bible verses. Mistral’s grandmother was very religious and loved to teach her the Psalms of David that were biblical poems.

When Mistral was eleven years old, she had to leave her happy family in Monte Grande to go to school in Vicuña. She remembered, “I was happy until I left Monte Grande, and then I was never happy again.”[1] Mistral faced many obstacles while in Vicuña, including being accused of stealing school supplies, being denied admission to the Normal School in La Serena because the teachers thought she wrote like a “troublemaker” that was not a Christian, and later the death of her first love by suicide. These experiences taught Mistral about life, justice, and fairness, so she began to write about her experiences. She got a job as a teacher’s aide to earn money to support her mother, while submitting her writings to newspapers. In 1906, she published an article called "La instrucción de la mujer" (The education of women) that spoke about the limits placed on women’s education. Finally in 1910, Mistral was able to earn her teaching certificate by studying on her own to pass the teachers exam. She immediately began teaching in many different regions across Chile.

A few years after earning her certification, Mistral earned her first publication outside of Chile. She sent a short story and some poems to a literary magazine in Paris called Elegancias and they were published in 1913. This attracted the attention of the future president of Chile, who appointed her as the principal of the Liceo de Niñas (High School for Girls) in Punta Arenas. As the principal, she had many responsibilities, but was located in a section of Chile that was extremely far away from the rest of the country. During this time, she wrote three poems called "Paisajes de la Patagonia" (Patagonian Landscapes) that were inspired by her experiences being separated from her family and the rest of the world. However, Mistral also organized many important initiatives during that time including evening classes for workers who could not attend school and classes for the poor. After two years, Mistral was sent to be the principal in the Chilean Indian territory of Liceo de Niñas in Temuco. While there, she witnessed the mistreatment of the Native Indian population and was inspired to write about it in "Poemas de la madre más triste" (Poems of the Saddest Mother).

By 1921, Mistral was the principal of a new and prestigious school in the capital of Chile. While there, she wrote and published poems, articles, and many other educational materials. She also became interested in religious and spiritual writings through the Chilean Theosophical Association. A year later, Mistral published her first book called Desolación. She began traveling and lecturing outside of Chile following her publication. She also moved to Mexico shortly and helped to rebuild the education system after the Mexican Revolution. After leaving Mexico, she published her second book of poems and continued to travel around the world sharing her work. In 1925, Mistral became the secretary of the Latin American section in the League of Nations in Paris. To earn a stable income, she continued to travel and taught classes at various colleges including Columbia University, Barnard College, and Middlebury College. By 1945, Mistral was a household name. On November 15, 1945, she became the first Latin American to receive the Nobel Prize in Literature. A few years later, she was awarded the National Literature Prize in Chile.

In the last years of her life, Mistral lived in New York and battled pancreatic cancer. Gabriela Mistral died on January 10, 1957 at age 67.