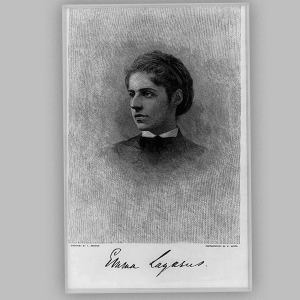 As a Jewish American writer and activist, Emma Lazarus has been widely recognized for her work. However, she is most famous for her poem, “The New Colossus,” that is engraved at the base of the Statue of Liberty. Her words; “Give me your tired, your poor, your huddled masses yearning to breathe free,” are almost as well-known as the Statue itself.

Emma Lazarus was born on July 22, 1849 in New York City. The fourth of seven children, Lazarus was born to a wealthy Sephardic Jewish family of Portuguese descent. Her father, Moses, was a successful sugar merchant who made certain his children got the best education. Lazarus and her siblings studied with private tutors and learned multiple languages including German, French, and Italian. Lazarus excelled in academics, and by the time she was seventeen, she had already written a book of poems called Poems and Translations: Written Between the Ages of Fourteen and Sixteen. Her father was one of her biggest supporters and he decided to publish her book of poems for “private circulation.” Shortly after, Lazarus decided to send a copy of her first book to the famous writer Ralph Waldo Emerson. Emerson quickly became her mentor and when she published her next book of poetry in 1871, she dedicated the main poem, “To My Friend, Ralph Waldo Emerson.” This book, entitled Admetus and Other Poems, received critical acclaim.

Three years later, Lazarus published her first and only novel called Alide: An Episode in Goethe's Life based on the autobiography of the German writer Goethe. The only other work of fiction that Lazarus published was a short story in 1878 in Scribner’s Monthly entitled “The Eleventh Hour.” For the next decade, her poems were published in American magazines, including her poem called “Progress and Poverty” that was published in the New York Times in 1881. That same year, she published translations of poetry written by German Jewish poet Heinrich Heine. She published the first one called Poems and Ballads of Heinrich Heine in 1881 and published Songs of a Semite: The Dance to Death and Other Poems the following year.

As Lazarus continued to write, she used her poems and essays to speak out against the persecution of Jews in Europe and growing anti-Semitism in the United States. She publicly proclaimed her identity as a Jewish poet and advocated for Jewish issues internationally. Lazarus wrote in various publications promoting Zionism and a Jewish homeland in Palestine. In addition to her writing, she also met with immigrants and refugees, volunteered at the Hebrew Immigrant Aid Society, and helped establish the Hebrew Technical Institute in New York to provide Jewish immigrants with vocational training. In 1883, Lazarus formed the Society for the Improvement and Colonization of East European Jews. That same year, she wrote “The New Colossus” to be presented at auction to raise money for the pedestal of the Statue of Liberty. The organizers decided to print the poem in the Catalogue of the Pedestal Fund Art Loan Exhibition at the National Academy of Design to inspire continued work on the statue.

Following her work for the auction, Lazarus began traveling to Europe to participate in social reform. During her first trip, she met with Robert Browning, William Morris, and Jewish leaders, which she documented in her essay, “A Day in Surrey with William Morris.” She traveled to Europe again from May 1885 until September 1887. Unfortunately, when Lazarus returned New York City she was very sick. Emma Lazarus died on November 19, 1887.

Sixteen years after her death, Lazarus’ most famous poem “The New Colossus,” was engraved on a plaque in the pedestal of the Statue of Liberty. In 1951, the Emma Lazarus Federation of Jewish Woman's Clubs was formed, however the organization disbanded in 1989.