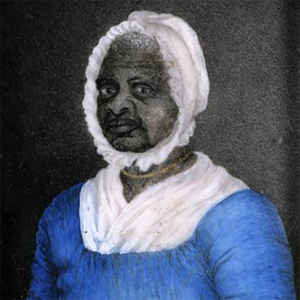 Less than one year after the adoption of the Massachusetts State Constitution, a brave enslaved woman challenged the document’s proposed principles. Motivated by the promise of liberty, Elizabeth Freeman, born as “Mum Bett,” became the first African American woman to successfully file a lawsuit for freedom in the state of Massachusetts. This case marked the beginning of a group of “freedom suits” that would ultimately lead the Massachusetts Supreme Judicial Court to outlaw slavery in their state.

Mum Bett was born in Claverack, Columbia County, New York as a slave. Although her exact birthdate is unknown, it is believed that she was born around the year 1744. She grew up on the plantation of Pieter Hogeboom with her younger sister Lizzie. When Hogeboom’s daughter married Colonel John Ashley, he gave Bett and her sister to the new couple. During her time at the Ashley’s, Bett gave birth to a daughter, but the identity of the father is unknown. Although she could not read or write, Bett was clever and strategic. It is reported that Mrs. Ashley was cruel to her slaves. One day she attempted to strike Bett’s sister with a heated kitchen shovel. Bett protected her sister by blocking Mrs. Ashley’s strike but received a serious wound on her arm that never healed. Instead of covering her arm, she left her wound visible as evidence of her mistreatment.

Bett was determined to gain her freedom. Her master, Colonel Ashley, was a wealthy citizen of Sheffield, Massachusetts. He served as a judge of the Berkshire Court of Common Pleas. In January of 1773, he moderated the local committee that wrote the Sheffield Declaration. This declaration was approved on January 12, 1773. It stated that “mankind in a state of nature are equal, free, and independent of each other, and have a right to the undisturbed enjoyment of their lives, their liberty and property.” This same language was used in the United States Declaration of Independence of 1776 and in the Massachusetts Constitution of 1780. Evidence suggests that Bett overheard these ideas when Colonel Ashley held events in his home and when the documents were read aloud in the public square. Seeking freedom, Bett turned to Theodore Sedgwick, a prominent attorney who helped draft the Sheffield Declaration with Colonel Ashley. Bett, along with an enslaved man named Brom, began the process of fighting for their freedom. Historians note that Sedgwick, along with many of the lawyers in the area, decided to use the case as a “test case” to determine if slavery was constitutional under the new Massachusetts Constitution.

In May of 1781, Sedgwick and his team filed a document called a “writ of replevin” with the Berkshire Court of Common Pleas. This document ordered Colonel Ashley to release Bett and Brom. The Berkshire Court stated that Bett and Brom were not Colonel Ashley’s legitimate property. However, he refused to release them from his possession. By August 1781, the case went to the County Court of Common Pleas of Great Barrington in the case known as Brom and Bett v. Ashley. During the case, Sedgwick argued that the Massachusetts Constitution outlawed slavery. The jury agreed with Sedgwick and decided that Bett and Brom were not Colonel Ashley's property. Bett and Brom were set free and awarded 30 shillings and the costs of the trial. Colonel Ashley filed an appeal to the Supreme Judicial Court but dropped his case a few months later. His decision was likely informed by the Quock Walker trials that declared slavery incompatible with the new Massachusetts Constitution.

Once she gained her freedom, Mum Bett changed her name to Elizabeth Freeman. Colonel Ashley asked her several times to return to his home as a paid servant, but she declined. She became a paid domestic worker in Sedgwick’s household instead. Freeman also worked as a prominent healer, midwife, and nurse. After 20 years, she was able to buy her own house where she lived with her children. Elizabeth “Mum Bett” Freeman died on December 28, 1829 and was buried in the Sedgwick family plot in Stockbridge, Massachusetts. She is believed to have been 85 years old and is the only non-Sedgwick buried in the “inner circle” of the Sedgwick family plot.