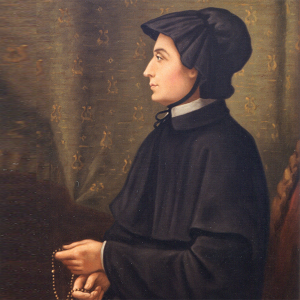 Saint Elizabeth Ann Seton was the first American to be canonized as a saint. She was raised Episcopalian, but later converted to Catholicism. Through the struggles and tragedies she faced in life, she remained devout. She is the founder of the first Catholic schools in the United States and is the patron saint of Catholic schools, widows, and seafarers.

Elizabeth Ann Bayley Seton was born into a wealthy Episcopalian family in New York City on August 28, 1774. Her father, Dr. Richard Bayley, was a doctor and one of the first health officials in New York City. Her mother, Catherine Charlton Bayley, died when Elizabeth was only three years old.

At age nineteen, Elizabeth married William Magee Seton on January 25, 1794. Together they had five children, Anna Maria, William, Richard, Catherine, and Rebecca. Seton enjoyed a full life of loving service to her family, care for the underprivileged, and religious development in her Episcopal faith.

In the late 1700s, a double tragedy visited Seton. The Seton family’s life took a turn when her husband William became ill. He suffered from tuberculosis and continued to grow worse. Hoping to improve his health, the couple and their eldest daughter Anna Maria decided to go to Italy. On November 19th, they arrived in Leghorn and were placed in quarantine. They were released from quarantine on December 19th. William died 8 days later. Waiting to return to the United States, Seton and Anna Maria spent several months with the Filicchi brothers who were business associates of her husband.

While in Italy, Seton learned about Roman Catholicism for the first time. She was especially drawn to the doctrine of the Eucharist as the real body of Christ.

She returned to New York in June 1804. After her return, she continued to feel conflicted between the Episcopal and Catholic faiths. After almost a year, she officially converted to Roman Catholicism on March 14, 1805. She was confirmed in 1806 and chose Mary as her confirmation name. Seton admired the Virgin Mary and chose her as a saint to continue to guide her spiritually. Seton’s choice to convert resulted in three years of financial struggle and social discrimination. Seton opened a boarding house for boys. When the student’s parents discovered that she was Catholic, they removed their children from the home.

Seton and her family were invited by several priests to move to Baltimore, Maryland. They moved in June 1808 to open a school for girls. Catholic women from around the country came to join her work and, over time, they created a convent. The women soon moved to Emmitsburg, Maryland, where they formally began their religious life as Sisters of Charity of St. Joseph's on July 31, 1809. This was the first sisterhood in the United States. Elizabeth Seton was named first superior and given the title of “Mother.” She served in that role for the next twelve years.

As the community took shape, Elizabeth directed its vision. On July 19, 1813, Seton and eighteen other sisters made vows of poverty, chastity, obedience, and service to the poor. They would renew these vows annually. In 1814 the community accepted its first mission outside Emmitsburg, an orphanage in Philadelphia. By 1817 sisters had been sent to staff a similar work in New York.

While in Emmitsburg, two of Seton’s daughters died from to tuberculosis, Anna Maria in 1812 and Rebecca in 1816. By that time, she herself was weak and increasingly subject to poor health. She spent the last years of her life directing St. Joseph's Academy and her growing community. She died January 4, 1821, at 46 years old.

Although she passed away at a young age, Seton’s legacy lived on. She life was declared holy (otherwise known as beatified) by Pope John XXIII on December 18, 1959. She was canonized, or officially made a saint, September 14, 1975, by Pope Paul VI. She was the first native-born saint of the United States.

In order to be canonized, a person must either be a martyr, or perform at least two miracles. For Seton, her miracles occurred through intercession, or prayers asking for help. The first miracle attributed to Seton happened in New Orleans, where Sister Gertrude Korzendorfer made a full recovery from pancreatic cancer in the 1930’s. Four-year-old Ann Theresa O’Neill was also cured of acute, lymphatic leukemia in 1952, after Sister Mary Alice prayed to Seton. Finally, Carl E. Kalin was given a few hours to live in 1963, when he was brought to St. Joseph’s Hospital in New York. He was diagnosed with meningitis of the brain and was in a coma. The Sisters of Charity of the New York chapter visited Kalin, and placed a piece of Seton’s bone, known on a relic, on him and prayed to Seton. Kalin woke a few hours later. Medical professionals cannot explain how these three people were cured, therefore they are considered miracles.

During her lifetime and after, Elizabeth Ann Seton was known for her devoutness, her compassion, and her desire to help others. She converted to Catholicism, where she worked to establish and grow the Sisters of Charity, who pray to her to cure others. Elizabeth Ann Seton is the remarkable first American saint.