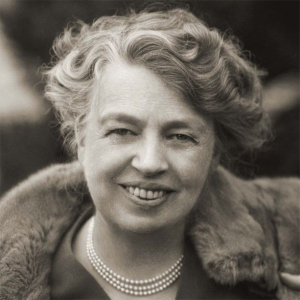 A shy, insecure child, Eleanor Roosevelt would grow up to become one of the most important and beloved First Ladies, authors, reformers, and female leaders of the 20th century.

Born on October 11, 1884 in New York City, Anna Eleanor Roosevelt was the first of Elliot and Anna Hall Roosevelt’s three children. Her family was affluent and politically prominent, and while her childhood was in many ways blessed, it was also marked by hardship: her father’s alcoholism, as well as the deaths of both parents and one of her brothers before she was ten years old. She was raised by her harsh and critical maternal grandmother, who damaged Eleanor’s self-esteem. Timid and awkward, she believed that she compared badly with other girls.

In 1899, Roosevelt began her three years of study at London’s Allenswood Academy, where she became more independent and confident. Her teacher, Mademoiselle Marie Souvestre, with her passionate embrace of social issues, opened Roosevelt up to the world of ideas and was an early force in Roosevelt’s social and political development.

Roosevelt returned to New York for her social debut in 1902. She became involved with the settlement house movement, teaching immigrant children and families on Rivington Street. In 1905, after a long courtship, she married her distant cousin Franklin Delano Roosevelt, a charming, Harvard graduate in his first year of law school at Columbia University. Her uncle and close relative, President Theodore Roosevelt, walked her down the aisle.

The Roosevelts settled in New York, where Eleanor found herself under the thumb of her controlling mother-in-law, Sara Roosevelt, who, like her grandmother earlier, was harsh in her criticism of her daughter-in-law. While Franklin advanced his career, his wife raised their daughter and four sons under the watchful eye of her often belittling mother-in-law.

All that changed in 1911, when Franklin was elected to the New York State Senate, and the couple moved to Albany, away from Sara. Two years later, the Roosevelts moved to Washington, DC, when Franklin joined Woodrow Wilson’s administration as Assistant Secretary of the Navy. While she was initially uncomfortable with the DC political scene, Roosevelt was growing in her political consciousness. When World War I broke out, she volunteered with various relief agencies, further increasing her visibility and political clout. Hurt when she discovered in 1918 that her husband had had an affair with another woman, she remained married, though her feelings changed. She began to live a more independent life and often escaped to Val-Kill, her upstate New York home, where she was also part of a women-owned furniture cooperative. Nonetheless, she remained his political ally and advisor, among those who urged him to remain in public life despite the polio he contracted in 1921.

Although initially wary of women’s suffrage, after its passage in 1920, Roosevelt promoted women’s political engagement, playing a leadership role in several organizations, including the League of Women Voters and the Women’s Trade Union League. She surrounded herself with politically astute women such as Molly Dewson and Rose Schneiderman. She was head of the Women’s Division of the Democratic National Committee, recruited in 1928 to help Al Smith’s presidential bid. Her activities were widely covered in the media in the 1920s, making her more publically recognizable than her husband when he decided to run for governor in 1928. Though unhappy about his bid for the governorship and his equally successful run for the presidency in 1932, Roosevelt became the most politically active and influential First Lady in history, using the position to advance many of her progressive and egalitarian goals.

In the White House from 1933 to 1945, First Lady Roosevelt kept a dizzying schedule. She wrote nearly 3,000 articles in newspapers and magazines, including a monthly column in Women’s Home Companion, where she asked the public to share their stories, hardships, and questions. In a few short months, she received several hundred thousand responses and donated what she earned from the column to charity. She also authored six books and traveled nationwide delivering countless speeches. She held weekly press conferences with women reporters who she hoped would get her message to the American people.

Roosevelt had immense influence on her husband’s decisions as president and in shaping both his cabinet and the New Deal. Working with Molly Dewson, head of the Women’s Division of the DNC, she lobbied her husband to appoint more women, successfully securing Frances Perkins as the first woman to head the Department of Labor, among many others. She also ensured that groups left out of the New Deal were included by seeking revisions to programs and legislation, including greater participation for women in the heavily male-dominated Civilian Conservation Corps. She also championed racial justice, working to help black miners in West Virginia, advocating for the NAACP and National Urban League, and resigning, with much media fanfare, from the Daughters of the American Revolution when they refused to allow African American singer Marion Anderson to perform in their auditorium.

Roosevelt’s political activism did not end with her husband’s death in 1945. Appointed in 1946, she served for more than a decade as a delegate to the United Nations, the institution established by her husband, and embraced the cause of world peace. She not only chaired the United Nations Human Rights Commission, she also helped write the 1948 United Nations Declaration of Human Rights. She spoke out against McCarthyism in the 1950s. In 1960, at the request of President John F. Kennedy, she chaired the President’s Commission on the Status of Women, which released a ground-breaking study about gender discrimination a year after her death in 1963. She also worked on the Equal Pay Act that was passed that same year. Roosevelt’s commitment to racial justice was evident in her civil rights work and efforts to push Washington to take swifter action in housing desegregation and protections for Freedom Riders and other activists. Kennedy nominated Roosevelt for the Nobel Peace Prize and though she did not win, she remained at the top of national polls ranking the most respected women in America decades after her death.