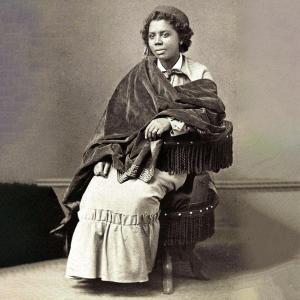 Edmonia Lewis is considered the first professional BIPOC sculptor in the United States and the first to achieve international acclaim. Even though much of her work has not survived into the 21st century, Lewis used her art to depict the stories of women and Indigenous people with reverence and beauty. Shattering gender and racial expectations in the 19th-century U.S., her life story is a testament to the ability to succeed despite adversity.

Details and stories of Lewis’s life remain fuzzy. Lewis was known to tailor stories of her life to win over the audience she was addressing, meaning stories she told would change or disappear over time. Scholars have noted that she used both fact and fiction to “embroider” her life story, particularly after she became internationally known. What we do know is that Lewis was an African American woman in a field dominated by white men and, despite the odds, she succeeded.

Mary Edmonia Lewis was born in 1844 in either Ohio or near Albany, New York. Her father, who worked as a gentleman’s servant, was West Indian and living as a free person of color in the United States. Her mother, who was part Chippewa, was an artist in her own right and made moccasins and other trinkets to sell to tourists. Lewis sometimes traced her desire to become an artist to her mother. Orphaned at age five, Lewis went to live with her aunts near Niagra Falls, New York. She was given a robust education, financed and supported mostly by her older, half-brother, Samuel, who had found financial success. According to biographers, she was educated by an order of African American nuns in Baltimore and at a coeducational school in upstate New York before matriculating to Oberlin College in Ohio.

Oberlin College, founded in 1833, was an early proponent of coeducation, abolitionism, and integration. While at Oberlin, Lewis boarded with white abolitionist and school trustee, John Keep. Yet Oberlin’s mission statement did not mean Lewis was free from racial attacks. During her time at Oberlin, Lewis was accused of attempting to poison her fellow classmate and roommate. While she was declared innocent after a trial, the abuse continued. A mob of white men kidnapped, beat, and left her to die in a field in the winter of 1862 because of the poisoning charge. She survived the attack, but was then accused of stealing art supplies from the school. Lewis left Oberlin before she could graduate; it is unclear if she was expelled or left of her own accord.

With the encouragement and financial support of her brother Samuel, Lewis went to Boston in order to pursue her dream of becoming an artist. She met portrait sculptor Edward Brackett and began her studies under his tutelage. With minimum training, she began to produce portrait medallion—small, generally circular, single-sided portrait medals—of well-known abolitionists including William Lloyd Garrison, Charles Sumner, and Wendell Phillips. She also produced sculptural busts of John Brown and Colonel Robert Gould Shaw. This early work was financially successful, and Lewis earned enough money to finance her first trip to Europe in 1865.

Lewis settled in Rome where she joined a growing community of American artists living abroad. She told the New York Times in 1878, she was, “practically driven to Rome, in order to obtain the opportunities for art culture, and to find a social atmosphere where I was not constantly reminded of my color. The land of liberty had no room for a colored sculptor.” In her rented studio on the Piazza Barberini, Lewis designed, produced, and finished numerous sculptures. While most sculptors working in Rome at the time hired Italian workmen to create the final marble product, Lewis was unique in that she did the entire process herself. Her studio in Rome became a “must-see” for Americans taking their European Tours, and she continued to create busts of famous Americans, including Abraham Lincoln and Ulysses S. Grant, who supposedly sat for his sculpture. She also created her largest and most powerful work, The Death of Cleopatra. The sculpture, depicting the last moments of Egyptian Queen Cleopatra’s life, took four years for Lewis to complete and ended up weighing 3,000 pounds. In 1876, she shipped the sculpture across the Atlantic to Philadelphia so it could be considered for display in the Centennial Exhibition. The committee decided to include it in the hall set aside for American artists; the sculpture created a stir for its realism and since it depicted Cleopatra topless, which many male critics thought was inappropriate.

Beyond her statue of Cleopatra, Lewis created numerous works depicting her dual African American and Native American ancestry. She became known for depicting “ethnic and humanitarian subject matter,” including a sculpture of Hagar, the Egyptian maidservant to Abraham’s wife Sarah described in the Bible. Another of her more famous works was inspired by the Henry Wadsworth Longfellow poem, “The Song of Hiawatha.” The poem, published in 1885, was an epic that featured Native American characters. Lewis created at least three figure group sculptures inspired by the poem; each depicted Native Americans and their civilizations respectfully.

Much is not known about the end of Lewis’s life. She disappeared from the public eye in the 1880s. It is not known if she ever married or had children. Only recently has Lewis’s biographer, Marilyn Richardson, found that Lewis died in London on September 17, 1907 of Bright’s Disease.

Lewis’s work can now be found in some of the most important and famous American museums, including the Howard University Gallery of Art, the Detroit Institute of Arts, the Metropolitan Museum of Art, the Smithsonian American Art Museum, and the Baltimore Museum of Art. More than a century after its initial display at the Centennial, Lewis’s Death of Cleopatra was found covered in graffiti and paint in Forest Park, a Chicago suburb. It was donated to the Smithsonian in the early 1990s and now welcomes visitors to the museum’s third floor galleries.