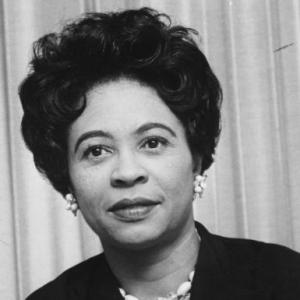 When Daisy Bates was three years old her mother was killed by three white men. Although Bates, was just a child, her biological mother’s death made an emotional and mental imprint on her. The unfortunate death forced Bates to confront racism at an early age and pushed her to dedicate her life to ending racial injustice.

Daisy Bates was born in Huttig, Arkansas in 1914 and raised in a foster home. When she was fifteen, she met her future husband and began travelling with him throughout the South. The couple settled in Little Rock, Arkansas and started their own newspaper. The Arkansas Weekly was one of the only African American newspapers solely dedicated to the Civil Rights Movement. The paper was circulated state wide. Bates not only worked as an editor, but also regularly contributed articles.

Naturally, Bates also worked with local Civil Rights organizations. For many years, she served as the President of the Arkansas chapter of the National Association for the Advancement of Colored People (NAACP). Her work with the NAACP not only transformed the Civil Rights Movement but it also made Bates a household name.

In 1954, the Supreme Court ruled segregated schools unconstitutional. After the ruling Bates began gathering African American students to enroll at all white schools. Often the white schools refused to let black students attend. Bates used her newspaper to publicize the schools who did follow the federal mandate. Despite the continuous rejection from many Arkansas public schools, she pushed forward.

When the national NAACP office started to focus on Arkansas’ schools, they looked to Bates to plan the strategy. She took the reins and organized the Little Rock Nine. Bates selected nine students to integrate Central High School in Little Rock in 1957. She regularly drove the students to school and worked tirelessly to ensure they were protected from violent crowds. She also advised the group and even joined the school’s parent organization.

Due to Bates’ role in the integration, she was often a target for intimidation. Rocks were thrown into her home several times and she received bullet shells in the mail. The threats forced the Bates family to shut down their newspaper.

After the success of the Little Rock Nine, Bates continued to work on improving the status of African Americans in the South. Her influential work with school integration brought her national recognition. In 1962, she published her memoirs, The Long Shadow of Little Rock. Eventually, the book would win an American Book Award. Bates was invited to sit on the stage during the program at the March on Washington for Jobs and Freedom in 1963. Due to a last-minute change, Bates was invited to speak at the march.

In 1968, Bates moved to Mitchellville, Arkansas. The majority black town was impoverished and lacked economic resources. When Bates arrived, she used her organizational skills to pull together residents and improve the community.

Bates died on November 4th, 1999. For her work, the state of Arkansas proclaimed the third Monday in February, Daisy Gatson Bates Day. She was posthumously awarded the Medal of Freedom in 1999.