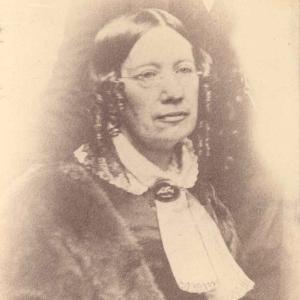 A member of a prominent activist and religious family, Catharine Esther Beecher was a nineteenth century teacher and writer who promoted equal access to education for women and advocated for their roles as teachers and mothers. Embracing traits associated with femininity such as nurturance, Beecher argued that women were uniquely suited to the moral and intellectual development of children, either as mothers or as educators.

Born in East Hampton, New York on September 6, 1800, Catharine was the eldest of nine children of Roxana Foote and Lyman Beecher, a renowned Presbyterian minister and evangelist. When Beecher was nine years old, the family moved to Litchfield, Connecticut, where she attended the Litchfield Female Academy.

Beecher was 16 years old when her mother died and she began managing the household. A year later, her father married Harriet Porter and the couple had three sons and a daughter—Harriet Beecher Stowe, author of the best-selling antislavery novel Uncle Tom’s Cabin (1852). Catharine’s other famous siblings included Isabella Beecher Hooker, a suffrage leader and Henry Ward Beecher, a Brooklyn pastor, whose lectures against slavery or supporting temperance and women’s suffrage attracted thousands.

While still in her teens, Beecher wrote poems that were published in the Christian Spectator under the signature C.D.D. By age 22, she was engaged to Yale University professor Alexander Fisher, though she had doubts about their union. When he died in a shipwreck, Beecher dedicated her life exclusively to education.

In 1823, Beecher and her sister Mary founded the Hartford Female Seminary. In most female schools of the era, students learned primarily fine arts and languages, but Beecher offered a full range of subjects. An early pioneer of physical education for girls, Beecher introduced calisthenics to improve women’s health and in defiance of prevailing notions of women’s fragility.

In 1831, Beecher moved west when her father became president of Lane Theological Seminary, a progressive Cincinnati institution on the Ohio frontier. There, she opened the Western Female Institute, which struggled financially. She also worked on the McGuffey readers, the first nationally-adopted textbooks for elementary students.

Thereafter, Beecher traveled, supporting herself with lectures and books. Her most famous works—A Treatise on Domestic Economy (1841), The Duty of American Women to Their Country (1845), and The Domestic Receipt Book (1846)—demonstrated her beliefs about women’s central role as mothers and educators, raising the next generation of citizens and creating a sanctuary for their families within the home. Considered a handbook on women’s appropriate gender roles, her Treatise and other books advocated self-sacrifice, modesty, and frugality along with childcare and cooking. In 1852 she founded the American Woman’s Educational Association, which aimed to send teachers west to build schools on the developing frontier.

Unlike other family members, Beecher opposed women’s suffrage. In The True Remedy for the Wrongs of Women and Woman Suffrage and Woman’s Profession (1871), she argued that home and school are such important social forces that women should limit their lives to them. While she did not challenge women’s sphere, she did see their domestic and teaching roles as the source of women’s power and influence.

In the 1860s and 1870s, Beecher returned to brief teaching stints. In 1869, she and sister Harriet Beecher Stowe produced a follow-up to the Treatise entitled, The American Woman’s Home.