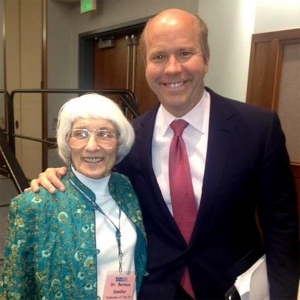 Known as the “Godmother of Title IX,” Bernice Sandler fought for women’s rights in education. After being denied equal access to teaching jobs at her university, Sandler took matters into her own hands. In addition to starting a social revolution for women’s rights, she became the first woman ever appointed to a Congressional committee to work specifically on women’s issues.

Bernice Resnick Sandler was born on March 3, 1928 in Brooklyn, New York. Her parents were Jewish immigrants for Russia and Germany. When she was born, her parents intended to name her Beryl. Unfortunately, the doctor made a mistake when writing down her name and wrote down Bernice instead. Her family then gave her the nickname “Bunny,” which is a translation of Bernice in Yiddish. As Sandler grew up, she became very aware that she was not allowed to participate in many activities because she was a girl. For example, she was told that she could not be a crossing guard or run the slide projector in school. However, Sandler told her mother at a very young age that she was going to change the world.

Sandler attended Erasmus Hall High School and went on to earn a bachelor’s degree in Psychology from Brooklyn College. At the time, Brooklyn College was New York City’s first liberal arts college that accepted both male and female students. Sandler stayed in the city and attended the City College of New York to earn her master’s degree in Clinical and School Psychology. In 1952, she married Jerrold Sandler and the couple had two children. Bernice decided to continue her education and received the Doctor of Education degree in Counseling and Personnel Services from the University of Maryland. After graduating, Sandler began teaching at the University of Maryland part-time. She applied for the full-time teaching positions in her department, but she was continually denied. When she asked why she didn’t get the job, she was told that she “comes on too strong for a woman.” She was rejected two more times and was told that she was “just a housewife who went back to school.”

After being rejected from the university, Sandler joined the Women's Equity Action League (WEAL) as the Chair of the Action Committee for Federal Contract Compliance. While researching the strategies of African American civil rights activists that might apply to women’s rights, Sandler found an executive order written by President Lyndon B. Johnson. The order stated that federal companies could not discriminate based on race, color, religion and national origin. After doing more research, Sandler found that President Johnson amended the law in 1968 to include gender discrimination. She realized that many universities were federal contracts and that they were illegally not hiring women. She immediately called the director of the organization and planned how to fight for equality for women. From 1969 to 1971, she worked with the Women's Equity Action League to file sex discrimination charges against 250 schools. In 1970, she filed a class-action lawsuit against all universities in the United States. This lawsuit was the beginning of Sandler’s career working for equality in the workplace.

While working on the lawsuit, Sandler worked with members of Congress as the Educational Specialist for the House of Representatives Special Subcommittee on Education. She soon wrote the first federal policy report in education about discrimination based on gender. In 1972, her hard work resulted in the Title IX Educational Amendment that states that “No person in the United States shall, on the basis of sex, be excluded from participation in, be denied the benefits of, or be subjected to discrimination under any education program or activity receiving Federal financial assistance.”[1] President Richard Nixon signed it into law that same year. After the law passed, Sandler realized that she had to continue to fight for women’s equality. She became the director of the Project on the Status and Education of Women at the Association of American Colleges, where she continued to fight for gender equality in education. In 1975, Presidents Ford and Carter appointed Sandler as the Chair of the National Advisory Council on Women’s Educational Programs. After nearly twenty years working for those organizations, Sandler became the senior scholar in residence at the Women’s Research and Education Institute in Washington, D.C. She gave over 2,500 presentations on gender discrimination and worked with many advocacy groups to fight for women’s rights.

In 2007, Sandler published an article in The Cleveland State Law Review stating that Title IX started a social "social revolution with an impact as large as the Industrial Revolution."[2] She was inducted into the National Women’s Hall of Fame in 2013 for all of her hard work. Bernice Sandler died on January 5, 2019 at age 90 of cancer.