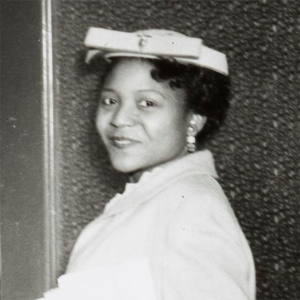 As she walked to school each day, Autherine Lucy was always in danger. She was the first African American student to attend the University of Alabama, and many white people did not want her to attend. On her third day of school, she had to lock herself in a classroom after an angry group of white students chased her and threw rotten eggs. However, thirty-two years later, Lucy was honored by the same college that tried to keep her from attending.

Autherine Lucy was born on October 5, 1929 as the youngest of ten brothers and sisters. Born in Shiloh, Alabama, she was always very smart. Her mother Minnie Maud Hosea and her father Milton Cornelius Lucy were farmers. Lucy left Shiloh in 1947 to attend Selma University in Selma, Alabama. She earned a teaching certificate from the school, but she wanted to continue studying. She then attended a school for African Americans called Miles College in Birmingham, Alabama. She graduated with a bachelor’s degree in English in 1952. At Miles College, Lucy met Pollie Anne Myers and the two became great friends.

After their graduation, Lucy and Myers decided that they wanted to get another degree. Myers decided that they should apply to the University of Alabama. This school did not allow African Americans to attend because the schools in Alabama were still segregated. "I thought she was joking at first, I really did," Lucy said to a reporter years later. Myers was serious, and they sent their applications to the school on September 4, 1952. They received a letter back from the school nine days later. They were accepted to the University of Alabama.

When it was time to fill out their paperwork, the school leaders at the University of Alabama realized that Lucy and Myers were African American. The leaders decided to change their minds about letting the women attend this school because they were not white. On September 20, 1952, the women were told that there was a mistake and that they were not welcome at the school. When the community heard about what happened to them, two of the most well-known African American civil rights lawyers, Arthur Shores and Thurgood Marshall, reached out to the two women. Shores and Marshall began working with Lucy and Myers so they could hopefully attend school. The men wrote a letter to John Gallalee, president of the university, but Gallalee refused to allow the women to become students at his school.

After this disappointing news, Shores and Marshall decided to build a court case against the university. However, Marshall was working on another case that would help Lucy and Myers get approved to go to school. A year before Lucy and Myers were scheduled to go to court, Marshall and his team won the Brown v. The Board of Education of Topeka case. On May 17, 1954, the United States Supreme Court ended this case by deciding that segregation was illegal. This decision meant that it was also illegal for schools to stop students from attending because of their race. Thanks to this, Lucy and Myers took their case to the US District court and won the right to attend the University of Alabama.

Hoping to stop the two women from attending their school, the University of Alabama hired a private investigator to find out about their personal lives. The school found out that Myers was pregnant when she applied to the school. Since she got pregnant before she was married, the University of Alabama was able to stop her from attending because it was against their rules to have a baby before marriage. Lucy had to start attending the all-white school alone. The university leaders did not allow her to live on campus or eat in the cafeteria, but she was allowed to register for classes. On February 3, 1956 Lucy stepped on the campus for the first time. By her third day on campus, crowds of white people learned that she was attending the school. They chased her, while screaming and throwing things at her. She was taken home in a police car and by the end of that night, university officials voted to suspend Lucy.

Shores and Marshall helped Lucy build a lawsuit against the university because they believed the school helped the white mob by not having protection for her. Unfortunately, the lawyers could not prove that the university was connected to the mob, and the lawyers took back their statement. However, they were not able to take it back before the public found out. The University of Alabama responded by saying that Lucy was making up rumors about the school, and they expelled her. Even though she was not allowed to attend the school, her lawyers were still worried about her safety. Marshall welcomed Lucy to live in his home with him and his wife.

Thirty-two years later, Autherine Lucy was asked to speak to a history class at the University of Alabama. After her talk, the teachers wanted her to be allowed to come back to the school as a student. In April of 1988, the university sent Lucy a letter saying that she was no longer expelled. She began school in 1989 and graduated from the same school at the same time as her daughter Grazia. Her legacy continues, as the University of Alabama named a $25,000 scholarship after her, and her picture was put up at the university in 1992.