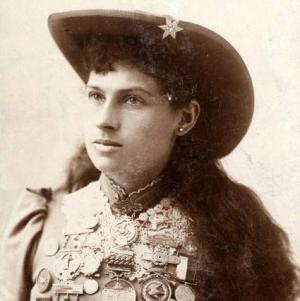 Annie Oakley is a famous markswoman known for her sharpshooting. During her lifetime she traveled with her husband across the country and abroad showing off her skills with a rifle. She became a star in a male-dominated sport, and legendary throughout the world.

Annie Oakley was born Phoebe Ann Moses on August 13, 1860 in Darke County, Ohio to Jacob Moses and Susan Wise Moses. When she was six years old, her father died from pneumonia, and her mother was left to care for her and her five siblings. Her mother remarried, but her second husband also died suddenly, leaving the family with a newborn baby. Because the family did not earn much money, they lived in a poor house, and Oakley who went by “Annie,” was sent to live with the Edington family. Oakley worked with the Edington family at the infirmary where she learned how to sew and helped with the younger children. She later stayed with an abusive family, whom she referred to as “the wolves.” At the age of eight, Oakley started hunting. She would sell the game she shot to local restaurants to help earn money for her family.

When she was fifteen, Oakley went to Cincinnati to compete against marksman Frank E. Butler. He travelled around the country challenging people to shooting competitions. During the competition, Oakley shot all twenty-five shots, and Butler missed one, making Oakley the winner. Butler was impressed by her skills, and soon they began courting. They were married August 23, 1876.

The happy couple toured around the country, and Butler continued to perform as a marksman. Oakley acted as his assistant and held up items for Butler to shoot. She would also do some shooting. As she became more popular, she adopted the stage name of “Oakley.” On May 1, 1882, Butler’s shooting partner became ill, and Oakley filled in. From that moment, Oakley became part of the act. In March 1884, she met Sitting Bull, the Lakota Sioux leader who defeated General Custer at the Battle of Little Bighorn. He gave her the nickname “Little Sure Shot” after seeing her perform in St. Paul, Minnesota.

After touring for a year with the Sells Brothers Circus, Butler and Oakley joined the Buffalo Bill’s Wild West Show. The couple performed as partners, but Oakley quickly rose to fame. Butler chose to support his wife and work as her assistant and manager. Oakley became the star of the show. She would shoot glass balls out of the air, shoot through playing cards, and shoot cigarettes out of her husband’s mouth. As the headliner of the show, Oakley chose to wear simple, modest clothes instead of flashy costumes, so they wouldn’t detract from her feats as a markswoman.

Butler and Oakley stayed with the Buffalo Bill’s Wild West Show for sixteen years. During these years, they traveled around the country and abroad. They performed for Queen Victoria’s Golden Jubilee in England. They also toured in Spain, Italy, and France. Over the course of her career, Oakley showed people around the world that women were capable and able to handle firearms and even out-shoot men. She encouraged women to learn how to use pistols that could be kept in purses in order to protect themselves. She was passionate about empowering women, and helping children.

After returning to the United States, Oakley and Butler began touring less and finally ended touring after a train wreck in 1901 which injured Oakley’s back. Two years later, Oakley found herself in a legal battle. It was reported in Chicago that she had been arrested for stealing a man’s trousers to sell them to buy cocaine. Other newspapers across the country also began to print the same story, however the report was entirely false. Oakley did not use drugs, nor did she steal anyone’s trousers. She and her husband were also living in New Jersey at the time, therefore she was nowhere near Chicago when the crime took place. It was discovered that the woman who was arrested was Maude Fontanella who used the false name “Any Oakley.” The real Annie Oakley was angered by the newspaper reports ruining her reputation, and she sued every paper that ran the false story. Over the course of seven years, Oakley successfully won 54 out of 55 cases against the newspapers.

In 1913, they moved to Cambridge, Maryland and then to Pinehurst, North Carolina in 1917. At the beginning of World War I, Oakley wrote to Secretary of War Henry L. Stimson and offered to fully fund and raise a regiment of women volunteers to fight during the war. She also offered to teach soldiers how to accurately shoot. Both her offers were not accepted.

In 1922, Oakley planned to begin touring again, however she and Butler were in a car accident which put her plans on hold. After a year of recovery, she returned to touring. Soon after, she became sick and in 1925, she moved back to Ohio to be closer to her family. Annie Oakley died November 3, 1926. Her beloved husband died three weeks later. They had been married for fifty years.

Annie Oakley is an iconic figure, especially for women interested in shooting sports. Her skills made her famous.She is remembered as the legendary frontwoman for Buffalo Bill’s Wild West Show, and an advocate for women to learn a sport that was primarily dominated by men.