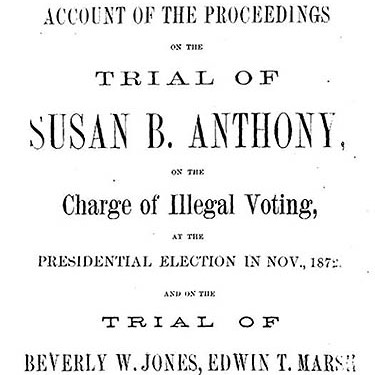 During election season, ads and peers bombard us to “get out there and vote.” But what about a time where you could get arrested for voting? 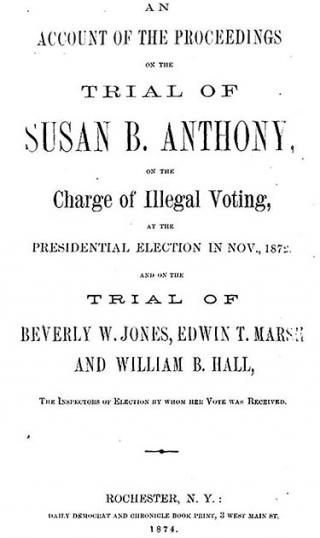 This was the case with Susan B. Anthony. Always one to champion the cause for women’s equality, Anthony registered to vote on November 1, 1872 for the upcoming election. This took place decades before the passing of the 19th Amendment (which officially granted women the right to vote). Several days later, on November 5th, Anthony voted and even remarked about her feat in a letter to Elizabeth Cady Stanton. On November 18th, only two weeks after casting her ballot, Anthony was arrested by a US Deputy Marshall for “illegally voting.”

Anthony capitalized on her upcoming trial and went on a local speaking tour where one of her main points was, “Is it a Crime for a Citizen of the United States to Vote?” She believed that under the 14th Amendment no state could bar natural-born citizens, which included to Anthony, the right to vote. In June of 1873, Anthony was brought to trial. She was not allowed to testify herself, as the judge barred her saying “she is not a competent as a witness on her own behalf.” Her lawyer, Judge Selden, argued for her case, citing the 14th Amendment and calling the arrest gender discrimination.

She lost the case and was sentenced a $100 fine (in addition to the costs of the persecution) to which she declared, “I shall never pay a dollar of your unjust penalty.” True to her words, Anthony never paid the fine for the rest of her life