Women Marines of World War I

The Navy was the first branch to allow women to serve after it was discovered that there was no reference to gender in the enlistment codes, only the word “persons.” On March 17, 1917, Loretta Perfectus Walsh became the first woman to join the navy and the first woman to officially join the military as anything other than a nurse. By the end of the war, about 12,500 women had served in the Navy. The Army, however, had strict gender guidelines and women could only serve in clerical or nursing capacities but were not official military. The Marines soon realized that allowing women to serve in clerical roles would free up able bodied men who were desperately needed on the front lines.

In 1918, the Marine Corps began investigating how the integration of women would take place. Early investigations found that about 40% of male office positions could be filled by women. This was not a one-to-one replacement, however. It was decided that for every two men, three women would be needed. It was assumed that women did not have the ability or fortitude to complete the same amount of work in the same amount of time as the men. This was quickly proven wrong.

On August 12, 1918, the Marines announced the creation of the Marine Corps Women’s Reserve and that they were looking for physically and mentally strong women with a background in stenography. The following day, thousands of women lined up in an attempt to join the elite Corps. The first woman to enlist was Opha Johnson, age 40. Johnson was already working at Headquarters Marine Corps as a civilian so the transition to military personnel was simple. By the end the war, Johnson was the most senior enlisted woman in the Marines with a rank of sergeant. 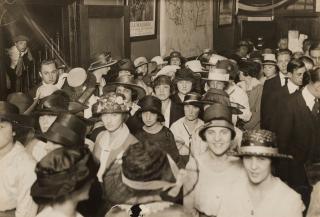 Women in line in New York waiting to apply for enlistment into the Marine Corps.

The Marines were very stringent in their selection process. The women were often referred to as the “100% Girls” because they had to be perfect in every respect. In addition to three letters of recommendation, an interview, and a medical exam, the women were also tested on stenography and clerical skills. The tests were so rigorous that out of the thousands of applicants, only 305 women were chosen to become Marine Reservists (F).

“Applicants were interviewed by one officer and finally given a stenographic test. Colonel McLemore conducted the shorthand test and dictated so fast, that one after another left the room. Those who remained were taken, one-by-one, into Colonel McLemore’s office and told to read back their notes… If the Colonel was satisfied with our reading, we were required to type our notes and timed for speed and accuracy. More and more applicants dropped by the wayside, until only five of us were left.” – Private First-Class Florence Gertler, secretary to Assistant Adjutant and Inspector, Captain France C. Cushing

Despite the demanding entrance exams, every woman accepted into the Marine Corps was given the same pay as men of equal rank. This was at a time when few women worked outside the home, and none could vote. Throughout their service many nicknames followed them. In addition to the “100% Girls” they were also called “Skirt Marines,” “Marinettes,” and “Lady Hell Cats,” but they were always treated with respect for the sake of their uniform. 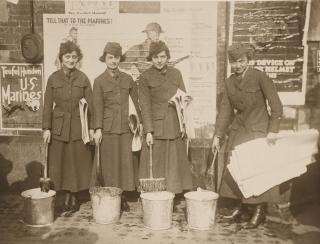 Ninette Gaby, May English, Lillian Patterson, and Theresa Lake putting up recruitment posters for the Marines.

The women faced many obstacles as Marines, not the least of which was their uniform. The uniform was hastily designed but slow in arriving. Female Marines in more rural parts of the country received no uniform at all and, instead, resorted to making their own. A dress uniform was never designed for the female Marines. In fact, there was no official dress uniform for women until 1950, over 30 years after the first women were inducted into the corps.

Finding a place to live also posed a challenge to these new Marines. There was no space on bases in northern Virginia or Washington, DC where most of the women were stationed. While the women were provided with a housing stipend, there was a housing shortage and many of the women were left to find places on their own. Spaces they could find normally consisted of a small, expensive bedroom without a private bathroom or access to a kitchen. Often these rooms were far away from fellow women Marines who provided friendship and comfort during many of the women’s first time away from home. Abby Aldrich Rockefeller, wife of John D. Rockefeller, Jr., heard about the struggle the women were having and found about 70 women lodging in newly built dormitories at Georgetown Preparatory School complete with a cook who provided meals. This provided food was essential for many Marines. With rationing and food shortages during the war, many women had a difficult time finding open restaurants and places to eat throughout the day. 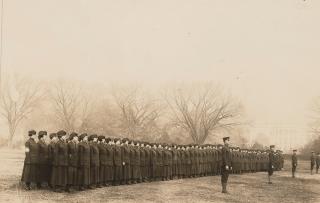 Following the armistice on November 11, 1918, an order was put out to immediately begin discharging the female Marines from active duty service. Some stayed on as reservists to finish out the four years they initially signed up for. Others received their honorable discharge and returned to their pre-war lives. The Marines no longer actively recruited women after the end of World War I. In February 1943, during the height of World War II, the Marine Corps Women Reserve was reestablished. Two women who had served as enlisted Marines during World War I, rejoined the Marines during World War II, this time as officers. Through the years, tens of thousands of women have served in the Marines. Just this year, the first female Marines joined infantry combat units to fight on the front lines. While every Marine has a different experience, and a different reason for joining, all female Marines can look back with pride on the women who bravely volunteered for this elite corps during war time. Although they never left the country and few held a gun, these women who served almost 100 years ago forged a path into the military that women had previously only dreamed of.

“World War I: Women and the War.” Women in Military Service for America Memorial.

Unlike the other women’s auxiliaries, WACs served in all theatres of the war, dispelling the notion that women were unfit for combat conditions.
READ MORE
Lesson Plan

Helen Keller is one of the most misinterpreted women of the early 20th century. This jigsaw lesson seeks to shine light on her labor activism and social justice, peace, and women’s reproductive rights.
READ MORE
Exhibit

From its early iteration as a lifesaving organization the Coast Guard saw many women serve as rescue boat operators for stranded sailors and keepers of lighthouse lamps.
READ MORE
.