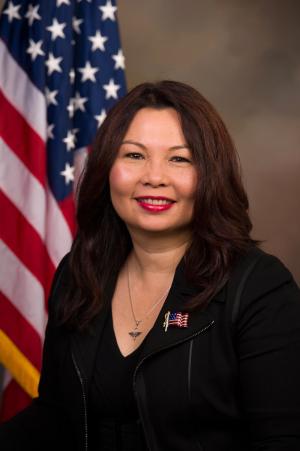 As one of the first female veterans elected to the Senate, Senator Ladda Tammy Duckworth has been a tireless advocate for veterans and new mothers. A Purple Heart recipient, Senator Duckworth has never let her use of a wheelchair slow her down.

Ladda Tammy Duckworth was born on March 12, 1968 in Bangkok, Thailand to an American father and a Thai mother of Chinese descent. Her father, Franklin, a Vietnam veteran and U.S. Marine, left his first marriage to marry her mother, Lamai, who was a shopkeeper. He moved the family around Asia in pursuit of well-paying jobs, and Duckworth spent most of her childhood in Indonesia. The family also lived in Singapore, Cambodia, and Vietnam while her father worked with the United Nations development programs. As the family moved around, Duckworth experienced discrimination and attacks for being “Amerasian” in a post-Vietnam War world. In April 1975, Duckworth had her first experience of war when she and her family crouched below the windows of an airport in Phnom Penh, Cambodia to avoid flying bullets. They boarded the last commercial flight out of the city.

Her father’s search for well-paying jobs in Southeast Asia was ultimately unsuccessful. Duckworth, her father, and her younger brother moved to Honolulu, Hawaii nearly penniless. Her mother stayed behind until the family could afford a fourth ticket. After another tough break, Duckworth took control, becoming the main breadwinner and managing the family’s food stamps.  At 16, Duckworth began to work a series of low-paying jobs to support her family and save them from homelessness. She worked long hours on Waikiki Beach after school selling roses out of a plastic bucket, handing out fliers, and encouraging tourists to try out local volleyball courts. Duckworth recalled “I never worked as hard as when we were at our poorest … so I felt if we could end up there, anyone could.”

After graduating high school, Duckworth went to the University of Hawaii. She worked  a series of minimum wage jobs and graduated with a B.A. in 1989. She then went to George Washington University (G.W.) in Washington, D.C. to pursue her M.A. in International Affairs. While at G.W., Duckworth joined the Reserve Officers Training Corps (ROTC) to save money as a graduate student. By the third week of training, she was hooked. She found herself drawn to flying helicopters because it was the job that would allow her to get as close to combat as a woman possibly could in the 1990s. She was the only woman in her helicopter training class and finished as the best in her class with the highest test scores. While in the ROTC, Duckworth also met her husband, Bryan Bowlsbey.

Duckworth graduated with her M.A. in 1992 and continued to rise through the military ranks. Duckworth and her husband moved to Illinois so she could start a Ph.D. in Political Science at Northern Illinois University. As she pursued her studies, she continued serving in the Reserve Forces. As a Captain in the Illinois National Guard, Duckworth was deployed during Operation Iraqi Freedom in 2004. With her deployment, she became one of the first handful of women to fly combat missions in Iraq.

On November 12, 2004, Duckworth’s Blackhawk helicopter was hit by an RPG (rocket propelled grenade). The grenade exploded in her lap, and her crew initially thought she was dead. Due to their determination and the work of the doctors at the army base, Duckworth survived. She lost both her legs and partial use of her right arm in the explosion. She received a Purple Heart for her sacrifice and service.

Duckworth arrived at Walter Reed Army Medical Center in Washington, D.C. in a coma due to her injuries. She woke up a week later and recovered at Walter Reed for 13 months. While still in recovery, she began advocating for her fellow Wounded Warriors. When Illinois Senator Dick Durbin called Walter Reed asking if any Illinois veterans wanted to attend the State of the Union, Duckworth accepted. Durbin told Duckworth to call him if there was anything he could do. She did, on behalf of other veterans who needed help with recovery, housing, or missing pension payments. She began using a wheelchair and a steel-and-titanium prosthetic on her right side.

After her recovery, Duckworth became Director of the Illinois Department of Veterans’ Affairs (VA). In this capacity, she implemented many first-in-the-nation programs to target the suffering of veterans. She also continued to serve as a Major in the National Guard. In 2009, she was selected by President Obama to be U.S. Assistant Secretary of Veterans Affairs. She headed the VA’s effort to end veteran homelessness and focused on programs for female veterans. After 23 years, Duckworth retired from the army at the rank of Lieutenant Colonel in 2014.

Duckworth  turned to political office to continue her advocacy. From 2013 to 2017, Duckworth served in the U.S. House of Representatives for Illinois’s 8th District. In 2016, she was elected to the Senate. In 2018, at age 50, she became the first Senator to give birth while serving in office and subsequently challenged the rules preventing infants on the Senate floor. Duckworth also co-founded the Senate Environmental Justice Caucus and has worked to pass legislation that makes traveling easier for new mothers and people with disabilities.

Beyond her work on the Senate floor, Duckworth is fluent in English, Thai, and Indonesian. She has competed in four marathons on a recumbent bike. Duckworth now has two daughters Duckworth is proud of her service and proud to be the first female amputee in the Senate. She says that when she looks at her prosthetic, she sees “strength” and “a reminder of where I am now.” She refuses to hide her wheelchair saying, “I earned this wheelchair. It’s no different from a medal I wear on my chest. Why would I hide it?”

Rebecca Johnson, “Senator Tammy Duckworth on the Attack That Took Her Legs—And Having a Baby at 50,” Vogue, September 12, 2018, https://www.vogue.com/article/tammy-duckworth-interview-vogue-october-2018-issue

Derek Kravitz, “The Dig: Yes, Tammy Duckworth’s Family Has Served in the Military for Centuries,” The Dig, Propublica.com, November 1, 2016, https://www.propublica.org/article/the-dig-tammy-duckworths-family-has-served-in-the-military-for-centuries