The First Woman Executed by the US Government

…the Commission do, therefore, sentence her, the said MARY E. SURRATT, to be hanged by the neck until she be dead, at such time and place as the President of the United States shall direct. 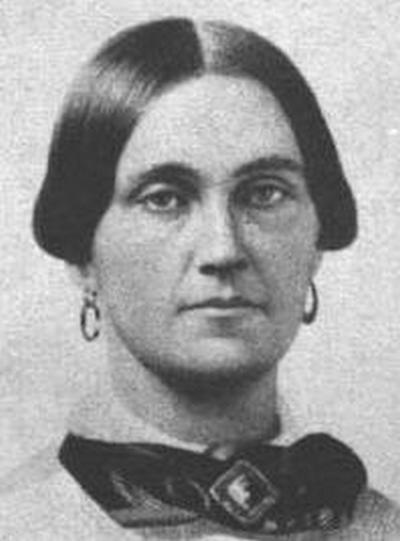 At 1:22pm on July 7, 1865, Mary Surratt became the first woman ever to be executed by the United States government. Surratt, Lewis Powell (aka Lewis Payne), David Herold, and George Atzerodt were all involved in John Wilkes Booth’s elaborate plot to completely disrupt the Union government by killing President Abraham Lincoln, Vice President Andrew Johnson, and Secretary of State William Seward. Atzerodt was supposed to kill Johnson, but he got cold feet and got drunk instead. Powell was supposed to kill Seward, but Seward survived his attack. Herold brought Powell to Seward’s home and helped Booth escape Washington, DC. Surratt, according to Johnson, “kept the nest that hatched the egg.” She, it was believed by many, was the center around which the whole plot evolved. After a month long trial and just two days of deliberation, all four were charged with conspiring to assassinate the President of the United States and were sentenced to hang for their crime. In June and early July of 1865, Mary Surratt was the most hated woman in the country and there was little doubt in Americans’ minds that she played a definite role in the assassination plot. For the almost 150 years since her death, though, public opinion has been somewhat divided.

For nearly her whole life, Mary Surratt lived just outside of Washington, DC in Prince George’s County, Maryland. She and her husband ran a successful tavern/hotel in the county and, in the early 1850s, the area surrounding the their business was named Surrattsville (now Clinton, Maryland). Maryland was a slave state and Surratts owned slaves whose labor they depended on to keep up their business. This was especially true when Surratt’s husband died and she was left to run things herself. As the North and South became more and more divided over the issue of slavery during the 1850s, the Surratts, like many of their Surrattsville neighbors, felt a growing allegiance to the southern way of life. Maryland did not secede from the Union like other southern slave states did in 1860 and 1861, leaving many families feeling stuck in a Union state with Confederate sympathies. When the Civil War broke out in 1861, the Surratts’ older son left Maryland to fight for the Confederacy and their younger son, John, became an informant who traveled to collect and deliver secret messages to the Confederate Army. During the Civil War, the Surratts’ views grew stronger. They became known as Confederate sympathizers and the Surrattsville tavern became known as a safe haven for people who held similar views. 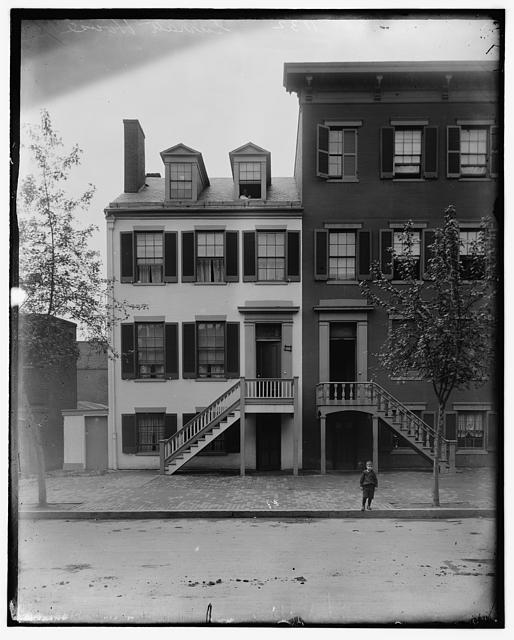 Because of the many debts her husband left her when he died, Surratt and her daughter, Anna, moved from Surrattsville to another property they owned in Washington, DC and began renting rooms out to boarders in 1864. It was during this time that John Surratt, who frequently stayed at his mother’s place when he was not running messages for the Confederate army, became acquainted with John Wilkes Booth, a famous actor and staunch supporter of the South. Booth soon became a regular visitor at the Surratt boarding house. John was an integral part in Booth’s original plan to hijack Lincoln’s carriage and hold the president hostage until he released Confederate POWs so the South’s dwindling army could be replenished and could continue fighting.When Booth’s kidnapping plan failed, he switched to the assassination plot. Because he was so involved in the kidnapping plan, authorities thought John was also one of the masterminds behind the assassination plan, even though he was in New York at the time. Newspapers printed photos and drawings of “The Conspirators” and included John’s image amongst the others. Mary Surratt also quickly became one of Booth’s closest confidants after being introduced to him by her son. The two often held private meetings together in her home, the topics of which are still to this day unknown. After Lincoln’s assassination, investigators found out about Surratt’s strong southern sympathies and the secret meetings between her and Booth, as well as the fact that other conspirators were seen coming to and from her house. The conspirators also had guns for the getaway hidden at the tavern she still owned in Surrattsville. Three days before the assassination, she rode to Surrattsville and told the man running her tavern to have the “shooting irons” ready as people will need them soon. She went back to Surrattsville early on the day of the assassination to remind the man to have them ready because someone will be there later that night to get them. Some of her boarders went to police telling them everything they knew about Surratt and the goings on at her house. With the mounting evidence against her, Mary Surratt was arrested and taken to prison – along with many others who acted at all suspicious in the hours and days following Lincoln’s death. She never asked why she was arrested and was uncooperative in answering questions about her involvement.

Eventually police narrowed the number of conspirators down to those they believed were actually involved and a trial was set to determine their guilt. The government decided to hold a military trial with no jury, instead of a civil trial. Surratt’s lawyers argued that trial by a military commission was illegal because the assassination took place in a time of peace (Lee surrendered five days earlier). Surratt and the other defendants were also not allowed to testify on their behalf (only Maine allowed criminal defendants to do that at the time). Surratt attracted the most media attention out of all those on trial, in part because she was a woman. Her alleged involvement in the conspiracy went against all contemporary notions of womanhood. Reporters commented on her physical appearance, what she wore, and how she acted in court.

On July 6, Surratts’s lawyers were sitting in their office awaiting the verdict when they heard a newsboy screaming, “The execution of Mrs. Surratt!” The media learned about the verdict and sentencing before it was even officially announced and they printed special edition broadsides to spread the news. She and the others would be executed the following day. Her lawyers could not believe it so they filed a writ of habeas corpus in an attempt to get her a civil trial, still arguing her military trial was illegal. In fact, most people, including the military judges who issued the guilty verdict, could not believe the United States government was going to execute a woman. Five of the nine judges who found her guilty signed a petition to get her sentence changed to life in prison “in consideration of her sex and age,” (she was 42 and considered an old lady) and delivered it to President Johnson, who had to approve the sentencing, along with the verdict. The petition did not work – Johnson claimed he never saw it, while one of the judges insisted he showed it to him. People, including Anna, rushed to the White House to try to save her life but Johnson refused to see anyone about the matter. The military prison where she was being kept was so sure they would not be executing her that they even stationed soldiers on the route between the prison and the White House so they could quickly relay the message that Johnson changed the sentence before she was brought to the gallows. Many believed the government was using Surratt’s death sentence as a way to get John, who was believed to have played a part in the plot, to turn himself in. They thought John would turn himself in to save his mother’s life, at which time Johnson would change the sentence. John did not come forward and no change was made, however, and a hysterical Mary Surratt spent her final night in prison with Anna (once she gave up on trying to see Johnson) and her spiritual advisers. Until the end, she maintained her innocence. The rest of the conspirators claimed she was just as guilty as they were, with the exception of Powell who, on the morning of the execution, said she was innocent after Anna and other Surratt supporters met with him. 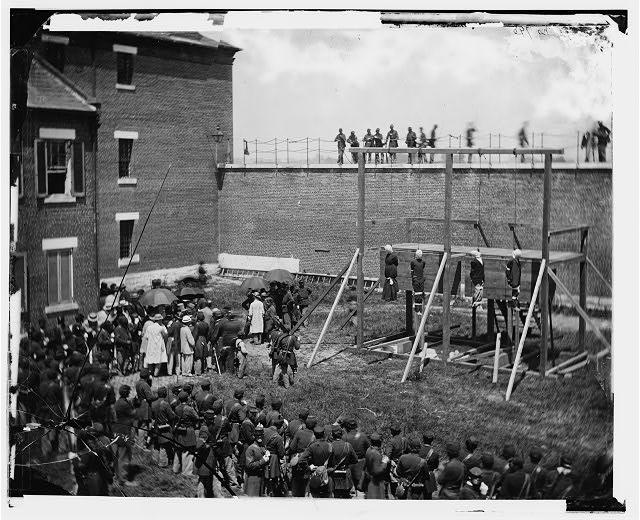 Around 1:00, Surratt, Powell, Herold, and Atzerodt were brought out to the gallows. Surratt walked out first and made her way to her assigned noose on the far right, as the right of the gallows was considered a more honorable spot to die. She was wearing a hat and veil to cover her face. Her priest stood between her and her noose to block her view of it. The hangman tied her arms behind her back as he did the men’s arms, but he was unsure of how to tie her legs together. Being that this was the first time he executed a woman, he did not know how to proceed in bounding the legs of someone wearing a dress. He eventually decided to bound her legs on top of the fabric. When Surratt’s hat and veil were taken off so they could put the noose around her neck, the crowd became visibly unsettled. They were actually going to hang a woman. Before moving to stand on the trap door where she would fall to her death, she said, “I wish to say to the people that I am innocent.” She died immediately. The bodies were all cut down 20 minutes later and placed in their pre-dug graves.

As soon as Surratt died, public opinion about her shifted greatly. People were outraged by her death. Days before, she was considered an evil woman who helped plan the assassination of the president. Suddenly after the hanging, she was a victim as it was inconceivable that a woman could commit such a crime. Southerners especially felt there was an injustice done. When John was caught in 1867, the anger over Surratt’s death allowed him to have the privilege of a civil trial in front of a jury of his peers (it ended in a hung jury – no pun intended).