Before the Feminist Movement of the 1970s, There Were the Women of Penn ’64

Ms. magazine and the Woodstock music festival were still years in the future.  Betty Friedan published The Feminine Mystique only a year before we graduated. Yet, unbeknownst even to us, a small group of women in the University of Pennsylvania’s Class of 1964 was already in the vanguard of what ultimately became one of the largest cultural and economic revolutions in American History. But it would be a half-century before we became fully aware of shattering the then existing belief that the only roles in society for women were housewife/mother, secretary, teacher, or nurse. 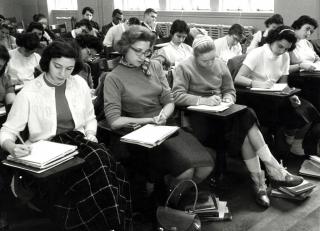 The women of the Penn graduating class of 1964 were smart, talented, and self-confident women who came from the tops of their high school classes. Many received University scholarships, mayoral and senatorial scholarships, and scholarships from outside organizations. Penn’s administrators told us during our initial orientation we were among the “best and the brightest.” What we were not advised was that once we got our degrees, we would be entering into a society not yet fully committed to accept us as equals in business, medicine or science. (No criticism of Penn intended; it’s difficult to analyze history when it is being made.)

This topic of women entering business early in the 1960s has only recently received general consumer interest because of the film Hidden Figures. In the past 50+ years, the phenomenon of women going from the typing pool to the boardroom has come about because of determined women like those of the Women of Penn ’64, who were resolved to “make it,” to “change the world,” despite a business environment not ready to accept women. This success came about because of its own kind of energy; there were no civil rights laws to help, and the Equal Rights Amendment had not yet been passed by Congress (even today it has been ratified by only 36 of the 38 states required for adoption).

The Women of Penn ’64 were pioneers; we didn’t know there was a glass ceiling as that term had not yet been invented. There were subtle fences and, for many, concrete walls to hurdle. Could anyone imagine when the Women of Penn ’64 were in college that some day there would be a woman president of General Motors or a woman CEO of DowDuPont? This was unheard of, but our determination to succeed was overwhelming.

Rona Solomon Cohen became a computer programmer who was challenged when several departments she headed at different companies were eliminated. She kept looking for the next opportunity and is now an entrepreneur. Susan Miller Hoffman, also a computer programmer, was ignored when she indicated an interest to be on IBM’s new point of sales (POS) team. She left the company when her son was born; she would have returned had she been on the POS team.

Eda Hochgelerent, MD, gave birth to her daughter later in life. Although her colleagues were thrilled for her and said they would cover her patients for a year, Emory University refused to allow Eda the one-year leave. She left and sued the University. Although the lawsuit took two years, Eda prevailed. Emory had to change its policies.

Marion Sokol Hubing and Sandra Lotz Fisher were forced to leave their posts when they were pregnant. Marion was able to return to her job at Sun Oil Company following the birth of her daughter. Sandra got creative and offered an alternative to be an outside-teacher, working with students on special projects. Her offer was accepted and her consulting career began. 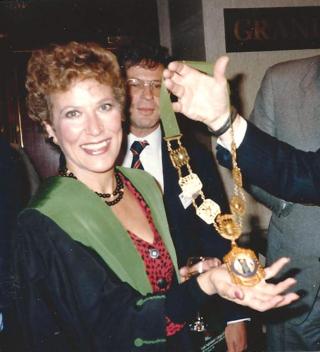 Faye Laing being inducted as an Honorary Fellow, Australasian College of Radiology, 1984

One of the National Women’s History Museum’s Women Making History Awards honoree in 2017, Faye Natanblut Laing, MD, our classmate, is included among the women featured in our book, On the Cusp: The Women of Penn ’64. Faye went to medical school at Columbia University in New York City after her graduation from Penn. Faye, a pioneer in ultrasound, says she had to learn the ultrasound machine on her own, after it was put in her office with no instruction book to follow.

Leslie Gallery-Dilworth, a soon to be architect, thought she should go to New York City to get her first job after graduation. While waiting for her interview, Leslie noticed the men going into one door, while women were called to another door. Leslie asked what that was all about. The receptionist responded that the left door was for men to enter the management training program. The right door was for secretaries. Leslie thought… “Not for me,” and said, “Thank you.” She left.

In an era when opportunities for women were severely limited, our classmates became doctors, architects, attorneys, computer programmers, not-for-profit leaders, and entrepreneurs. We became the role models; there were none for us to follow.

The 50+ years since our class graduated is hardly even a blip on the time scale of the universe. But the accomplishments of the Women of Penn ’64 are remarkable. The Women of Penn ’64 were pioneers. Before this class, if a woman went to Penn, for the most part it was to become a teacher or a nurse. There was very little else open if you were a woman.

So, it was with incredible self-confidence that these women did not major in teaching or nursing (although many of our classmates earned their teaching credits “just in case...”).

The Women of Penn ’64 tell how, individually and collectively, we broke down barriers in government, in healthcare, in law, in medicine and in business. We tell—in our own words—many of the challenges we faced.

This story of our 1964 classmates is a different type of narrative—the influences on our lives and how we influenced the lives of others. We are a collection of life stories with the unifying themes being Penn, our excellent education and the boost in self-confidence we received.

When you compare what the Women of Penn ’64 achieved with the positions women can achieve today, it's a whole different world. The accomplishments of the Class of 1964 are quite impressive.

Today’s young women will find it hard to believe the stories our classmates tell. There was no maternity leave; a woman was considered a liability working past five months of pregnancy, and a woman could not teach a class if she was “showing.” Women could not major in certain fields in college, and many companies had management training programs that were for “men only.” There were differences in salaries. In some organizations, salaries were so low that women could not afford to take the job; parents were expected to subsidize them. And there were no mentors or sponsors to speak of…we had to go it alone. Having to work around some of these factors could have turned us away from achievements in our careers, but we dealt with the challenges.

Women like us were making their way with virtually no precedent. It was the beginning of a movement that wasn't really called a movement at that time. Several of our classmates noted, in retrospect, “We were on the cusp of something great!”

The Women of Penn ’64 came out of the ’50s; they were not part of the movement of the ’70s. We were individuals who, through our own self determination and smarts achieved goals in our lives that went well beyond those of previous generations of women.

The archivist at University of Pennsylvania said, “Your class felt they could conquer the world.” 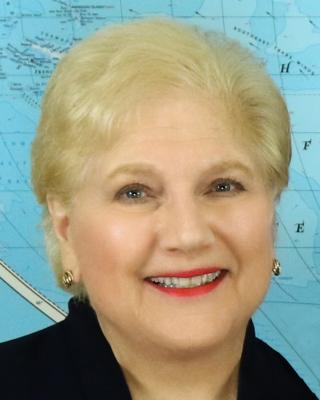 Anne Klein, co-author of On the Cusp: The Women of Penn '64

The co-authors of the book, “On the Cusp: The Women of Penn ’64” are Anne Sceia Klein (a graduate of Penn’s Wharton School ’64 and Annenberg School ’65) and Vilma Barr (a Drexel University and MIT graduate).

Poet and author Audre Lorde used her writing to shine light on her experience of the world as a Black lesbian woman and later, as a mother and person suffering from cancer.
READ MORE
Biography

The first openly transgender person elected to a state senate in the U.S., Sarah McBride won a seat in the Delaware Senate on November 3, 2020.
READ MORE
Biography

Lani Ka’ahumanu, a leader of the bisexual rights movement in the U.S., has worked for greater visibility for bisexuals both within the LGBTQ movement as well as broader society.
READ MORE
Article

Girls to the Front: How Young Women are Shaping Their Future

Girls to the Front: How Young Women are Shaping Their Future
READ MORE
.