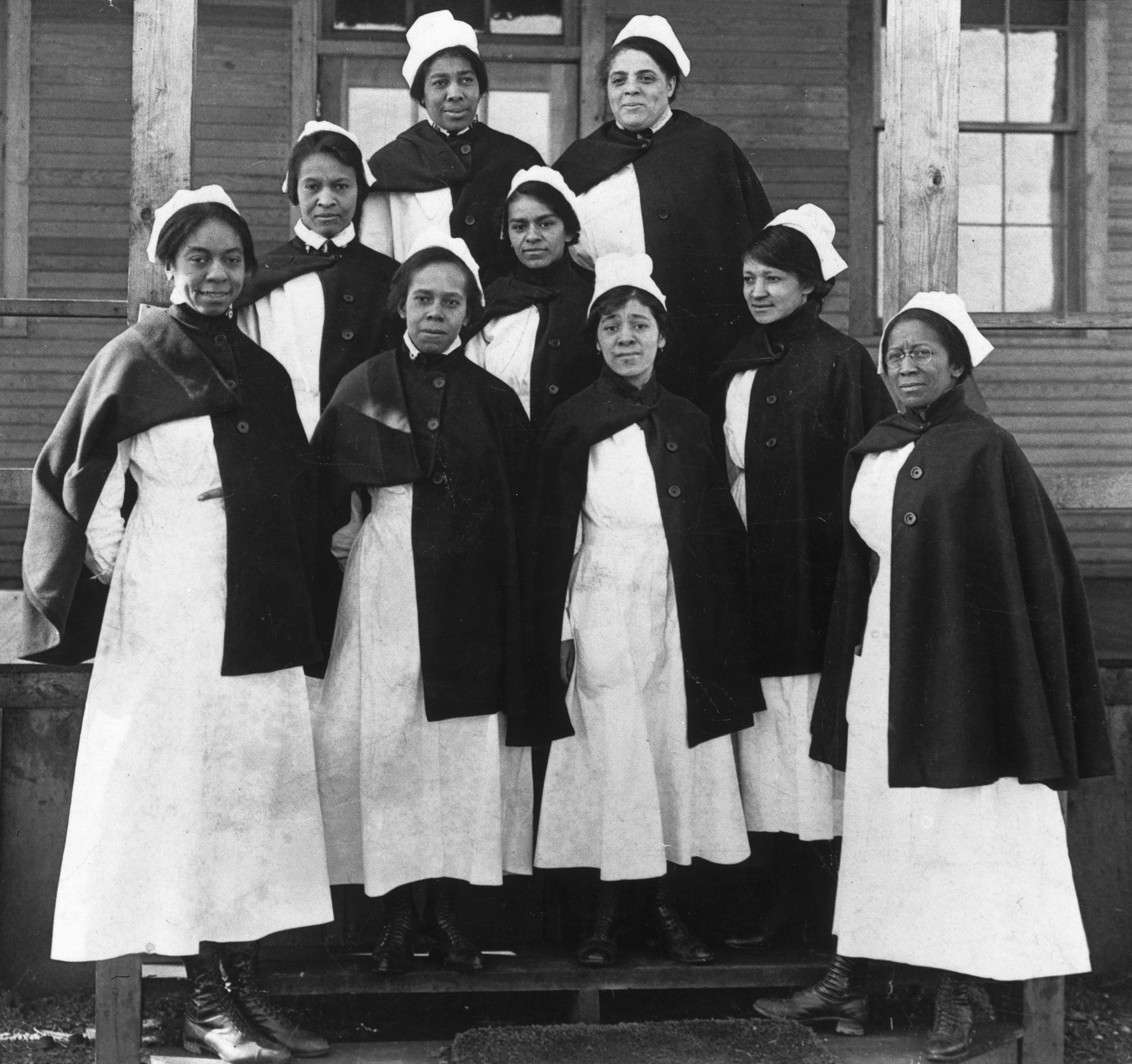 Throughout the history of the United States, African American nurses have served with courage and distinction. During the Civil War, black nurses, such as Sojourner Truth and Harriet Tubman, worked in Union hospitals caring for the sick and wounded. At the end of the nineteenth century, African American nurses served as contract nurses in the Army during the Spanish American War, helping to combat yellow fever and typhoid epidemics that overwhelmed the military. The performance of all nurses during this war led to the establishment of the Army Nurse Corps in February of 1901, but despite these accomplishments and achievements, African Americans continued to fight for acceptance as nurses both in civilian and military venues.

After the United States declared war on Germany in 1917, the American Red Cross expanded their recruitment campaign in an effort to meet the demand for military nurses that World War I required. Applicants to the Armed Forces Nurse Corps (managed by the American Red Cross) had to be between 25 and 35 years of age, unmarried, and graduates of hospital training schools with more than 50 beds. While there were no criteria that specifically banned black nurses, the requirement that nurses had to have completed their training at a hospital with more than 50 beds all but eliminated African American nurses, most of whom had graduated from small segregated hospital training schools.  Despite the increased recruitment, black nurses were refused entry into the Army and Navy nurse corps. As a result, hospitals were left with minimal nursing staff to meet the demand that would arise in 1918 during the flu epidemic. As the epidemic wore on and the demand for nurses continued to increase, the Army dropped its refusal to enlist black nurses and sent a troop of African American nurses to military camps in Ohio and Illinois. In 1941, with the United States’ entry into World War II all but inevitable, African American nurses lined up to serve their country, only to meet with the same roadblocks they had encountered more than twenty years before.

Although African American nurses were fully qualified and prepared to serve as nurses at the onset of World War II, racial segregation and discrimination made it difficult for black women to join the ranks of the Army Nurse Corps (ANC). As the ANC began expanding its recruiting process, thousands of black nurses who wanted to serve their country filled out applications. All received a letter telling them that their application would not be considered because the Army did not have regulations in place for the appointment of black nurses. Mabel Staupers, the executive secretary of the National Association of Colored Graduate Nurses, began lobbying for a change in the discriminatory policies of the ANC. While the Army did eventually comply in 1941, it did so unwillingly and placed a quota on the number of African American nurses that they would accept, capping the number allowed to join at fifty-six. As the war progressed, the number of black nurses allowed to enlist remained low, although the quota was officially lifted in July 1944.

April 1941, forty-eight African American nurses were assigned to camps. Allowed only to care for African American servicemen, these forty-eight nurses were assigned to segregated hospital wards on Army bases located at Camp Livingston, Louisiana and Fort Bragg, North Carolina. Della Raney Jackson, a graduate of Lincoln Hospital School of Nursing in Durham, North Carolina, was assigned to lead the nurses at Fort Bragg and became the first black nurse to be commissioned in the U.S. Army.

Though black nurses were largely restricted to serving only in segregated hospitals and aid stations, they also provided medical care for German prisoners of war at places such as Camp Florence, Arizona in the United States, as well as in England. Many African American nurses considered caring for German POWs to be a second-rate assignment, and they found interacting with the Nation’s enemy to be deeply troubling. It had taken decades for black nurses to be admitted into the Army Nurse Corps, and it felt like a betrayal to be assigned to care for enemy soldiers instead of wounded American soldiers. Moreover, as most prisoners were in good health when they arrived, these nurses were not utilized to their full potential. Life for a black army nurse at POW camps in the South and Southwest United States was particularly lonely and isolating as they were forced to eat in segregated dining halls, regularly left out of officer meetings and social functions, and refused service at restaurants and businesses in town.

In the last year of World War II, with the casualty rate of American servicemen rising rapidly, the demand for nurses also rose. President Roosevelt, in his State of the Union Address in January of 1945, announced plans to establish a nursing draft. Ignoring the 9,000 applications that the Army Nurse Corps had received from African American nurses, President Roosevelt declared that the draft would be instituted unless 18,000 additional nurses volunteered for service. An outcry arose among the National Association of Colored Graduate Nurses and civil rights organizations. Congressman Adam Clayton Powell, Jr., the first African American to be elected to congress from New York, also denounced the decision:

It is absolutely unbelievable that in times like these, when the world is going forward, that there are leaders in our American life who are going backward. It is further unbelievable that these leaders have become so blindly and unreasonably un-American that they have forced our wounded men to face the tragedy of death rather than allow trained nurses to aid because these nurses’ skins happen to be of a different color.

The legislation ultimately died in the Senate and was never passed.

By the end of the war, approximately 500 African American nurses held commissions compared to 59,000 white nurses, accounting for just 0.8% of the Army Nurse Corps. Despite the racial segregation and discrimination that African American nurses experienced, they fought for their place within the Army Nurse Corps and earned their right to serve their country. On July 26th, 1948, President Truman signed Executive Order 9981, establishing the President’s Committee on Equality of Treatment and Opportunity in the Armed Services, requiring the government to integrate the then segregated military. Executive Order 9981 stated that “there shall be equality of treatment and opportunity for all persons in the armed forces without regard to race, color, religion, or national origin.” For many, including the African American nurses that had struggled to serve their country during World War I and World War II, the legislation was long overdue.

In 2019, just over seventy years after President Truman signed the order to desegregate the military, African American nurses make up approximately 17 percent of the Army Nurse Corps. In December of 2015, Lt. General Nadja West was the first African American, man or woman, appointed as the U.S. Army Surgeon General, making her the first female lieutenant general and the highest-ranking female graduate of the U.S. Military Academy.

Francis Perkins and the New Deal

Journalist and poet Asieh Amini is a leading voice in the campaign to end stoning and juvenile executions in Iran.
READ MORE
.