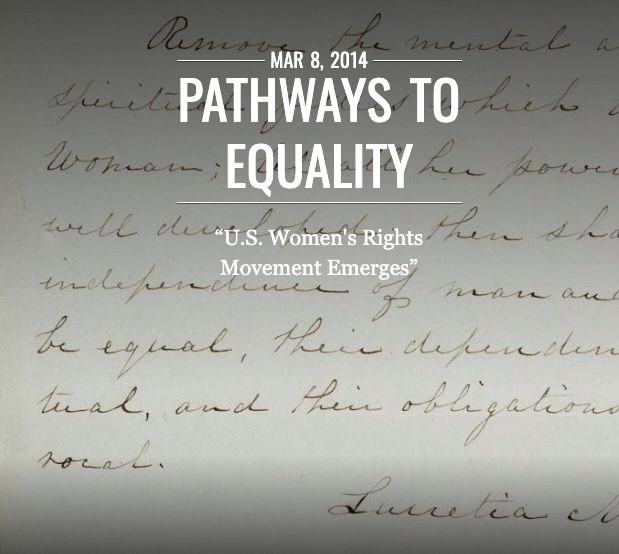 A new group of women reformers emerged in nineteenth-century America. These educated women set out to solve social and economic problems caused by injustice and inequity. They discovered that without political power, they could not effect the changes necessary to fulfill the American promise. Gradually these women from different perspectives arrived at the same conclusion: in order to solve problems. women needed a political identity. They needed the vote. 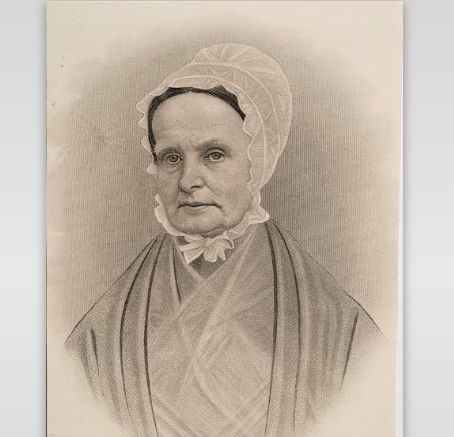 Lucretia Mott, who was a Quaker, believed slavery was evil, and she traveled the country to preach against it. Her transition into a women's rights advocate was complete after she was refused a seat at the 1840 World's Anti-Slavery Convention because of her gender. Undaunted by injustice, she and Elizabeth Cady Stanton formed a decades-long collaboration that established a direction and tone for the the fight for women's suffrage. 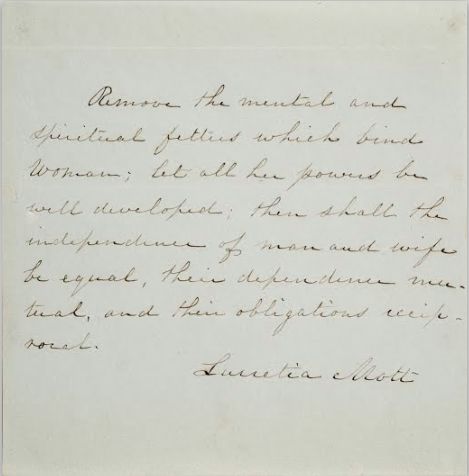 As a young teacher, Mott was struck by the unfairness of women receiving half the pay of male teachers. In this manuscript, Mott argues for women’s equality within the family and society. 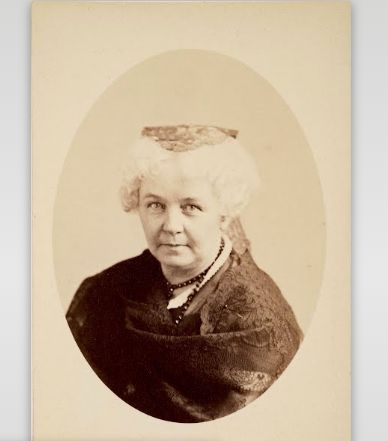 Elizabeth Cady Stanton formulated an agenda for the women’s rights movement that continues to be relevant today. Her “Declaration of Sentiments” demanded a complete revision of women's status in society, including access to education, legal standing, political power, and economic autonomy. Women’s right to vote was fundamental to her vision. Her intellectual and organizational partnership with Susan B. Anthony dominated the women’s movement for over half a century. 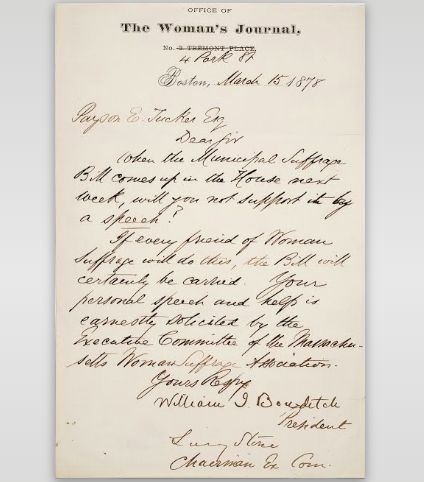 Lucy Stone learned as child that women’s opportunities were different than those of men. She grew up in a large family that enforced rigid gender roles and discouraged her from an education. Challenging conformity, Stone worked part-time to support herself as a student at Oberlin College, the first co-educational institution in the country. In spite of its progressive ideals, Oberlin did not allow female students to participate in the debating society. Stone and her fellow female students formed a secret society, meeting at night to practice oration. Shortly after graduation, Stone secured a paid position as a lecturer for the American Anti-Slavery Association. She became nationally known as a powerful speaker for African American and women’s rights. In 1850, Stone led the way in convening the first National Women’s Rights Convention. She and her husband, Henry Blackwell, founded The Woman’s Journal newspaper in 1869, which gained the reputation as the “voice of the woman’s movement.”

“We ask only for justice and equal rights—the right to vote, the right to our own earnings, equality before the law”
- Lucy Stone

For Lucy Stone, the path to suffrage was enactment by state legislatures. In this letter, Stone appeals to Payson E. Tucker, of the Massachusetts House of Representatives, to support women’s suffrage. 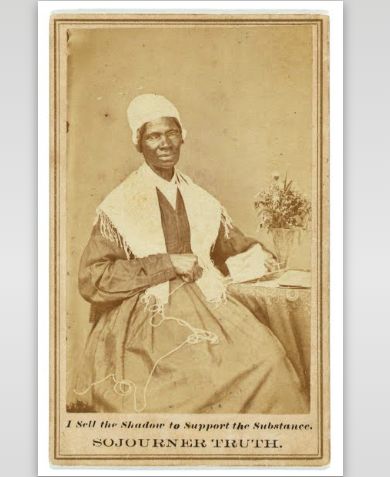 Abolitionist, women’s rights activist, and former slave Sojourner Truth (born Isabella) joined the religious revivals occurring in New York State in the early 19th century and became a powerful and charismatic speaker. In 1843, she had a spiritual breakthrough and declared that the Spirit called on her to preach the truth and gave her a new name, Sojourner Truth. Truth’s journey brought her in contact with abolitionists William Lloyd Garrison and Frederick Douglas, and she gained exposure to women’s rights activists like Lucretia Mott and Elizabeth Cady Stanton. In 1851, Truth went on a nation-wide lecture tour and gave her most famous speech, “Ain’t I a Woman?” at a woman’s rights conference in Akron, Ohio, where all of the other speakers were men. In her speech, she criticized the idea of women being the “weaker sex” and urged men not to fear rights for women. It became a classic speech of the women's rights movement. 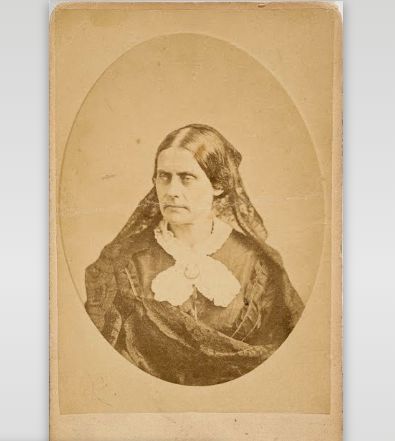 Susan B. Anthony campaigned for all-encompassing social change. Her first cause was temperance, but because of her gender, she was not allowed to speak at rallies. Her experiences convinced her that the only way for women to influence public affairs was through the vote. Her strengths were discipline, energy, and organization, and she traveled the U.S. to persuade people to support her causes. Her radical approach included courting arrest for illegally casting a ballot. In 1869 she founded the National Woman Suffrage Association, the radical wing of the suffrage movement that pushed for a constitutional amendment. She remained active in the woman's movement until her death in 1906, fourteen years before the 19th Amendment’s passage. 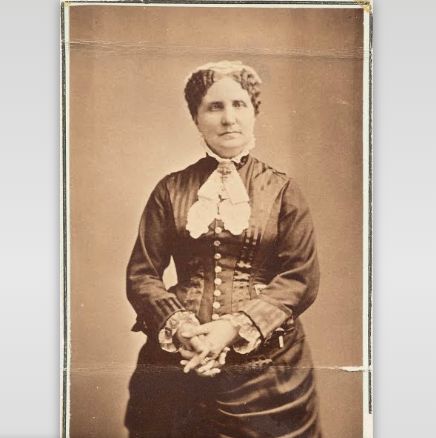 Journalist, abolitionist, and women’s rights activist Mary Livermore became a member of the early abolitionist movement after a first-hand experience as a governess on a slave-holding, Virginia plantation. When the Civil War began, Livermore volunteered with the Chicago Sanitary Commission, raising funds to support medical care and services for Union soldiers. Livermore organized the Sanitary Fair of October 1863, which raised an astonishing $70,000 in a few weeks. Livermore’s female volunteers saved the lives of thousands of men who would have died without their vital supplies. Convinced of the need for women's suffrage as a prerequisite for important social reforms, Livermore became the founding president of the Illinois Suffrage Association in 1868, and in 1869, she helped to form the American Woman Suffrage Association. 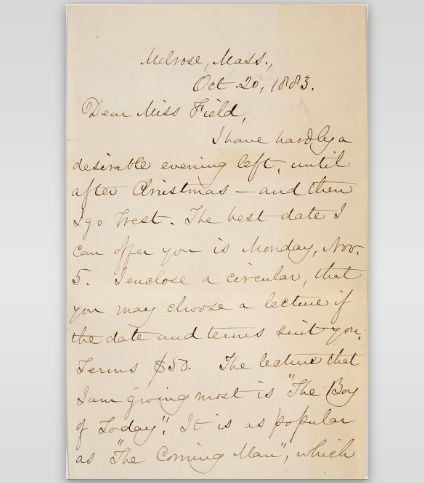 A talented and persuasive orator, Mary Livermore made an excellent living on the 19th-century lyceum circuit for more than 20 years. Livermore often couched her appeals in terms of women’s special responsibilities as caregivers at home and to the nation. In the speech “The Boy of To-Day” Livermore argues that mothers are crucial to shaping men of character:

“If the ranks of manly men can be increased among us, and then be supplemented by large numbers of womanly women. . . we need not fear for the future of the nation.” 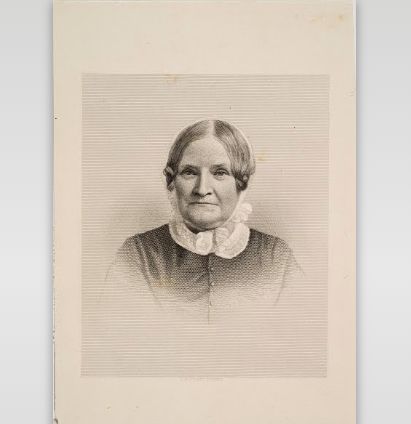 Lydia Maria Child advocated for the rights of marginalized groups. Influenced by her friend and fellow abolitionist, William Lloyd Garrison, Child’s popular novels challenged social and cultural paradigms of male dominance and white supremacy, something that often drew controversy and damaged her literary career. Her acclaimed anti-slavery tract, “Correspondence between Lydia Maria Child and Gov. Wise and Mrs. Mason of Virginia”, argued that compromise over the slavery issue was not possible between the North and South. Child eventually broke from the women’s movement over the question of the 15th Amendment, which granted black male suffrage with no mention of the same for women. She believed that women’s suffrage would follow African American men’s. 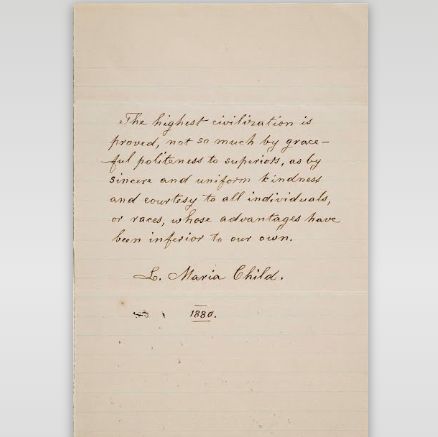 Lydia Maria Child calls for a more civil society and discourse in this sentiment. 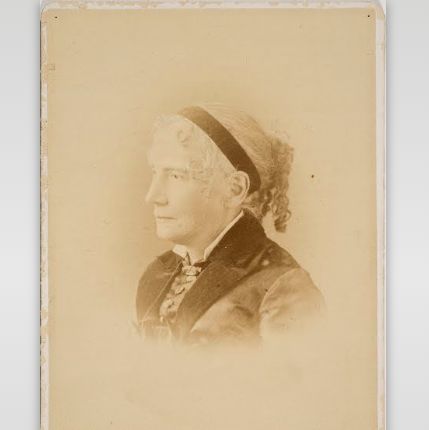 Harriet Beecher Stowe made her living by writing on a range of subjects from homemaking to religion, and she staunchly opposed slavery. After the passage of the Fugitive Slave Act in 1850, which required that runaway slaves to be returned to their masters upon capture, she took a public stand against the institution when she published her famous anti-slavery novel, Uncle Tom’s Cabin, in 1852. The novel realistically portrayed slavery and helped to galvanize the abolitionist cause in the 1850s, intensifying the conflict between the North and the South, which led to the Civil War. 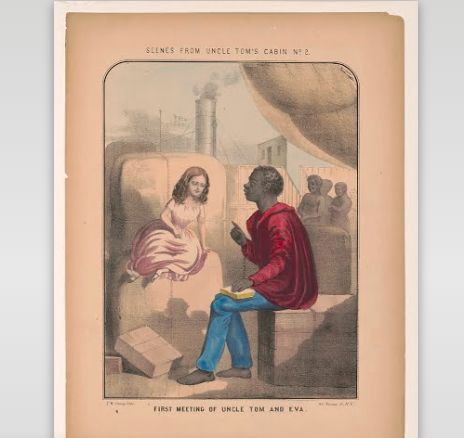 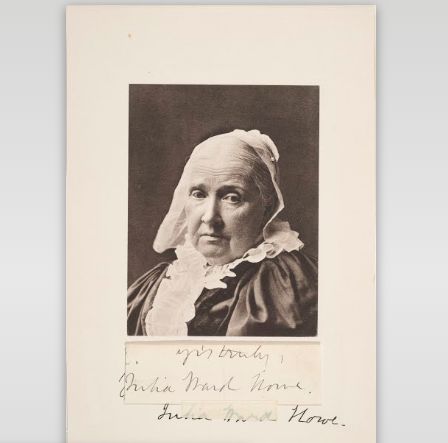 Though best known today for writing the Civil War anthem, “Battle Hymn of the Republic,” Julia Ward Howe was a well-known literary figure in her time. Ward Howe envisioned a literary career from youth, and struggled within the confines of a difficult marriage to accomplish her goals. Her husband, Samuel Gridley Howe, objected to his wife’s publishing, adding tension to their relationship. The couple shared a strong abolitionist point-of-view, and they co-edited a short-lived anti-slavery newspaper. Though they both advocated for abolitionist causes, they grew progressively distant. Ward Howe became increasingly active in the women’s suffrage movement as her national reputation grew, joining Lucy Stone’s The Woman’s Journal as an editor and co-founding the American Woman Suffrage Association. Ida B. Wells-Barnett challenged racial and gender discrimination through the power of the pen. In 1887, she bought part-ownership in a newspaper and later was the sole proprietor of “Memphis Free Speech,” where she created an editorial voice of resistance that railed against racial discrimination of African Americans. Using the pen name “Iola,” she led a crusade against lynching and other horrific injustices. Her work in the women’s rights movement included founding the first black woman suffrage organization – the Alpha Suffrage Club of Chicago in 1913. The organization worked exclusively to gain suffrage for women. 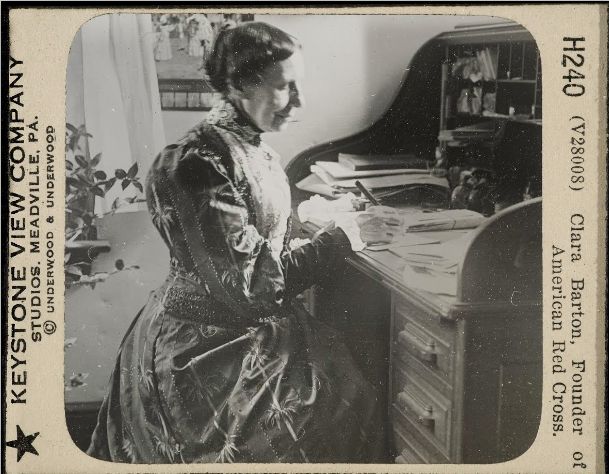 Clara Barton began her lifelong commitment to aiding the ill and wounded as a young girl. Throughout her life, Barton viewed social reform as a necessity and her service during the Civil War provided a public space to herald women’s rights, rights for African Americans, and later, women's suffrage. Following her time as a Civil War nurse aiding wounded soldiers on both sides of the conflict, Barton saw a need for disaster relief response in the U.S. and founded the American Red Cross in 1881. 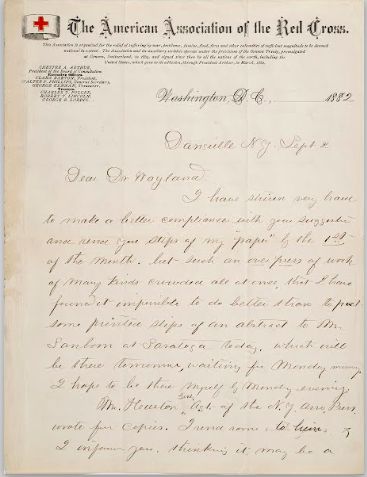 Following the Civil War, Barton worked with the International Red Cross to provide aid during the Franco-Prussian War. Exhausted by her experience, Barton recuperated at Dr. Jackson’s health institute in Dansville, New York. Barton repeatedly returned to Dansville for rest and relaxation over the next decade. Dansville citizens chartered the first local chapter of the American Red Cross on August 22, 1881, a year before this letter was written. 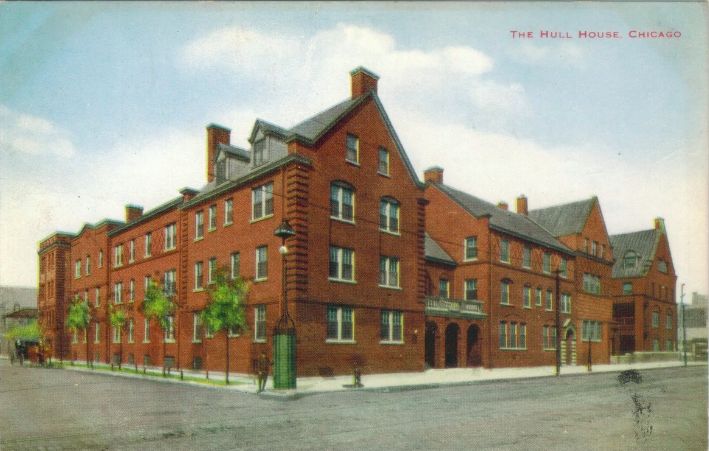 Jane Addams was one of the most prominent reformers during the Progressive Era of American history. In 1889, she co-founded Chicago's Hull-House, a home and gathering place for reformers who “settled” in the neighborhoods they served, and provided social services to immigrants and the urban poor. A suffrage supporter, Addams became Vice President of the NAWSA in 1911, and wrote and spoke widely about the importance of suffrage, including her paper “Why Women Should Vote.” The legacy of Addam’s work continues to influence social, political and economic reform in the U.S. 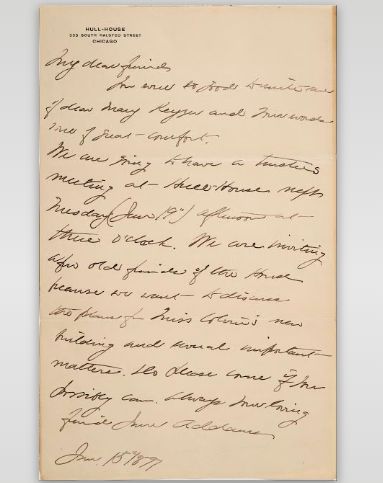 Jane Addams, with her friend Ellen Gates Starr, founded Hull-House Settlement as a place for impoverished, recent immigrants to gather for education and fellowship with the goal of integrating them into American society. The Miss Culver referenced in this letter is Helen Culver, Hull-House’s original and on-going benefactor. Culver managed and later inherited her cousin’s, Charles Hull, real estate investment firm. She granted Hull-House the original lease and facilitated its expansion into what became a 13-building complex.

From an exhibit curated by Jeanne and Robert Schramm