Challenges to the Ballot 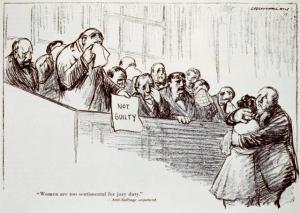 Following Seneca Falls there were significant divisions amongst suffragists, notably over the 15th Amendment which excluded women from voting and the use of racially divisive tactics by the National Woman Suffrage Association. In addition, there were multifaceted and nuanced ways in which suffragists were challenged, both by men and women, in their efforts to win the ballot. In this lesson, students will examine suffrage not just as an issue colored by gender, but by immigration status, race, and myriad other factors based on a close read of primary sources produced by those opposed to suffrage. This lesson will serve as an introduction to the concept of intersectionality and used as a lens to understand the world.

One to two 45 minute class periods

1. Students will create and test their own hypotheses for why some Americans opposed the 19th Amendment.

2. Students, based on their close examination of primary sources, will determine why some Americans opposed the 19th Amendment

3. Students will produce a short response, based on what they have learned in class, to explain why opposition to the 19th Amendment existed, and assess the validity of their arguments.

Students should be introduced to female suffragist leaders, their arguments for suffrage, and the efforts of NAWSA (National American Woman Suffrage Association). Students should also be familiar with the significance of Seneca Falls and the divisions within the suffrage movement.

Based on what you learned today in your exploration of primary sources regarding opponents to suffrage as well as class discussion, juxtapose your hypotheses with what we have learned. What is similar? What is different? How does this relate to intersectionality?

You will incorporate one 19th or 20th century anti-suffrage song or political cartoon into your response. I recommend using the Library of Congress or National Archives for cartoons, and YouTube for music. Generally, a Google search can be fruitful as well, as long as you consider the reliability of your sources.