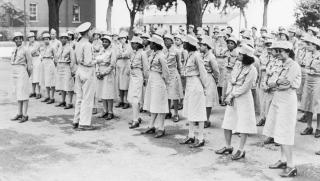 Before the United States entered World War II, it started preparing for conflict. In preparation for war, Eleanor Roosevelt began advocating for women to have a greater role in the military. Prior to WWII, many were not willing to allow women into the forces. Thousands of women had worked as nurses in the Army, Marines, and Navy nursing corps during WWI, but they had not fought. In May 1941, Congresswoman Edith Nourse Rogers of Massachusetts introduced a bill to create a women’s auxiliary army. However, it took Congress a full year to approve the measure. The bill gave women the option to volunteer for women’s units attached to the military, but women were not drafted. The goal of including women in the military was to fill non-combat roles, which would free up men for combat. Women worked in a wide variety of jobs including cook, secretary, and mechanic. 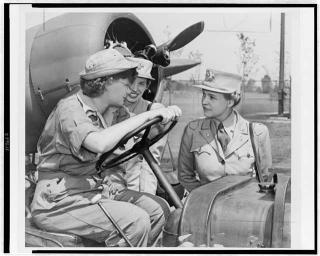 In May 1942, the Women’s Auxiliary Army Corps (WAAC) was created and attached to, but not integrated into the Army. Oveta Culp Hobby was appointed director of the WAAC. In 1943, the name changed to the Women’s Army Corps (WAC), when the group was given full military status. Other branches of the military quickly followed suit. The Navy formed the Women Accepted for Volunteer Emergency Service (WAVES) in July 1942. The Marine Corps Women’s Reserves was also formed in July 1942, although it would take months before woman were able to join. The Coast Guard created the SPARs in February 1943, which was short for their motto “Semper Paratus”, meaning “Always Ready”. The Air Force, was still part of the army, did not accept women into its ranks. Instead civilian women were employed to fly planes from production plants to bases in the US. These women were not given military status in wartime, but President Jimmy Carter recognized their military status in 1977. 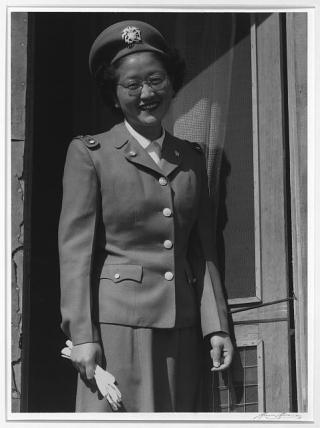 Each of the women’s groups had different entry requirements. The WAVES, for example, only accepted women between 20 and 36 years old, while the WAC allowed women to enlist up to the age of 50. Although women were given new opportunities and filled over 200 different kinds of non-combat roles, there was still segregation and racism in the groups. Initially, the WAC was the only women’s organization that allowed African American women to serve. However, the number of black women given places in the WAC was limited to a 10% quota. This cap was set by the military to reflect the proportion of black civilians to the total US population. Once African American women gained entrance to the WAC, they often faced discrimination. Japanese American women also faced discrimination. They were barred from serving with the WAC until November 1943 and the navy banned them from serving during wartime. Many other ethnic groups also volunteered for the forces including Native American and Chinese American women.

Women, whatever their ethnic background, often had to fight negative portrayals of their involvement in the military. Many people questioned the women’s character and morality. As a result, women were urged by military officials to maintain their “feminine” appearance by wearing makeup and nail polish. 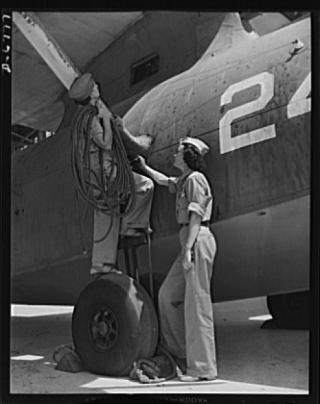 The WAC was the only branch of the women’s military that was allowed to send members overseas. As a result, WACs were involved in every theatre of war. When the war ended in 1945, the continued existence of women in the military was in question. In 1948, Congress passed the Women’s Armed Services Integration Act, which established women as a permanent part of the military. Today, World War II servicewomen’s contributions to the nation are remembered at the World War II Memorial and The Women in Military Service for America Memorial, both located in Washington, DC.

Putney, Martha S. When the Nation was in Need: Blacks in the Women's Army Corps During World War II. Lanham: Scarecrow Press, 1992.

The War Department. “It's Your War Too.” Director unknown. 1944. Distributor unknown. https://www.youtube.com/watch?v=enYgk47gQi8

In 1959, Lorraine Hansberry made history as the first African American woman to have a show produced on Broadway—A Raisin in the Sun.
READ MORE
Lesson Plan

Francis Perkins and the New Deal

Dr. Janet Yellen, confirmed in January 2021 as the first female Treasury Secretary of the United States, is no stranger to breaking glass ceilings.
READ MORE
.