Imagine showing up to your first day of school and being greeted by an angry mob and the National Guard. On September 4, 1957 nine African American students arrived at Central High School in Little Rock, Arkansas. They made their way through a crowd shouting obscenities and even throwing objects. Once the students reached the front door the National Guard prevented them from entering the school and were forced to go home. The students returned on September 29th. This time they were protected by federal troops. The students were able to enter the school, finally integrating Central High School. This group of students became known as the “Little Rock Nine.” 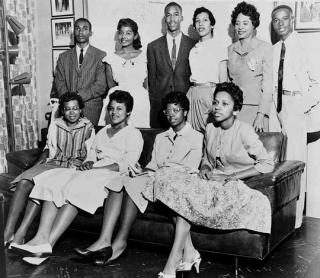 Many schools in the South refused to admit black students, even though the 1954 Brown v. Board of Education Supreme Court decision decreed school segregation unconstitutional. Despite resistance Civil Rights organizations worked to enroll black students in segregated schools. In Arkansas, the National Association for the Advancement of Colored People (NAACP) recruited young girls and boys to integrate schools. Daisy Bates was the president of the Arkansas NAACP chapter. She was an expert organizer. Under Bates, the NAACP sued the Little Rock school board. Then she and her husband recruited nine students to integrate the all-white Central High School.

Bates took on the responsibility of preparing the “Little Rock Nine” for the violence and intimidation they would face inside and outside the school. She taught the students non-violent tactics and even became actively involved with Central High School’s Parent organization. When the students were barred from entering the school the first time, Bates created a strategy to protect them from protestors. 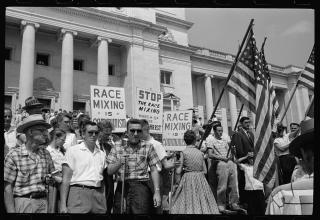 Protest at the State Capitol

Although the Supreme Court deemed segregation unconstitutional, the Arkansas governor refused to let the students enter. This clash between state and federal authorities culminated with President Dwight D. Eisenhower sending federal troops to protect the “Little Rock Nine.” With the protection from the federal troops the nine African American students were able to attend Central High School.