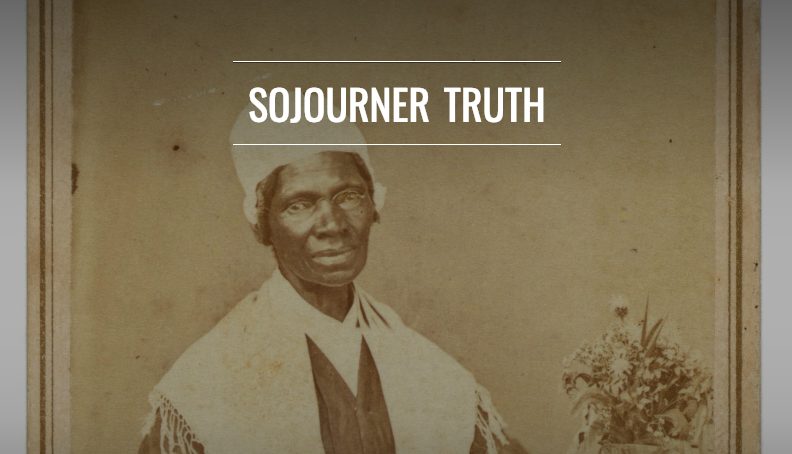 "At a time when most Americans thought of slaves as male and women as white, Truth embodied a fact that still bears repeating: Among the blacks are women; among the women, there are blacks." - Historian Nell Irvin Painter 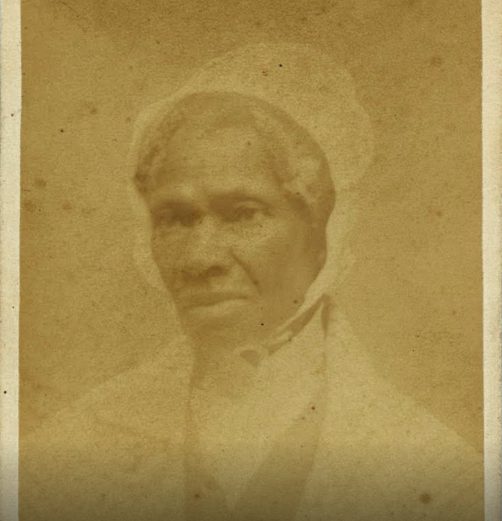 The Woman, The Myth, The Legend

As an itinerant preacher, abolitionist, and women's rights activist, Sojourner Truth spoke out against the injustices affecting various communities. Propelled by her faith, Truth traveled extensively to speak about her experiences as both a woman and a former slave. Although the most popular quotes attributed to her legacy are inaccurate, Truth's activism led her to become one of the most recognizable figures in American History. 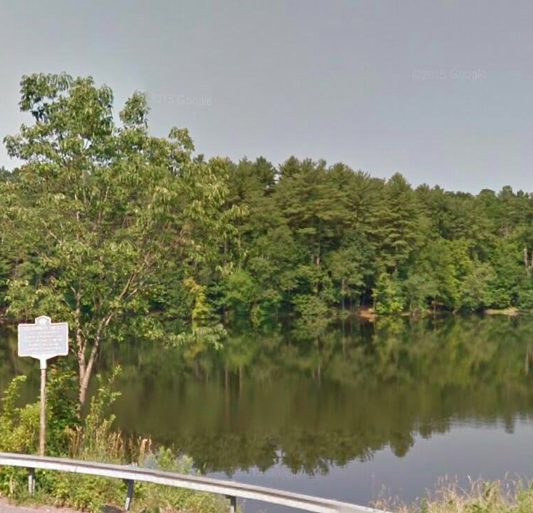 Sojourner Truth was given the name Isabella Baumfree at birth. She was born near Roundout Creek in the town of Hurley, Ulster County, New York. Although her exact birth date is unknown, it is believed that she was born around 1797 on the estate of Colonel Johannis Hardenbergh. The area no longer carries the physical evidence of Truth's birthplace, but a plaque in her honor commemorates this sacred ground. 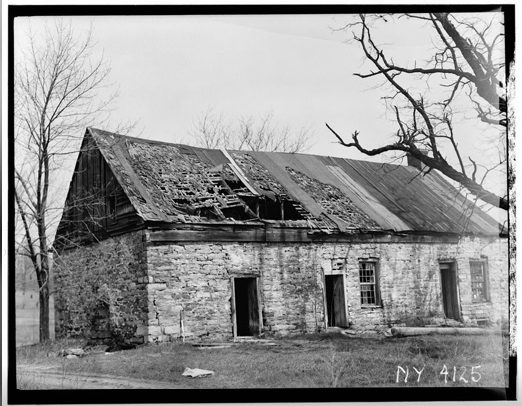 Colonel Johannis Hardenbergh owned six slaves on his estate (pictured, c.1933). At the time of Truth's birth, her parents James and Elizabeth were required to work on Hardenbergh's estate in exchange for a small cottage and farmland to cultivate crops. Shortly after her birth, Hardenbergh died and his son Charles inherited the estate. Charles removed Truth's parents from their cottage and kept them in the dark cellar of the main house with the rest of his slaves. 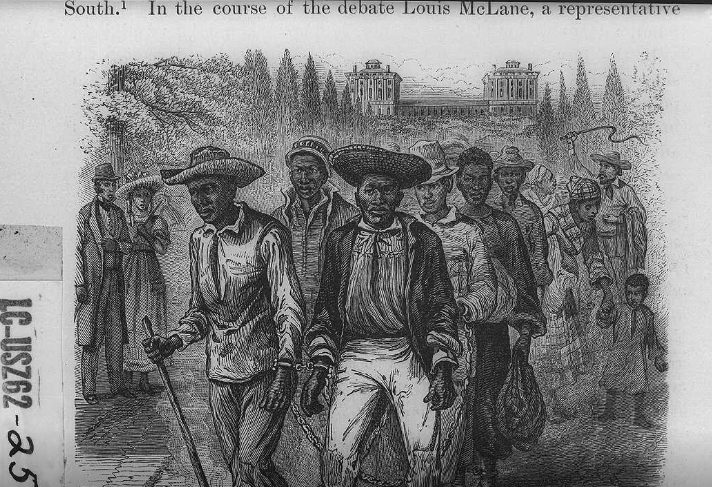 As the youngest of at least ten children, Truth's early life was marked with swift transition. Many of her siblings were "kidnapped" for sale, and Truth was sold for the first time at nine years old. She was sold twice within a two-year period before she was sold to her final master, John Dumont. 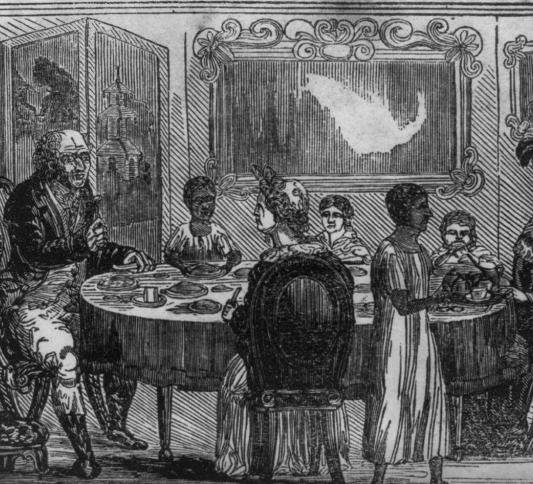 Family Amalgamation among the men stealers 1833. by George Borne

At the turn of the nineteenth century, enslaved Africans living in the rural areas surrounding New York State were often Afro-Dutch. This was true of Truth and her family, and their first language was Dutch. Unfortunately, when Truth was sold to her first master, John Neely, he and his family only spoke English. Truth recalls being brutally beaten frequently for not understanding their English demands. Over her lifetime, Truth learned to speak English fluently but never lost her Dutch accent or learned how to read and write. 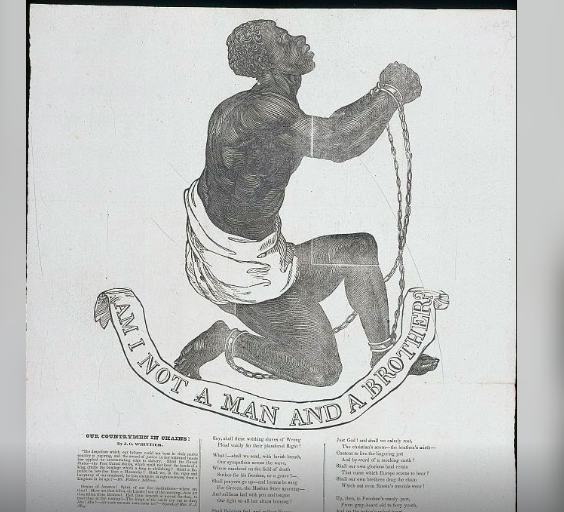 While enslaved by her last master John Dumont, Truth fell in love with an enslaved man named Robert from a neighboring farm. His masters, the Catlins, did not want Robert to have children that they could not benefit from and forbade the relationship. In her autobiography, Truth recalls Robert sneaking to Dumont's farm to visit her when she was ill. The Catlins found him and they "fell upon him like Tigers," tying his hands and severely beating him. After this, a somber Robert married a woman from the Catlin farm and Truth married Thomas from the Dumont farm. Truth had five children. 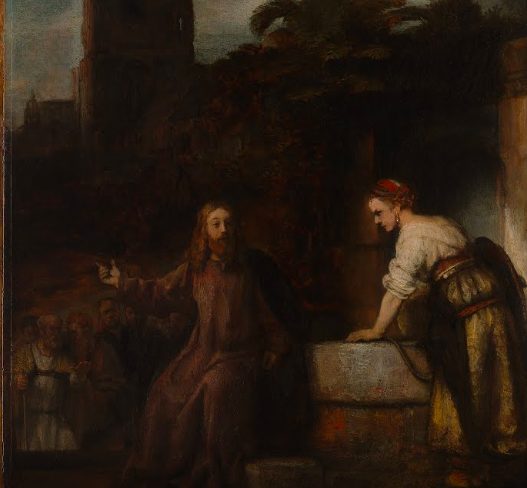 Christ and the Woman of Samaria by Rembrandt, The Metropolitan Museum of Art

After years of enduring physical and sexual abuse, Truth "walked" to freedom. Dumont had agreed to grant her freedom on July 4, 1826. When Dumont refused to release her, Truth emancipated herself. Inspired by her conversations with God, Truth left Dumont's farm just before dawn to get away undetected. Although Dumont pursued her, Truth was able to stay with the Van Wagenens who were members of the Klyn Esopus Dutch Reformed Church. Along her journey, Truth was "baptized with the Holy Spirit," and was compelled to change her name to "Sojourner Truth." Truth later dictated her autobiography called "Narrative of Sojourner Truth," and focused on her religious experiences that motivated her to seek justice. 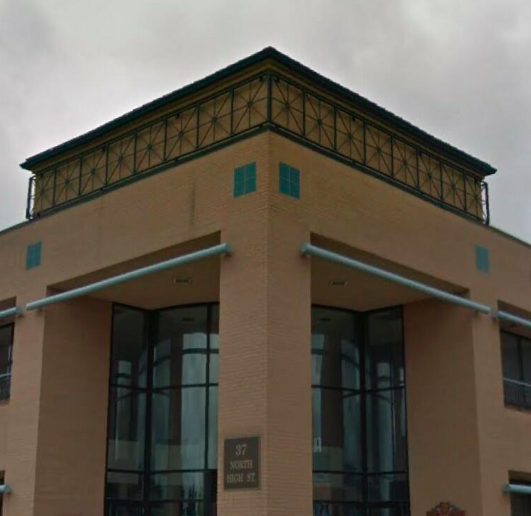 On May 28, 1851, a collective gathered at Old Stone Church in Akron, Ohio for the Women’s Rights Convention. Although she was uninvited, Truth spoke up during the meeting. Frances Dana Gage falsely reported Truth's infamous words a decade later in the New York Independent. Gage fabricated a speech entitled “Ar’n’t I a woman?” However, this speech solidified Truth as a champion of women's rights. 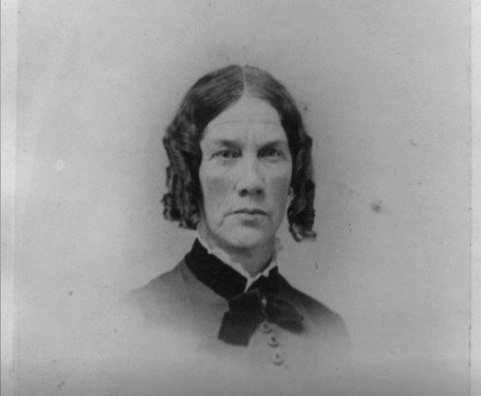 In Frances Dana Gage's report, Truth is said to have fiercely condemned gender inequality by detailing her strength, ability to work, and the loss of her thirteen children to slavery. Gage's portrayal documents Truth in 'slave dialect' and evokes imagery of the 'Mammy' stereotype of enslaved women. However, this inaccurate version has often been accepted as historical fact. 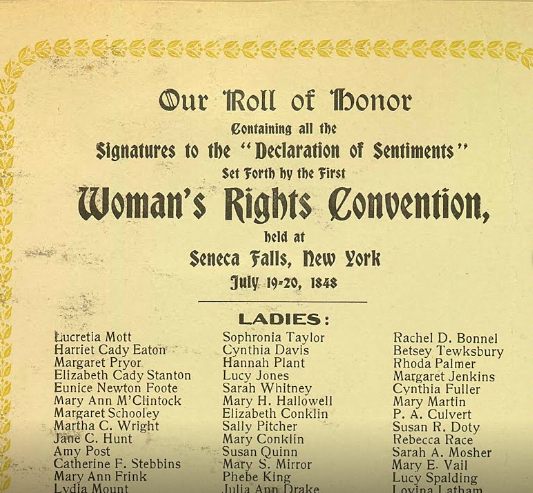 Our Roll of Honor Listing Women and Men

Truth attended and often spoke at meetings denouncing slavery and sexism. It is suspected that she also attended the 1848 Seneca Falls Convention. She maintained complex relationships with the leaders of various movements including; Frederick Douglass, Harriet Beecher Stowe, Elizabeth Cady Stanton, and William Lloyd Garrison. One of Truth's friends, Marius Robinson, published a more accurate account of Truth's speech in the Salem "Anti‐Slavery Bugle" only a few weeks after the convention of 1851. In 2017, Leslie Podell published "The Sojourner Truth Project," allowing users to compare the versions of the speech. The project also includes readings of Truth's speech by Afro-Dutch women in an attempt to capture what her authentic Afro-Dutch accent could have sounded like. In this more accurate address, Truth expressed similar sentiments of equality, but promoted the intellect of women. She did not state her ability to endure whippings or mention her five children. Note, Gage falsely emphasized Truth's "thirteen children." During the Civil War, Truth advocated for Union soldiers and assisted in the efforts of the National Freedmen’s Relief Association and the Freedmen’s Bureau. Truth was arrested in Indiana for violating Indiana State Law stating that no person of African descent can enter the state, even though the law was rarely enforced. She was released after ten days and continued to assist the efforts. In 1863, she went door to door to collect Thanksgiving food for the First Michigan Regiment of Colored Soldiers in Detroit. At the end of the war, Truth visited President Lincoln on October 29, 1864 in the White House. 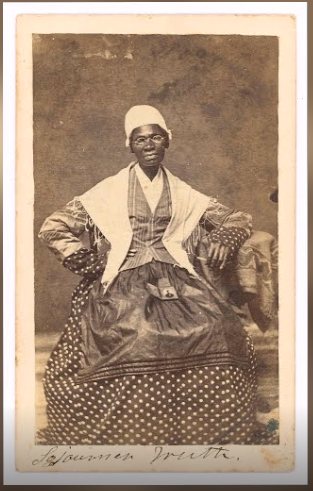 Truth's grandson, James Caldwell, also actively supported the Union. In April of 1863, Caldwell volunteered for the Massachusetts 54th, the first black regiment of Massachusetts. In this portrait, Truth is holding a photo of her grandson. 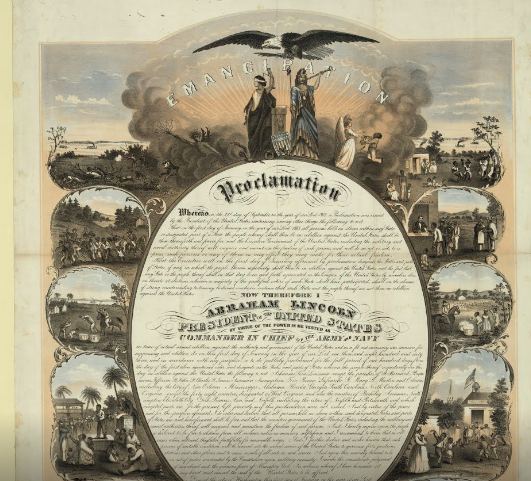 Emancipation Proclamation (1863)
by Library of Congress

The Emancipation Proclamation in 1863 did not mean retirement for Truth. She continued to advocate and speak out in the name of justice under God. She famously fought for issues such as the resettlement of freedpeople and women's suffrage. In her final years, Truth lived with her daughters in Battle Creek, Michigan. 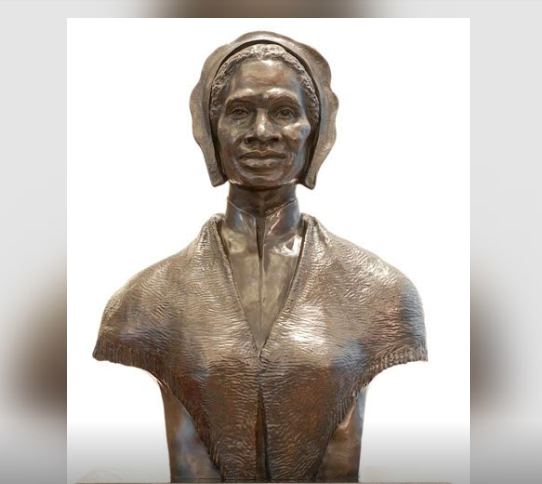 Sojourner Truth died of old age in Battle Creek, Michigan on November 26, 1883. Although Truth and her family believed she was one hundred and five years old, she was only about eighty-six. Since her death, Truth's likeness can be found on paintings, statues, and within the pages of history textbooks. Most recently, the US Treasury announced that Truth will be featured on the new ten dollar bill along with other suffragists. The design for the new bill will be unveiled in 2020 to commemorate the 100th anniversary of the 19th Amendment, granting women the right to vote.

Hull, Gloria T., Patricia Bell-Scott, and Barbara Smith. All the Women Are White, All the Blacks Are Men, but Some of Us Are Brave: Black Womens Studies. New York City: Feminist Press at the City University of New York, 2015.