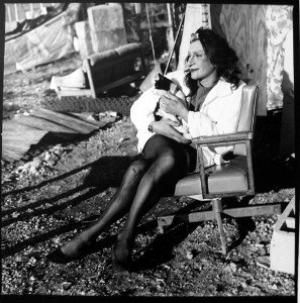 Rivera was born in New York City in 1951 to a father from Puerto Rico and a mother from Venezuela. She was assigned male at birth and given the name Ray. Rivera had an incredibly difficult childhood. Her father was absent and her mother died by suicide when Rivera was 3 years old. Raised by her grandmother, Rivera began experimenting with clothing and makeup at a young age. She was beaten for doing so and, after being attacked on a school playground in Sixth Grade by another student, suspended from school for a week. Rivera ran away from home at age 11 and became a victim of sexual exploitation around 42nd Street.

In 1963, Rivera met Marsha P. Johnson and it changed her life. Johnson, an African American self-identified drag queen and activist, was also battling exclusion in a movement for gay rights that did not embrace her gender expression. Rivera said of Johnson that “she was like a mother to me.” The two were actively involved in the Stonewall Inn uprising on June 28, 1969 when patrons of the Stonewall Inn—a gay bar in Greenwich Village in lower Manhattan—rebuffed a police raid and set a new tone for the gay rights movement. Rivera said in an interview in 2001 that while she did not throw the first Molotov cocktail at the police (a long-enduring myth), she did throw the second. For six nights, the 17-year-old Rivera refused to go home or to sleep, saying “I’m not missing a minute of this—it's the revolution!”

Rivera resisted arrest and subsequently led a series of protests against the raid. Yet this was not the first time Rivera was directly involved in activism. She said in a 1989 interview that, “Before gay rights, before the Stonewall, I was involved in the Black Liberation movement, the peace movement...I felt I had the time and I knew that I had to do something. My revolutionary blood was going back then. I was involved with that.”

The Stonewall Inn uprising was also a turning point in the visibility of the gay rights movement. The first pride parades started in 1970, but Rivera and other transgender people were discriminated against and discouraged from participating. In 1973, Rivera participated in the Gay Pride Parade but was not allowed to speak, despite the amount of work and advocacy she had done. She grabbed the microphone anyway, telling the spectators and other marchers, “If it wasn’t for the drag queen, there would be no gay liberation movement. We’re the front-liners.” She was booed off the stage.

Throughout the 1970s, she frequently tangled with gay rights leaders who were hesitant to include transgender people in their advocacy work. The Gay Activist Alliance (GAA), which formed in response to Stonewall, frequently rejected the role transgender people—the majority of whom were people of color—had played in the uprising. Rivera also fought against the exclusion of transgender people from the Sexual Orientation Non-Discrimination Act in New York. The final bill passed in 2002 and prevents discrimination “on the basis of actual or perceived sexual orientation in employment, housing, public accommodations, education, credit, and the exercise of civil rights.”

Along with Marsha P. Johnson, Rivera started the Street Transvestite Action Revolutionaries (STAR) around 1971. The group became a space to organize and discuss issues facing the transgender community in New York City and they also had a building, STAR House, that provided lodgings for those who needed it. Rivera explained in 1998 that she and Johnson “decided it was time to help each other and help our other kids. We fed people and clothed people. We kept the building going. We went out and hustled the streets. We paid the rent.” Although only 19, Rivera became a mother to many of the residents of STAR House. While short-lived, STAR House was an important space for those who needed it.

The troubles she experienced as a child followed her into adulthood. Rivera frequently experienced homelessness and had problems with substance abuse. At one point, Rivera attempted suicide. Her friend Johnson brought her to the hospital and helped her get healthy again. After this experience, Rivera left New York City and activism behind for a bit. She returned to the city in 1992 after the death of Johnson.

Once back in the city, Rivera got involved again with the fight for the inclusion and recognition of transgender individuals. She started Transy House, modeled off STAR House, in 1997 in Park Slope, Brooklyn. She also reconciled with the gay rights movement that was now expanding to embrace the LGBTQ+ community. She was given a place of honor in the 25th Anniversary Stonewall Inn march in 1994. Rivera said in a 1995 interview with The New York Times of participating in this parade, “the movement had put me on the shelf, but they took me down and dusted me off...Still, it was beautiful. I walked down 58th Street and the young ones were calling from the sidewalk, 'Sylvia, Sylvia, thank you, we know what you did.'” In 2001, she was marching in New York City Pride Parades and living in Transy House.

Silvia Rivera died of liver cancer in St. Vincent’s Manhattan Hospital in 2002 at the age of 50. Her partner, Julia Murray, was with her at the time of her death.

The Sylvia Rivera Law Project continues her legacy, working to guarantee “all people are free to self-determine their gender identity and expression, regardless of income or race, and without facing harassment, discrimination, or violence.” The intersection of Christopher and Hudson streets in Greenwich Village, two blocks from The Stonewall Inn, was renamed “Sylvia Rivera Way.” In 2015, a portrait of Rivera was added to the National Portrait Gallery in Washington, D.C., making her the first transgender activist to be included in the gallery. In 2021, New York City will unveil a monument to Rivera and Johnson. It will be the city’s—and according to New York City, the world’s—first monument dedicated to transgender individuals.

Willis, Raquel, “How Sylvia Rivera Created the Blueprint for Transgender Organizing,” Out Magazine, May 21, 2019, https://www.out.com/pride/2019/5/21/how-sylvia-rivera-created-blueprint-transgender-organizing.