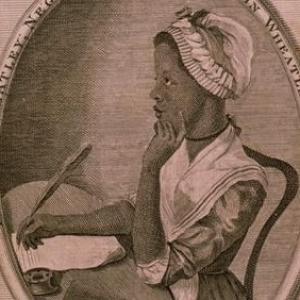 Despite spending much of her life enslaved, Phillis Wheatley was the first African American and second woman (after Anne Bradstreet) to publish a book of poems.

Born around 1753 in Gambia, Africa, Wheatley was captured by slave traders and brought to America in 1761. Upon arrival, she was sold to the Wheatley family in Boston, Massachusetts. Her first name Phillis was derived from the ship that brought her to America, “the Phillis.”

The Wheatley family educated her and within sixteen months of her arrival in America she could read the Bible, Greek and Latin classics, and British literature. She also studied astronomy and geography. At age fourteen, Wheatley began to write poetry, publishing her first poem in 1767. Publication of “An Elegiac Poem, on the Death of the Celebrated Divine George Whitefield” in 1770 brought her great notoriety. In 1773, with financial support from the English Countess of Huntingdon, Wheatley traveled to London with the Wheatley's son to publish her first collection of poems, Poems on Various Subjects, Religious and Moral—the first book written by a black woman in America. It included a forward, signed by John Hancock and other Boston notables—as well as a portrait of Wheatley—all designed to prove that the work was indeed written by a black woman. She was emancipated her shortly thereafter.

Wheatley’s poems reflected several influences on her life, among them the well-known poets she studied, such as Alexander Pope and Thomas Gray. Pride in her African heritage was also evident. Her writing style embraced the elegy, likely from her African roots, where it was the role of girls to sing and perform funeral dirges. Religion was also a key influence, and it led Protestants in America and England to enjoy her work. Enslavers and abolitionists both read her work; the former to convince the enslaved population to convert, the latter as proof of the intellectual abilities of people of color.

Although she supported the patriots during the American Revolution, Wheatley’s opposition to slavery heightened. She wrote several letters to ministers and others on liberty and freedom. During the peak of her writing career, she wrote a well-received poem praising the appointment of George Washington as the commander of the Continental Army. However, she believed that slavery was the issue that prevented the colonists from achieving true heroism.

In 1778, Wheatley married John Peters, a free black man from Boston with whom she had three children, though none survived. Efforts to publish a second book of poems failed. To support her family, she worked as a scrubwoman in a boardinghouse while continuing to write poetry. Wheatley died in December 1784, due to complications from childbirth. In addition to making an important contribution to American literature, Wheatley’s literary and artistic talents helped show that African Americans were equally capable, creative, intelligent human beings who benefited from an education. In part, this helped the cause of the abolition movement.